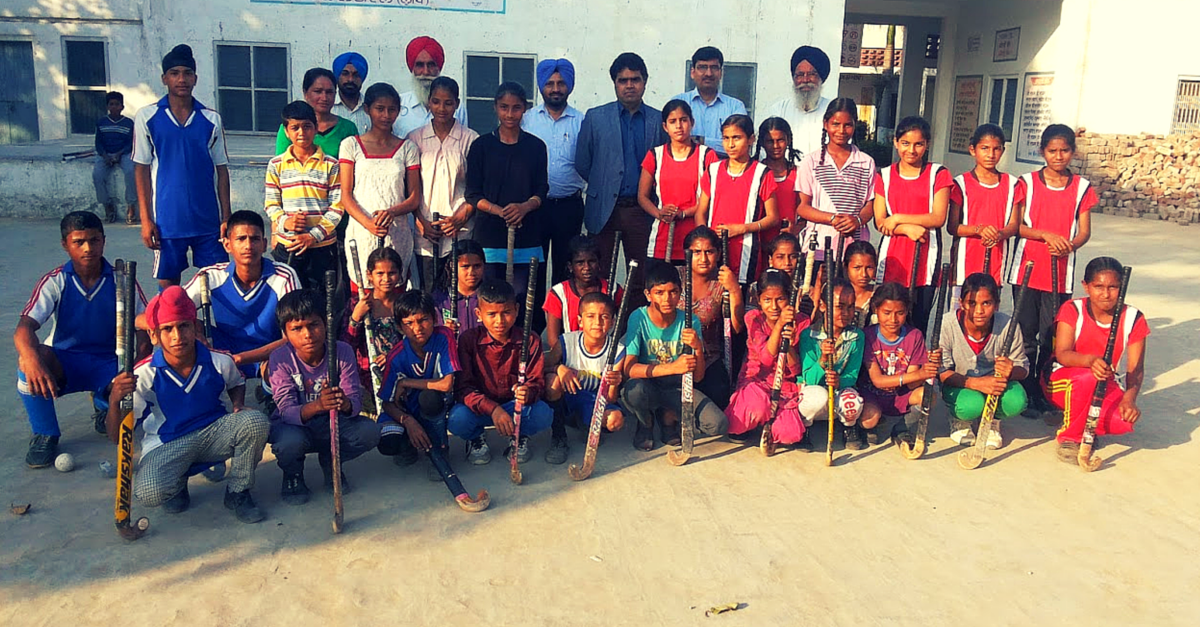 These children from the poorest strata of life in Jalaldiwal village, Ludhiana district, have found their calling through sports.

It is nearing 4 pm and the sun is still blisteringly hot! Even the birds are hiding beneath the camouflage and comfort of green foliage. But the whistle has been blown and slowly and confidently children have started making their appearance in the ground.

Some have new hockey sticks and some have ‘remnants’ of hockey sticks, most of the kids are not in proper attire and some don’t even have basic sports shoes. Even the ground is not as per specifications – it is less than half the size of a normal hockey ground.

But, so what? These children, who belong to the poorest strata of society, have found their calling! They know that it is through the game of hockey that they will be able to carve a place for themselves in life. The children of Jalaldiwal village in Ludhiana are indeed trying to make their mark through grit, perseverance and commitment. Be it summer or foggy winters, the children are on the ground by 4 pm to sweat it out.

The initiative to help these children who live below the poverty line and whose parents do menial labour, came from the local elders of the village. They were determined to help as many kids as possible to find a way out of their poverty-stricken lives and climb further up the social ladder.

For the children themselves, who are from marginalized communities and live on the fringes of society, an opportunity to associate with hockey turned out to be manna from heaven. The sheer fact that they could spend two hours of quality time every day in a sports activity, away from their hapless surroundings, became the motivation to appear every day on the sports ground in good or bad weather. For two months, they persevered without a coach and even without even proper diets to give them the stamina to play.

Seeing the commitment of the children, the influential residents of the village decided to bring in a hockey coach. Strings had to be pulled as no one wanted to come to a small village to give training to a ragtag group of underprivileged children. Finally, Baljeet Kaur — a product of the National Institute of Sports (NIS), Patiala, who was originally from the village — proved to be receptive to taking on the challenge. Her arrival brought about the catalytic change the children needed and their level of game started showing a qualitative improvement.

Glory finally came to the children when they made their mark at the rural games conducted in Ludhiana; they were able to defeat the defending champions belonging to Quilla Raipur village. Their performance put them in the spotlight and they started participating in many events taking place all over rural Punjab.

Two of the products of this village “academy” have now become idols for the children who play here. Jagtar Singh was selected to go to the Sports School, Ghoda. Although he was over-age to meet the criteria of admission (children up to class IX are admitted but he was already in class X), the school was impressed by the abundance of his talent and his commitment to the sport. Another child, Amritpal Kaur, was also selected by the Anmol Preet Kaur Sports Wing, Badal village (a sports academy being run in the village of the Chief Minister of Punjab — Shri Prakash Singh Badal). For both these children, life has changed for the better and both say that were it not for the academy they would still be doing labor activities with their families. Hockey has given them new hopes and dreams.

The fallout of the training received from this academy has been positive for the other children as well. They have developed a sense of self-confidence and the self-belief necessary to succeed in life. A sense of discipline prevails, manifest in their showing up at the hockey grounds even before time and working rigorously with the help of the coach. This has had a rub-off effect on their studies as well.

Seeing their success, a few local corporate houses have stepped in to provide them nutrition and quality food, and another organization has provided them with uniforms. Now they are awaiting a proper ground for their practice and once that happens, more success stories will follow for sure.

Impressed by the results obtained by this so-called academy (it still does not have the wherewithal that defines a conventional academy), an NRI has offered his land for development as a proper hockey ground for the children.

The people of Jalaldiwal village hope that this story will inspire other villages around the country to take up similar initiatives in their areas to help children from marginalized communities use sports as a vehicle for improving the lives of young children.

To learn more about the initiative taken by the residents of Jalaldiwal village, you can contact Nalin Rai at nalinrai@gmail.com