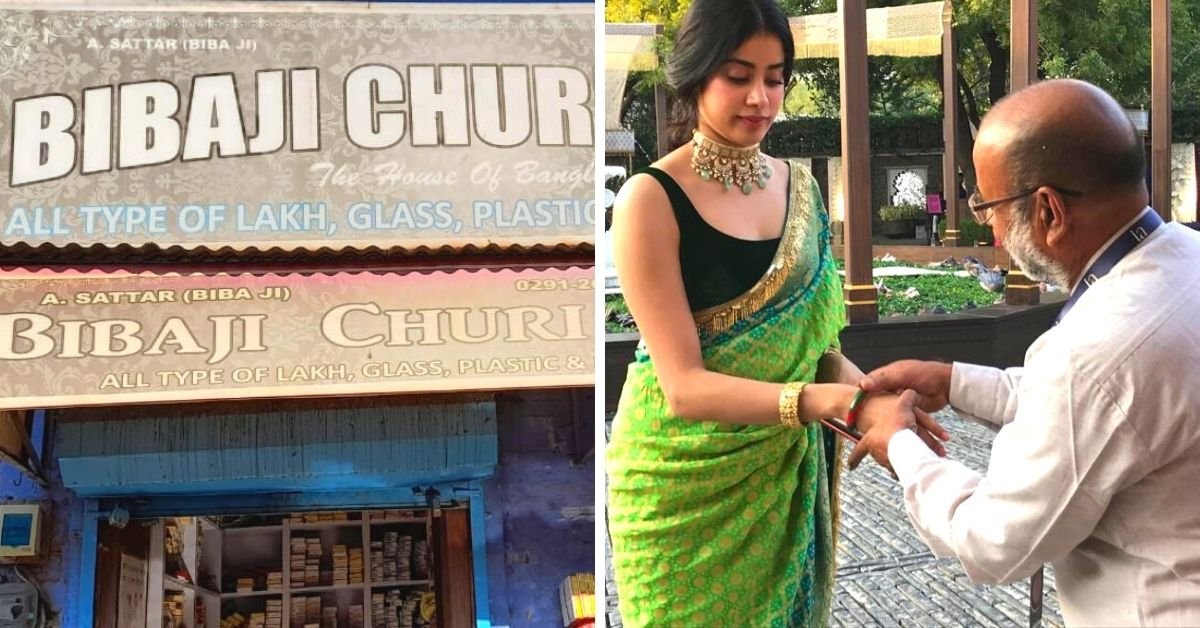 150 years ago in Jodhpur, Bibiji began supplying bangles to the royals. Today, her grandson carries on her legacy with the iconic Bibaji Churi Wale, one of the city’s oldest and most loved shopping destinations.

On the seventh day of my trip across Rajasthan, I arrived at Jodhpur, the blue heaven. While I’d powered through most of my shopping list, only one item remained – bangles.

“Do not forget to visit Bibaji Churi Wale,” read a line from an online article titled ‘Must Visit Shops in Jodhpur’. I was apprehensive, given that famous tourist attractions seldom live up to expectations. Regardless, I decided to drop by.

On a Sunday morning, I navigated the crowd of tourists and locals alike, assembled near the Ghanta Ghar, before stepping into a narrow lane, decorated with bangle shops on either side.

Outside one particular store, I spotted the old banner of Bibaji, with a proud proclamation that this tiny store had supplied bangles to the royal family of Jodhpur.

Before entering, I was asked to remove my shoes. There was no room to sit inside – almost every inch was occupied by colourful and delicate bangles.

“I hope you don’t mind if I place the bangle box on this stool instead of giving it to you to sit on,” said the owner, a man in his sixties. “The bangles are my source of livelihood, so giving respect to them is a priority.”

Abdul Satar Biba then went on to open his breathtaking collection of bangles, all laid out in different colours and designs – from lac to glass, kundan, plastic and crystal. He took his own time to show me each.

What struck me was the deftness with which he was able to zero in on what I would like, picking out a bangle that matched my taste to perfection. He must have caught on to my surprise. “Oh there is no magic to this. Our family has been mastering the art of identifying a woman’s taste in bangles for the last 150 years. My grandmother, who started this shop, was a pioneer who carefully nurtured our skills,” Abdul, locally known as Bibaji, tells The Better India as he rummages through stone-studded bangles.

From raja to praja: A shop for everyone

The shop holds special significance, for not only did Abdul’s grandmother establish her business here, but also set the precedent for visits from high profilers including the Jodhpur’s royal family and Hilary Clinton, he says.

But over a century ago, when Bibiji first set out on her endeavour with her visually impaired husband, little did she know she was moulding a legacy.

“Due to the purdah system, the women of the royal family would not be allowed to see men, or even be in the same room. They were not even allowed to attend bazaars. So most bangle makers would sell to locals and tourists. But since my grandmother was a woman, she decided to take a chance and marched towards the palace. Back then, the bangles would be tight and one would require a helper to put them on. With a basket-full above her head, Bibiji managed to enter the royal court, and became the helper. Since she was prolific at sales, she returned home with another order,” Abdul recalls.

Her son, Mohammad Baksh, would often accompany her to the palace to learn the tricks of the trade. The story behind how the shop got its name starts when Baksh took over from his mother in the 1920s.

“As I said, men were not allowed to meet the women, but my father was as a kid. His impeccable designs and innovative work caught everyone’s attention. Maybe that was the reason he was allowed inside as an adult. But it was hard for the family members to remember his name, so they modified Bibiji to Bibaji,” adds Abdul, also known as Biba. He joined the business in 1970.

The Bibaji family was arguably the first to offer crystal bangles in Jodhpur, Abdul says. They were also pioneers in gold work on bangles and cutting kada (thick bangle). At a time when their competitors were mass producing bangles, the Bibaji family was giving customised ones as per colour, size, shine and studs. Even today, they follow the same process.

Besides visiting the royal palaces, the family is often invited before or during weddings to make live bangles as gifts for guests.

“In most Rajasthani households, bangles are compulsory to wear, especially during weddings and for brides even after marriage. Of course, now the custom is not strictly followed, but it is still considered auspicious. That’s why as providers of bangles, we are treated with utmost respect. The newly wed brides even touch our feet during the ceremony if we are present,” says Abdul. In 2018, the family was invited to Udaipur for Mukesh Ambani’s daughter Isha’s wedding to make bangles.

A year later, he was invited by President Ram Nath Kovind during the inauguration of the High Court. “His daughter and wife loved our collection and purchased a lot of bangles. It was such an honour. In another instance, the Darbar Sahab (King) had himself stopped by at the shop during a padyatra 15 years ago. Such memorable events remind us of how fortunate we are to make bangles, which in reality is just another accessory,” he says.

Even as he casually reveals his daily revenue of upto Rs 8,000 a day, a sense of humility remains in Abdul’s voice. He takes pride in how people from all corners of India especially walk into his tiny shop to feel royal.