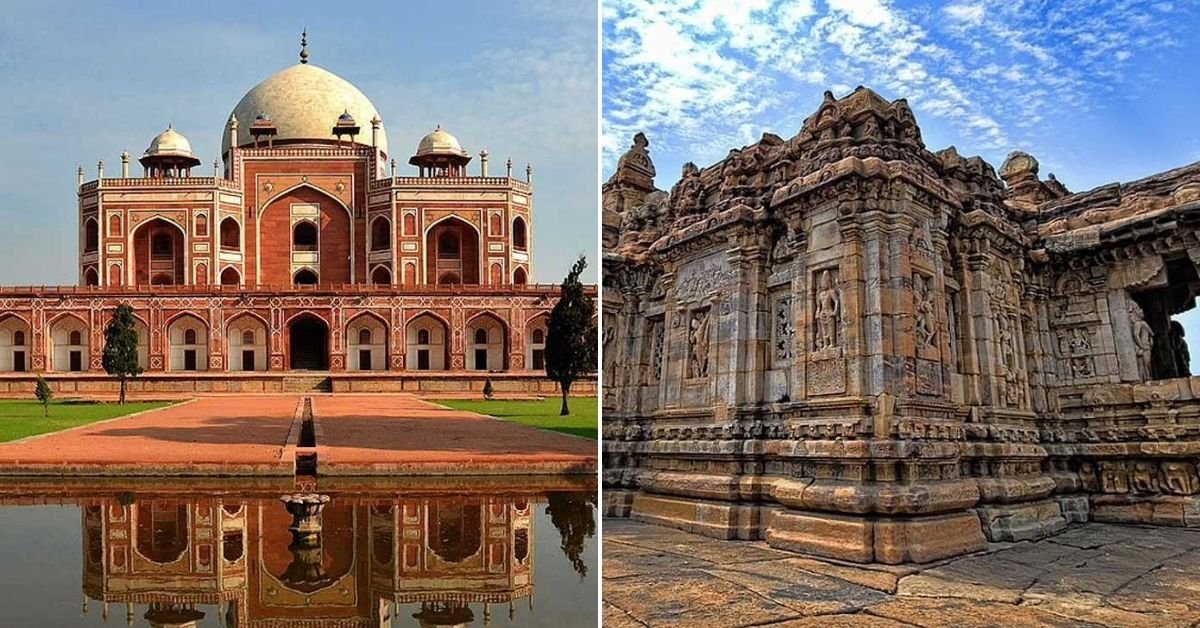 India has several historic monuments and structures that are known for their architectural elegance and rich socio-cultural heritage. While we hail the beauty of these structures spread across the country, we often forget about the stories behind these marvels.

History is rife with hundreds of examples of powerful male rulers paying homage to their loved ones through these monuments. But there is a list of famous historical monuments and structures that were built by women.

Here are nine such jewels that continue their legacy and the stories behind them: The Virupaksha Temple is the largest and most sophisticated out of the monuments in Pattadakal, a complex of Hindu and Jain temples in Bagalkot district of Karnataka. Dedicated to Lord Shiva, the temple was built by Queen Lokamahadevi in the 8th century to commemorate the victory of her husband Vikramaditya II over the Pallavas.

Occasionally, the Virupaksha Temple is referred to as ‘Lokeshwara Temple’ after the queen who constructed it. While Agra is known for the Taj Mahal, one of the seven wonders of the world, built by Mughal Emperor Shah Jahan in loving memory of his wife Mumtaz, there are a few other lesser-known monuments in Agra that are worth a visit. Situated in Patan, Gujarat, Rani ki Vav is a beautiful specimen of the Maru-Gujara style of architecture. It is built on the banks of the Saraswati River and is hailed for displaying the pinnacle of craftsmanship in stepwell construction. It has been designed as an inverted temple and is divided into seven levels with panels carrying intricate sculptures.

Rani Ki Vav was constructed by Rani Udaymati in the 11th century in memory of her husband, King Bhima 1, of the Solanki dynasty, which existed between 950 and 1300 CE. The Mohinishwara Shivalay Temple also known as Maharani Shankar Temple is situated in the middle of Gulmarg town in Kashmir valley. Located on a small hill, with the backdrop of beautiful snow-clad mountains, this temple was built in 1915 by Maharani Mohini Bai Sisodia who was the wife of the then king of Kashmir Raja Hari Singh who belonged to the Dogra dynasty. The temple is built in such a way that it’s visible from all corners of Gulmarg. Located on the banks of Aghanashini River, this monument in Uttar Kannada district of Karnataka is known for its remarkable architectural elegance. Known to have witnessed several battles in the past, this historic monument is believed to have been built by Queen Chennabhairadevi of Gersoppa, also known as the pepper queen of India in the 16th century. The Queen who stayed in the Mirjan fort used it as a location for shipping pepper and also to take care of her business. Belonging to the clan of Tuluva-Saluva she ruled for 54 years under the Vijayanagara Empire as the queen of Gersoppa. The Mahim Causeway in Mumbai was built between 1841-1846 to connect the island of Salsette with Mahim. The area between the two islands was swampy and dangerous and many lost their lives while crossing Mahim and Bandra on ferries, thus raising the need for a causeway. But when the British East India Company refused to fund the project it was Lady Avabai Jamsetjee Jeejeebhoy, wife of the first baronet Sir Jamsetjee Jeejeebhoy who donated a total cost of Rs 1,57,000 to build a causeway. The Mahim Causeway later became and still is an important lifeline of the city of Mumbai. This mosque situated in the outskirts of the city of Jaunpur in Uttar Pradesh was built by Rajye Bibi, the queen of Sultan Mahmud Sharqi in 1447 and was dedicated to Saint Sayyid Ali Dawood Kutubuddin. Though the design and architectural style of Lal Darwana Masjid resembles the Atala Masjid, it is smaller in size than the other.The mosque got its name (‘Lal Darwaza Masjid’ or Ruby Gate mosque) from the vermilion-painted gateway of Queen Bibi Rajye’s royal palace that stood adjacent to it.

The Queen was also known for establishing a religious school near the Lal Darwaza in Jaunpur, named Jamia Hussainia that still exists. Situated in New Delhi, this historical mosque was built in 1561 by Maham Anga, one of Emperor Akbar’s wet nurses and an influential woman in his court. A fine piece of Mughal architecture, the mosque is a two-storied structure built around a large rectangular courtyard with a prayer hall on the west side. One of the highlights of this mosque is the massive gateway built using red sandstone. The tomb of the Mughal Emperor Humayun in Delhi is the first garden tomb on the Indian subcontinent. After the death of the Mughal emperor Humayun in 1556, Hamida Banu Begum (also known as Haji Begum) commissioned the tomb in 1569. Considered a landmark in the development of Mughal architecture, this grand red sandstone mausoleum was designed by a Persian architect named Mīrak Mīrzā Ghiyās and is believed to have inspired many monuments including the Taj Mahal.