A Friend’s Betrayal & One Pushcart: The Story Behind Chennai’s Iconic Seena Bhai Tiffin Seena Bhai Tiffin Centre in Chennai might be an iconic eatery today, but its origins come from one pushcart and nothing but hard work. Here's the story of how Srinivas and Ammal built an empire of delicious oothappams and idlis.

The story of Chennai’s popular joint Seena Bhai Tiffin Centre is nothing short of a movie — an “aww”-inspiring rags to riches story that has love, a villain, betrayal and a happy ending, with a unique addition of finger-licking ghee soaked oothappam and idlis.

The story began in the late 60s, when Vadamalpettai’s Srinivasa Naidu and Sathyavathi Ammal from Rajahmundry migrated to the Gateway of South India, Madras (now Chennai). The two arrived in the city for work separately, but at the same time.

While Srinivas began working as an attendant buying cigarettes and tea for members of the MUC Club, Sathyavathi took up a job as a domestic help.

“My parents used to take the same route while returning home, and would eye each other while crossing the path. Eventually, they fell in love and got married,” Solomon Santhanam, one of the four sons and owner of Seena Bhai in Sowcarpet, tells The Better India.

‘With only a pushcart as his prized possession’ 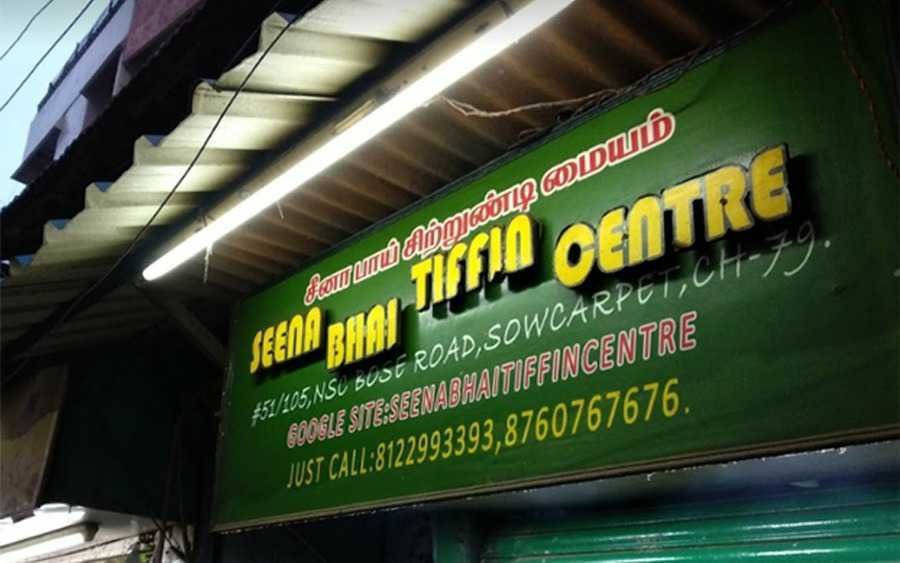 Meanwhile, Srinivas’ hard work and quick learning caught the attention of a club member who hired him as co-partner in another club in the early 1970s. Just as his life was coming on track in terms of finances, a friend reached out for monetary help.

“The friend had incurred losses, so my dad helped him set up a pushcart tiffin shop opposite the club in 1976. However, the friend stole my father’s money and went rogue, leaving him with nothing. Things became worse when the Indira Gandhi administration shut down clubs. With only a pushcart as his prized possession, my father opened a food stall. It was christened ‘Seena Bhai’ because the club members, especially those from north India, addressed my father as that,” Santhanam says.

Srinivas and his wife channeled their inner chef and used recipes that were traditional to their receptive natives. The idea was to offer something that wasn’t already available.

At 40 paise, the couple sold idlis and oothappam along with chutneys prepared in Andhra style. While Srinivas mastered the vengayam chutney (onion chutney), Ammal prepared her signature pudina chutney.

Sowcarpett, where the shop was located, is a neighbourhood that was once predominantly occupied by marwaris and north Indians, who all found solace in Seena Bhai’s delectable vegetarian meals. Over time, the couple was able to create such a rapport with their customers that they did not mind amending their preparation styles to suit someone’s tastes. In fact, it was on the suggestion of a customer that Srinivas permanently switched from oil to ghee, giving the centre the final version and most loved version of its signature dish. For several years, he prepared the ghee at home, and presently, they order from Andhra Pradesh.

Srinivas also added paruppu podi (powder) as a lip smacking accompaniment to the existing dishes. As the number of customers increased over time, the couple leased a piece of land belonging to a local temple trust in 1999 to set up a new space. All four sons of Srinivas and Ammal were engaged in the restaurant from early on. Santhanam says it was his genes, coupled with the curiosity to decode ingredients, that got him interested in the venture early on.

As a child, he would observe his mother cook and take mental notes of every step. He started with boiling rice and mixing curd for curd rice. For a brief period, he even worked in other hotels to learn more about the administration, quality, and customer service. Though he dropped out after Class 9, he says his learning process still continues, thanks to food-related channels on YouTube.

Santhanam runs two Seena Bhai Kitchens across the city with his sister, V S Varalaxmi. His brother, V S Raghupathy, ran five outlets of Seena Bhai 1977, of which only one is running due to COVID-19 induced lockdown. “Idlis and oothappam continue to be our best selling items. My father used to make four oothappam at once back then. Seeing the high demand we had to purchase a tawa that made 36 oothappam. The other shop, Seena Bhai 1977, sells chaat and juices. Some of their bestselling items are pani puri, grilled toast, cheese toast, elaneer payasam, hot and cold badam milk,” says Santhanam.

Despite having a limited menu, Seena Bhai Tiffin Centre continues to have a stronghold. What is their secret recipe?

“The real ‘secret’ behind our food is that we make ‘human comfort’ our main ingredient. I do not let my staff call me ‘boss’ or ‘owner’ because the customer is our ‘owner’. We treat them as part of our extended family by addressing them as ‘bhai’, ‘anna’, ‘akka’, etc instead of sir and madam,” he adds.

The strict adherence to this “customer first” policy is such that Santhanam didn’t think twice before shutting down an entire outlet due to an employee’s mistake.

In 2018, despite a no non-vegetarian food policy,  a staff member prepared egg dosas at the Purasawalkam outlet. When a nutritionist raised a flag, he closed the outlet immediately.

There are several such instances to show that Srinivas and Ammal’s authenticity lives on in this eatery, even years after they have passed away.

Santhanam shares his most cherished memory of the time when they were pleased to know their real value.

“Ramasamy Udayar, an industrialist, and my father were friends. Udayar’s children invited our staff to supply food for a high profile party. At the venue, there were caterers from a five star hotel, and naturally, we felt very small. Actor and politician Arun Pandian walked to our stall, and enjoyed our food with his wife and children. The other hotel staff were surprised and asked us our hotel name. I replied, ‘Blue Star Hotel’ as a joke. That incident gave us the confidence to believe in our work rather than status,” he recalls. From making six oothappam at 40 paise to now earning Rs 25,000 daily, Seena Bhai Tiffin Centre has come a long way. If this does not define the spirit of the saying Vandharai Vazha Vaikkum Chennai (Chennai gives life to whoever comes here), then we don’t know what does.

With inputs from Sai Sudharshan.

All the images are sourced from Santhanam.