Arvind Gupta: Teaching Science by Creating Toys from the Trash Can 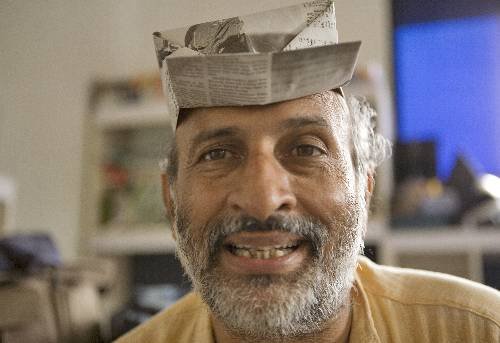 Science owes a great debt to imagination. Many great inventions and discoveries would never have come about if some day dreamer hadn’t imagined it first. Sitting in a classroom, or

Science owes a great debt to imagination. Many great inventions and discoveries would never have come about if some day dreamer hadn’t imagined it first. Sitting in a classroom, or a laboratory or under an apple tree, wondering… ‘What if’?

Back in the late eighties when I was still in the single digits, my father bought me an junior science encyclopaedia and a book called 101 Science Experiments. Considering that it was the pre-internet era, I read and re-read those books many times over the years, eventually learning more from them than I ever did inside a classroom.

Few in our country are lucky enough to have access to good books and great teachers. Fewer still if you assess the availability of good books about science in Hindi and other regional languages, and the state of our schools’ science labs and computer facilities.

When Arvind Gupta, an IIT Kanpur electric engineering alumnus, quit his job at Telco, his mother came to his defence stating ‘good, now he will do something noble with his life’. A prophetic statement from a woman who never had a day of formal education in her life but ensured that her four children excelled academically.

For almost 30 years now, Arvind Gupta has been taking his love for science and learning to the children of India. He’s the dream teacher we all yearned for. Gupta has travelled to over 3000 schools, demonstrating captivating science experiments to wide eyed children. What sparks their imagination further is that Gupta uses only everyday garbage as the building blocks of these experiments.

“All teaching aids we use are hand made. It‘s important for children to see that you don‘t need fancy materials. Science can also hep you look critically at materials that are often considered trash, there is a lot of learning in that itself”.

An empowering lesson for his pupils who are of limited means. They watch him in amazement as he explains everyday phenomenon like light and its laws of convergence and divergence with only used up ball-point pen refills, rubber slippers, empty tetra packs and anything else he can lay his talented hands on.

He takes trash and creates unforgettable experiments and experiences for children. An encore purpose for everyday trash is a wonderful by-product of his work.

Gupta believes that a love for science and the hunger to learn isn’t just the prerogative of the English speaking elite. On his website Gupta hosts thousands of books on science, that are free to download. Many of which he has painstakingly translated to Hindi himself. There are books in over a dozen regional languages too. The site also boasts over 700 science projects with videos, pictures and instructions. More than 6000 books are downloaded each day!

He explains phenomenon like light and its laws of convergence & divergence with only used up ball-point pen refills, rubber slippers or empty tetra packs!

He also distributes CD’s packed with a massive collections of e-books and videos to the schools he visits. Often, these are the only teaching aids they have ever received or used. The keenest minds of our country might be hidden away in a broken down municipality school, in a town you and I have never heard of. A tryst with Arvind Gupta could open their eyes to endless possibilities and give them the chance to dream, despite their limiting environment.

Gupta’s dedication, perseverance and brilliance have not gone unnoticed. He has been recognized by organisations such as UNESCO, UNICEF, International Toy Research Association, Boston Science Centre, Walt Disney Imagineering and Research. He has received a special award given by the National Association for the Blind for designing teaching aids for pre-school blind children and the Ruchi Ram Sahni Award for science popularisation, among others.

“I have an enduring passion for my work because it allows me to reinvent myself. Every child has a dream in their eyes, and each of them instils a hope in me about the future”, he shares.

In true Gandhian spirit, Gupta signs off all his communication with the words ‘with love and peace’. He certainly lives by them.

Tithiya Sharma is a former journalist turned backpacking blogger who’s traveling the world looking for adventure and inspiration. She’s using social media for social good as she finds and meets a hundred everyday heroes and discovers a world worth saving. Check out her quest for inspiration: The 100 Heroes Project.