At 21, This Farmer’s Daughter Is Cycling 1500 km Across Drought-Prone Area; Here’s Why 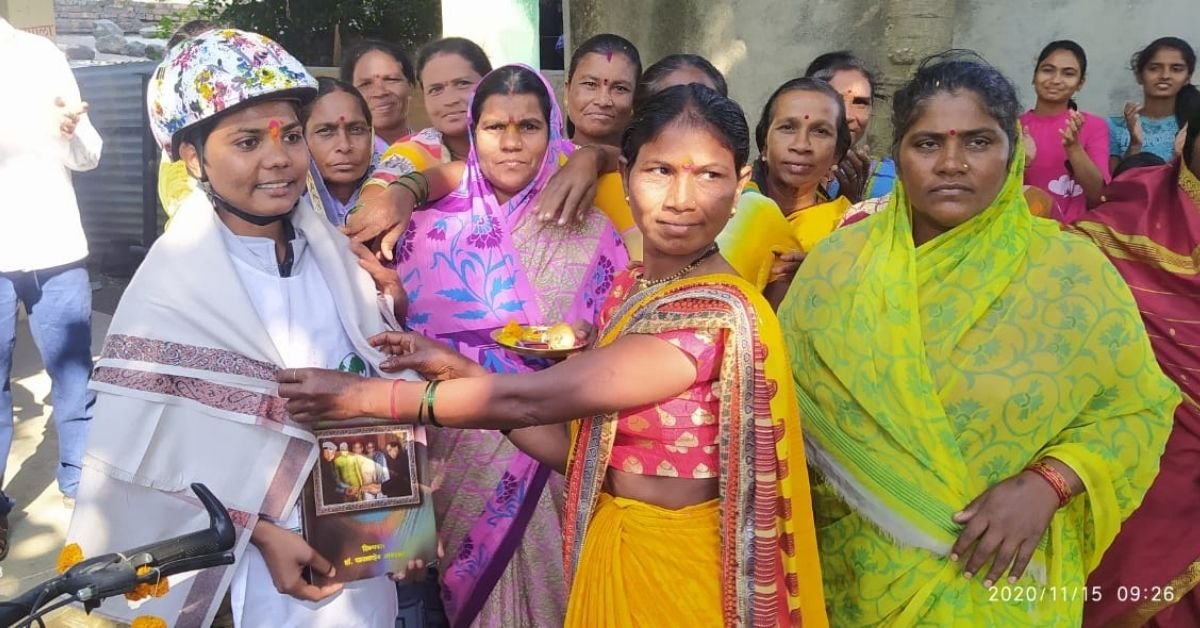 Pranali Chikte from Vidarbha, Maharashtra, is cycling her way through drought-affected villages of the Western Indian state, spreading awareness on water conservation and the role of women in farming.

Immediately after her graduation in December 2020, 21-year-old Pranali Chikte from Yavatmal district of Vidarbha region in Maharashtra, embarked on a journey that changed her life. As she cycled her way through drought-affected villages of the Western Indian state, she started spreading awareness on water conservation and the role of women in farming. In the last nine months, Pranali has cycled for over 1500 kilometers, covering 23 districts in Maharashtra.

Born to a family of farmers in Punvat village, Pranali has been a witness to the struggles of the farmer community in the state. “It’s not a good place to be. There’s widespread distress in Vidarbha; the Marathwada region is also going through a terrible time. Unpredictable rainfall patterns and failed monsoon seasons have resulted in drought. The burden on farmers has increased two-fold,” says Pranali, who has decided to study the state of agriculture and environment in Maharashtra while traveling on her cycle.

“I am the youngest of the three siblings — all girls. We have grown up working in the field doing laborious work and helping our parents on the farm after school hours. As we grew, engaging in labour was not a choice we could make. Today, my eldest sister is pursuing engineering while my other sister works in a glass factory,” shares Pranali, who has completed her graduation in Social Work.

Vidarbha’s agricultural crisis is perennial; the farmers are suffering due to cash crops. The cotton farmers in the region are unable to recover even their cultivation costs.

The fertilizer prices have doubled, and pesticide costs continue to soar. It takes over 20,000 litres of water to produce just one kilogram of cotton. In 2019, Pranali’s family had sown cotton, but they were unable to provide enough water for the crop. As a result, the yield was less than what they had expected. In 2018, the yield was 90 quintals while in the year 2019 they were able to reap only 20 quintals of cotton.

To understand the root cause of the issue, after her graduation, Pranali wanted to study the water plan developed by the Panchayat of her village but due to the COVID pandemic, her work was halted. “The disastrous situation of agriculture in my state has been haunting me for a couple of years. The idea of embarking on a journey to study Maharashtra’s agriculture practices was brewing in my head for a long time. During the lockdown I had enough time on my hands to plan my tour,” says Pranali.

She continues, “During my formal education, I didn’t get answers to any of the questions that had been lingering in my mind for years. Environment as a subject was never handled thoughtfully and that saddened me. Agriculture is not even a part of our curriculum and after spending 15 years in formal education, I don’t feel the need to continue. I would rather do farming which allows me to experiment.”

Initially, Pranali’s parents were quite concerned after they learnt about her plan. But Pranali insisted on a dialogue after which they gave a go ahead. Now that she has covered half of Maharashtra, their anxiety has been put to rest. They eagerly await her phone call and listen to her accounts of the day. When she is featured in a newspaper, they try to get hold of a copy. Her mother has maintained a file of the paper cuttings in which her endeavor has been featured.

Pranali has inherited the wisdom of traditional farming from her parents. Having grown up working in agriculture fields, she understands the soil and its needs. “The age-old farm implements never harm the earth. Earlier, farmers would use a traditional instrument — a locally made nipper for removing the cotton plant. It was a time-consuming process, but it did not damage the earth whereas clipping with the help of a tractor does. It’s not a viable option,” explains Pranali, an avid advocate of sustainable farming.

“Earlier, farmers were doing well when subsistence farming was in vogue. This practice should be supported by the government. If you have 20 acres of land, at least 10 acres should be used for subsistence farming. The rest can be used for growing cash crops. This age-old practice has lost ground. Now agriculture is equated with cash crops. This has led to farmers’ dependency on markets for staple food. One cannot eat cotton; can they?”

During her tour, she came to know that in Khandesh – the northwestern region of Maharashtra, subsistence farming along with cash crops is being practiced. “But there’s competition everywhere. Every farmer in the village wants to grow more than what their neighbors are growing. They compete and for better yield, they use pesticides and chemical fertilizers. One of the farmers, who considers himself the best, informed me that he uses chemical fertilizers. How does that make him the best of the farmers? What about the degrading quality of the soil?” The farmer in Pranali observes and analyses these issues.

When she speaks with the villagers about sustainable farming, environmental degradation and changing climate conditions, they seem aware, however, their practices are contrary to their awareness.

“Of course, the system has an important role to play and that such policies should be drafted that help address the situation, but it is the awareness about individual role which is missing. Our role as responsible citizens will decide our future,” says Pranali.

One way to address this issue, Pranali believes, is by teaching agriculture to children. “School education is theoretical while farm work provides practical experience. They learn where their food comes from, understand the hard work behind it and the responsibility that comes with it. They understand the importance of the right weather conditions. The allegiance of children with mud will nurture them into better human beings.”

Women: The Backbone of Farming

One of the biggest concerns Pranali has with agriculture is that the labour of women goes unrecognised. When Pranali visits the villages and farms she doesn’t find many women to talk to. Agriculture is made out to be a man’s domain. “If women had the power to decide they would choose sustenance farming over cash crops. We are the backbone of agriculture but are not given the due credit,” shares one of the woman farmers from the Konkan region.

Pranali has learned during her travel that the part women play in agriculture is completely overlooked and their contribution is taken for granted. They are not involved in the decision-making process, nor their ideas are considered. But in families where men migrate, it is the women who take charge. These women favour subsistence farming to ensure that their families do not sleep empty stomach. History tells us that farming was imagined and discovered by women. The technique of ploughing too was developed by women. Despite this great discovery women don’t have ownership rights. Pranali’s project aims at advocating for rights and recognition of women farmers.

“Hopefully, my plan of visiting all districts of Maharashtra will be completed by December 2021. Post that, I would like to get into sustainable farming. I wish to involve college students in my farm experiments. I can’t make predictions about any other sectors, but I am confident that future lies in farming. It is the answer to the biggest threat we face today – food security. Along with policy level changes, there is an urgent need to recognize the hard work of women farmers and ensure them land ownership rights,” shares Pranali.