Forgotten Pioneer Who Launched An Airline To Ferry Refugees During Partition 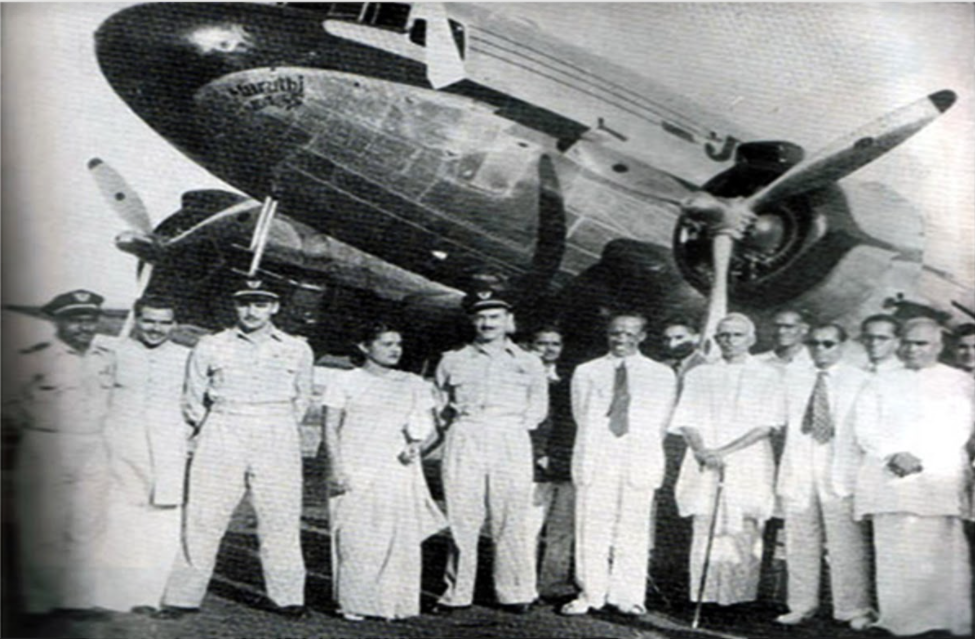 As the country marks its 75th Independence Day, Dr Alagappa Chettiar’s grandson, Dr Ramanathan Vairavan, sits down to honour his grandfather, a man whose contributions to a newly-Independent India have been monumental.

Every year on 6 April, residents of a small village named Alagappa Nagar—originally a township for the staff of the Cochin Textile Mill, near Thrissur district, Kerala—cut a cake to honour the birth anniversary of a man who changed their lives forever over a century ago. Born in 1909 in Karaikudi, Tamil Nadu, this man was only in his 20s when he arrived in the village, and built homes, schools, temples and a polytechnic for the residents of the village. His name was Dr Alagappa Chettiar.

Now, as the marks its 75th year of Independence on Sunday, Dr Chettiar’s grandson, Dr Ramanathan Vairavan—who wrote a book on his grandfather’s life in 2015, called Alagappa: A Beautiful Mind—sits down with The Better India to honour his grandfather.

Though his story is lesser-told, his contributions to a newly-Independent India have been monumental.

“To him, life was all about giving,” Dr Vairavan, currently based in California and the chairman of the Alagappa Group of Educational Institutions, says, “He went through a lot of struggles and challenges, mainly due to health reasons. My grandfather wanted to be in the Indian Foreign Service, for which went to the UK to study.”

There, Dr Chettiar developed a skin disease called Hansen’s Disease, also known as leprosy. “Today, even if you have one pimple, you’d try to hide it. But back then, his entire face was disfigured, and that too in a land that already hated Indians,” Dr Vairavan notes. While Dr Chettiar passed his exams, he failed the physical due to his skin condition. However, this did not demotivate him — instead, he went on to pursue a law degree.

This, Dr Vairavan notes, was the point where things changed for his grandfather. He came from an extremely affluent family, but wanted to use his wealth for the greater good of the nation.

Dr Chettiar returned to India, particularly to Kerala, where he rebuilt Alaggapa Nagar. “When I went to the village a few years ago, they told me that there was no one who could have done for them what he did. This was very early on in his life as well, he was barely 27 or 28,” Dr Vairavan says.

Through his life, the businessman launched many ventures — the Alagappa Textiles in Kerala, rubber plantations in Malaya, tin mines in Burma, insurance companies in Calcutta, theatres in Madras, hotels in Bombay, a stock exchange company and even a private airline.

A fleet of aircrafts for a new India

Dr Chettiar always had a fascination with flying, and when he was in London, he obtained a pilot’s license in Croydon. Years later, in 1947, this very fascination gave India the Jupiter Airlines. “When he was active in the stock market, he bought over Jupiter Airways, which had a fleet of Dakota aircrafts. He started the airlines for mass transit,” his grandson says.
At the onset of the Partition of India, Dr Chettiar was the first to offer his aircrafts to the government to evacuate families from Pakistan. The Indian Army was also in need of aircrafts for their troops, and Dr Chettiar’s flights carried Army personnel, armour, resources and refugees alike.

Dr Vairavan says that during one particular mission, one of the Jupiter Airlines planes crashed. “One of his managers came to him and said, ‘Sir, the plane has crashed. The insurance company did not cover the crash, as the plane was only insured for civilian duties.’ But my grandfather wasn’t concerned about that. His only and immediate response was — ‘We have another plane, send that’. So it was never about the money for him. He was just concerned with doing the right thing.”

The Hindu reported that in 1948, Jupiter Airways received its license to fly passenger routes from Meenambakkam, which became among the first few cities in the country to have an airport. “The flying time to Delhi via Vishakhapatman and Nagpur was approximately eight hours, and the pilots were paid Rs 40 every hour for flying,” the report said.

Dr Chettiar sold his airlines in 1953, a few years before he passed, when the Indian Airlines was nationalised.

One tool to change the nation

When the Government of India was rebuilding the nation after the British left, Dr Chettiar saw education as a tool that would prove instrumental in this change. He formed the Alagappa College of Technology in Chennai, now part of Anna University. Here, they offered courses in chemical engineering, textile, and leather technology. “He did not want to give money to someone else to get things done. He took all of the responsibility upon himself,” Dr Vairavan notes.

At this time, Dr Chettiar did not receive much support, Dr Vairavan says. “They thought he was crazy, just giving away his money like that,” he says, adding that though he came from privilege, all of his accomplishments were his own.

Dr Vairavan also recalls a particular incident that inspired the famous free Midday Meal Scheme in Tamil Nadu. When Kumaraswami Kamaraj, the man behind the schemes, visited Karaikudi, he saw that Dr Chettiar had been handing out free food to all the students at the university during lunch. Kamaraj thought this idea was so brilliant that it inspired the Midday Meal Scheme all over the state, Dr Vairavan says. “The original idea came to him from his visit to Karaikudi,” he adds.

Dr Chettiar’s work saw admirers in Gandhi and Nehru alike. “He convinced Nehru to establish the Central Electro-Chemical Research Institute in Karaikudi,” Dr Vairavan says, adding, “At the same time, Tata and Birla were trying to set the institute up in Bombay and Calcutta, respectively. But here, Dr Chettiar did this not in a city like Chennai or Madurai, but the small town of Karaikudi. The committee overseeing the setting up of the institute had many doubts, since such a university in a small town would come with many challenges. But Dr Chettiar straightaway offered 300 acres of land and Rs 15 lakh. And so, Nehru agreed.”

Today, CECRI has over 650 PhD electro chemists, and the university has changed the entire profile of the small town, Dr Vairavan says.

He adds that over 30 lakh students have graduated from all the Alagappa University institutions. Dr Vairavan notes, “I always knew he was wealthy and a philanthropist, but his influence on my life came much later. He passed away when I was only seven or eight years old. It was only when I sat down to write a book on him that I realised how monumental his contributions have been in shaping the nation. Most of his peers had already passed away by then, so I approached a journalist to help me out. We dug into the archives in Delhi and Chennai and pieced his life back together. But when we put it all together, it seemed more like a news report. So I reworked the content. That’s how ‘A Beautiful Mind’ came into being.”

However, Dr Chettiar’s life, while full of many accomplishments, spanned only a short 47 years. His life was marred by health conditions, including skin diseases, bone cancer, diabetes, and more. During his last days, Dr Chettiar was sent Rs 10,000 from a well wisher. When this person called Dr Chettiar’s personal assistant to inquire if the amount had been received, he was told, ‘Yes, it reached him. He used it to buy toys for children.’

Years of philanthropic work had burnt a hole in Dr Chettiar’s pocket, but his philosophy was that whoever approached him would never be turned away. So when a few women from Karaikudi approached him, saying that while he had built many institutions in the town, none were for women exclusively. It was then that Dr Chettiar sold his last remaining asset—his own home—to set up a college for them. He spent his remaining days in a cricket stadium.

“A few years ago, I got in touch with a person who had studied in the college my grandfather set up. She was an 85-year-old paediatrician in Boston. She said — ‘As women, we could not pursue any education. Our family wanted us to get married instead. But by opening the women’s college, Dr Chettiar changed our lives. He took so much care of us’,” Dr Vairavan says.