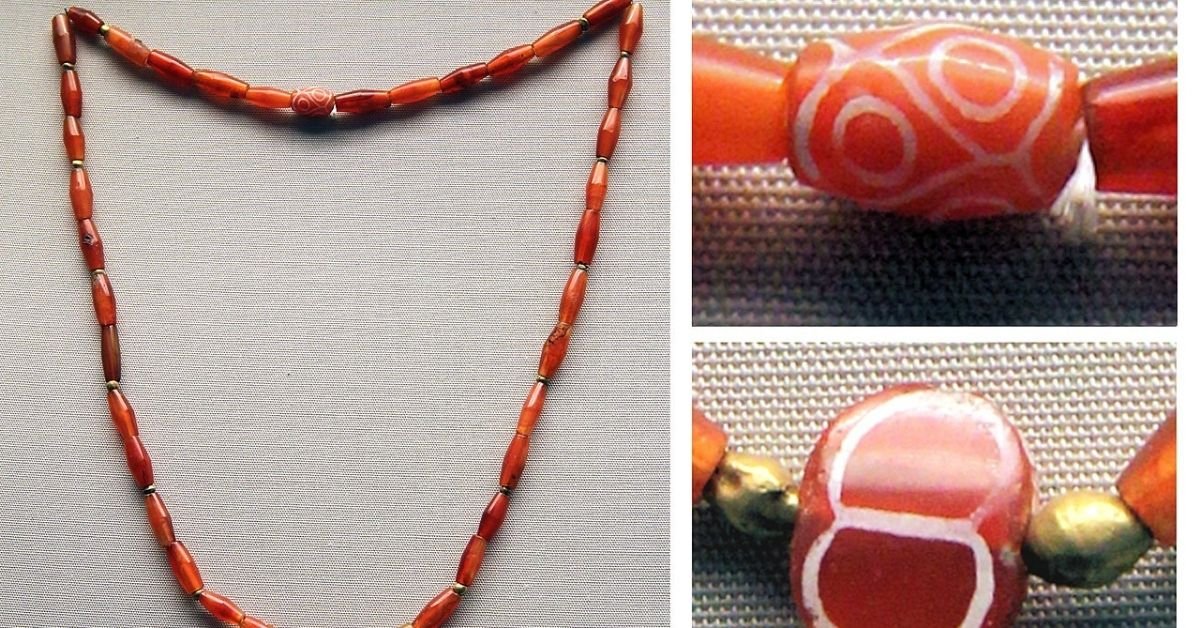 The carnelian bead industry in Khambhat exists even today and the town lives on to be one of the largest bead producing centres in the world.

Rare carnelian was a rather magnificent, chic and swanky stone — a style the uptown Harappans emanated. Mined from Ratanpur in Gujarat, they were made into beads using rigorous methods and were primarily traded and adorned as jewels by elites across civilisations over 4,500 years ago. Red or reddish-brown, the carnelian beads, at a later time, became a favourite in the Islamic world. They were made into Muslim rosaries and amulets, and exported in large quantities to Mecca where Indians bought them at exorbitant prices.

Locally known as akik, carnelian got its reddish-brown colour by heating chalcedony in the absence of oxygen in a kiln.

Almost 60 million years ago, a mass volcanic action, following the separation of India from the southern supercontinent of Gondwana, resulted in deep lava flows that are now known to us as the Deccan trap, which lies in West India. Superheated water containing dissolved chemical substances that dripped into the cavities got trapped in the lava. The water and gases cooled and the minerals in these cavities precipitated into solid, forming chalcedony – a pale grey stone.

Over millions of years, the softer rocks wore away leaving behind the comparatively harder chalcedony. Later, lumps of chalcedony were washed down the mountains and collected in hollow areas in wide valleys. This formation attains a considerable thickness around Ratanpura in Gujarat where they are concentrated in the form of conglomerates and gravels. The area boasts of about a hundred mining pits of such deposits located within a radius of 15 kilometres.

Dating back to 4000 BCE, the first evidence of carnelian beads come from Mehrgarh – an Early Harappan site in present-day Pakistan. However, it was the Harappans who majorly exploited the area around the Gulf of Khambhat for carnelian, worked them into beads and traded them from around 2600-1900 BCE. Lothal, a major Harappan site and port city, located 130 kilometres away from the hill mines at Ratanpur, was a lapidary centre.

The other bead manufacturing Harappan cities include Chanhudaro, Harappa and Mohenjodaro in Pakistan and Dholavira in Gujarat. Raw materials were shipped to these aforementioned cities, and from preliminary heating to the manufacturing of the bead — all stages of production were conducted at their respective centres that were controlled either by state institutions or merchants connected with political elites.

These beads were further embellished in various forms among which the most sought after were the ‘long barrel cylindrical beads’ and the ‘etched carnelian beads’. In addition to being aesthetic, these decorations speak volumes of the social hierarchy that prevailed then, the commendable technology used by them and the items of long-distance trade. The etched carnelian beads with designs of white and sometimes black were made using rigorous techniques and were highly valued. Such was its craze among Harappans that it spurred them on to make cheap imitation products, thereby generating a market for the same. Found in Mohenjodaro, the imitations were made of steatite or steatite paste.

The Production of Carnelian Beads

The Harappans transported long nodules of carnelian to their respective cities. The best among them were chosen and dried under the sun for months. They were further heated in ovens. Heating, in addition to making the stone easier to work on, deepened its red colour. The stone was then chipped out to a rough blank, and the shape was subsequently refined. They were then partially ground either on grooved sandstone or on quartzite grinding stones. Following this, the stones were drilled using a special cylindrical drill made of a rare metamorphic rock ‘Ernstite’, which was heated to make an extremely hard and durable tool. The drilling was perhaps done underwater or by dripping water continuously on the drill hole, considering the intense heat produced by the friction. Besides, even if the drill went slightly wrong the bead lost its value and was rejected.

The site of Chanhudaro has revealed a huge kiln that was used for the heating of stones.

An ethnographic study—conducted by a team of archaeologists on the present-day bead producing industry at Khambhat correlating it to the Harappan bead production centre of Chanhudaro—suggests that the process of bead production followed by the Harappans and the lapidaries today are much the same.

The study reveals that it may have taken the Harappans 24 hours or three eight-hour days of steady drilling to perforate a single six cm long bead. This connotes that a belt of 36 beads found at the Harappan site of Allahdino (Pakistan) may have taken over 480 days of work.

Of Kings And Royalty

These beads were traded far into Mesopotamia, Egypt and some archaeological sites in China, Greece, Tajikstan, and some South-East Asian Countries. In Mesopotamia, the carnelian beads from Harappan towns have not only been retrieved from archaeological sites and royal tombs but also finds mention in royal inscriptions. The inscriptions of Gudea (2144-2124 BCE) — a Mesopotamian ruler mentions a red stone that comes from Meluhha (referred to as the Indus Valley Civilisation by the Mesopotamians). Procured from various Mesopotamian sites, they were mostly finished products.

However, some unworked pieces were brought in and worked on by their artisans wherein they engraved cuneiform inscriptions (Mesopotamian script). King Shulgi (2094-2046 BCE) got two such beads engraved and dedicated them to a Goddess. However, the beads that were locally made were rough and small compared to the ones from Indus. In Egypt, they were adorned by men, women and children as necklaces, bracelets, girdles, anklets and hair braids.

These beads remained a valuable commodity for trade until the 17th century CE and have been mentioned in various historical documents. Herodotus (484-425 BCE), a Greek writer, highlights the popularity of carnelian and onyx among the Romans, which is said to have been brought by them from India for making finger rings. Pliny (23-79 CE), a Roman author, has recorded the presence of mines for semi-precious stones in Ratanpur and their admiration among the Babylonians who believed that these stones possessed medicinal properties. Periplus of the Erythraean Sea (a Roman guide to trade and navigation in the Indian Ocean) dating back to mid 1st century CE described a network of sea routes between Egypt and the Gujarati ports.

The fortune of the bead industry has always relied on the centres of foreign trade, and have risen and fallen with them. Bharuch, located barely 12 miles away from the mines, functioned as a major port city and a great centre of trade in cotton and semi-precious stones from the 1st until the 8th century CE when the Arabs started initiating raids.

With the Indian Muslims starting their Hajj to Mecca through the harbour of Khambhat, the town also served as a gateway to the pilgrimage from India. The Mecca Darwaza in Khambhat bears witness to it. Traders carried hoards of rosaries and amulets made of carnelian beads that were bought at a much higher price in Mecca by Indians themselves. Thought about as a shield that would protect its bearer from the ill effects of envy, witchcraft and enchantment, carnelian was deemed significant among the Muslims. Legends say Prophet Muhammad wore a silver ring embedded with a red carnelian bead that was engraved with ancient Arabic letters.

No later than the 17th century CE, the channels of the port of Khambhat silted up for large ships to dock, leading to its gradual decline. Besides, the rise of European companies such as Portuguese, Dutch and British resulted in the ubiquitous European supremacy of the sea. This followed the diversion of the maritime trade to places such as Goa, Diu and Surat. Besides, the construction of a railway in 1863 CE connecting Bombay to Ahmedabad blew a huge hole in the trade industry of Khambhat, sealing all sea and land trade that passed through it.

The carnelian bead industry in Khambhat exists even today and the town lives on to be one of the largest bead producing centres in the world. A roaring demand for carnelian in Africa between the 1940s to 1960s restored the bead making industry of Khambhat. Following this boom, the industry employed over 2,000 people in the 1990s and manufactured up to 20 million beads a year. The craftsmen, however, follow a similar technique as was pursued by the Harappans 4500 years ago.

“Today, there are seven steps involved in making a carnelian bead,” says Anwar Hussain, a fifth-generation bead craftsman in Khambhat. While one step is carried out by one person, Anwar is skilled enough to perform six steps while the final step of drilling is conducted by a friend. These beads are bought by merchants who further sell them off to jewellers. Carnelian makes a large part of the junk jewellery market today. While a one-inch bead from Anwar Hussain would cost you Rs 250, the long barrel cylindrical beads like the ones at Harappa are priced at around Rs 950.