Attacked For Being A Woman In Sports, Today This 18-YO Is A World Boxing Champion Arundhati Choudhary is a boxing champion from Kota, Rajasthan, and the first woman from the state to win a gold at the AIBA World Youth Boxing Championship in 2020.

IIn 2018, boxing champion Arundhati Choudhary (18) was basking in the glory of having bagged a gold medal at the Khelo India School Games, when a fateful incident suddenly threatened to uproot her career. While training in her hometown of Kota, Rajasthan, she was foul punched by an opponent multiple times. The head injury was so serious that Arundhati was hospitalised for a month. She says the incident was an act of vengeance, as a girl’s win did not sit well with a few local conservative boxers.

Arundhati picked her next battle wisely — instead of engaging in a fight with these naysayers, she decided to focus on the upcoming ASBC Youth Asian Men & Women Championship, held in Mongolia, and put an end to the regressive perceptions that surrounded her career.

For months, she underwent rigorous training under her coach, Ashok Goutam. Unperturbed by the occasional blackouts during these training sessions, she went on to prove her doubters wrong with her stellar performance in the championship, where she bagged a bronze medal. “Had I not been injured, I would have clinched gold,” she notes.

“Even in our supposedly equal society, those boys tried to impose their patriarchal views by trying to tell me that an Indian girl is incapable of making her name internationally. I was not going to let their insecurities and outright opposition dictate my dreams,” Arundhati says. This was not the first time that Arundhati had stood up for herself, and it certainly won’t be the last. She is quick-witted and known for her skilful and power-packed moves. The three-time Khelo India champion became the first female boxer from Rajasthan to win gold at the AIBA World Youth Boxing Championship in 2020.

Arundhati hails from a middle-class background. Having been born and brought up in the hub of IIT coaching, her joining the premier institution was almost predestined. But she had a different plan — to play basketball at the national level. Here’s how that dream eventually paved the way for a career in boxing.

Putting up a fight Arundhati describes herself as a restless child, and says she was always an active participant in outdoor games in her colony and school. She was taller than most girls her age, which landed her a spot in the school’s basketball team. She says winning games gave her a high, and she focussed on the sport more than her studies, eventually making team captain. She led her team at the state level and won several games.

While her parents were proud of her achievements, they had always pinned their hopes on her education, specifically in IIT.
Recalling a particular argument with her parents about playing sports professionally, Arundhati says things got so heated that it left her in tears.

“After much convincing, my father agreed, but asked me to choose a sport which can be played solo. That’s how boxing entered my life. If you don’t count the number of times I have punched boys in school or been involved in physical fights, I didn’t have any experience in boxing. When I finally took the decision, my relatives expressed their discomfort. They believed I won’t find a ‘good’ husband if I break my face while playing. Fortunately, my parents stood by me and that made a huge difference,” Arundhati recalls.

With help from her school, Arundhati managed to get a Wushu (a type of martial arts) coach. Even though Ashok had never dabbled in boxing, he came on board after seeing Arundhati’s determination.

“At 15, Arundhati had the drive and ability to learn new skills. The initial days are always the toughest, as the player’s body is adjusting to the new intense physical routine to develop core strength and stamina. For Arundhati, too, this was excruciating, given that our training began at 4.30 am every day. By 7 am, she would go to school, and come back for training in the evening. She did a good job balancing both boxing and studies,” says Ashok. The duo worked hard every day, and Ashok would watch boxing videos to learn the techniques and strategies of the sport. Their hard work paid off when Arundhati was selected for a national camp when she was in Class X. She remembers scoring first division despite studying only for 12 hours. For a long time, the boxing world has been a male bastion. It was only in 2012 that women’s boxing was officially recognised as an Olympic sport at the London Games. Closer home, world champion Mary Kom had become a household name. But she was miles away from Arundhati’s hometown, and there were no role models she could look up to in Rajasthan.

There was no real ring for fights or equipment for training. To Arundhati’s delightful surprise, her father Suresh spent money and arranged for the same. This is highly unusual, says Arundhati, given that fathers in her neighbourhood generally reserve the money for their daughter’s wedding.

Once Suresh saw his daughter’s potential, he went all out in supporting her dream — from buying the best quality almonds to support her mental stamina to making sure she participated in tournaments without worrying about anything else. 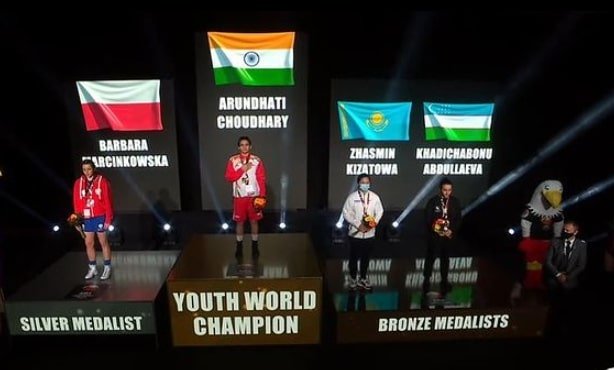 Likewise, her mother Sunita stepped away from traditional gender roles and normalised the fact her daughter was not obligated to learn household chores. In a community where something as simple as wearing shorts raises eyebrows, this mother proudly chose to be a feminist, just so her daughter could make India proud.

“My parents have had a huge role to play in social prejudices slowly dissipating from my life. I knock out my opponents in a game and my family does it in the real world,” adds Arundhati.