The Better India's very own staff member, Sanchari Pal, currently in West Bengal tending to her ailing father, narrates her quest for the much coveted Remdesivir drug to treat her ailing father and the events that transpired

On the night of 22 April, Sanchari Pal from Shimla plunged into a crisis that millions of Indians are struggling with today — to seek medical assistance to cure COVID-19. Her 69-year-old father, Rajendra Prasad Pal, who has diabetes and hypertension, was facing the threat of increasing complications. As his condition worsened with mild pneumonia, the doctors at the Kasturba Gandhi Hospital in Chitranjan, West Bengal, prescribed Remdesivir for treating COVID-19.

However, the drug is still in acute shortage across India.

Panicked, Sanchari reached out to friends, family and strangers via social media, mentioning the details of her father’s case to seek urgent aid. “The doctors asked to arrange for the drug and oxygen tank. I scrambled to reach all possible resources to procure Remdesivir, including the available helplines. I also put out a post mentioning my phone number for people to reach out but to no avail,” she tells The Better India.

Sanchari says that after being turned down by multiple sources, she found light at the end of the tunnel. By virtue of strangers over the internet, she started receiving calls who claimed to have stock of the drug.

But little did she know that it would turn out to be a scam.

‘He took advantage of my desperation’

“My hopes escalated. But I was doubtful as many suppliers demanded full advance payment. I did not want to take risks. However, one potential lead offered the Remdesivir at market price of Rs 24,000,” she says, adding a person claiming to be ‘Rahul’ from Kolkata shared pictures of the refrigerated drug and assured her four vials.

To double-check, she asked for more pictures and the details of how she would procure the medication from him. He said the drug could be received by Sanchari’s relative who was attending to her father. “As a precaution, I told Rahul that I would not make the full payment. He agreed to my request but asked me to make half the payment in advance. He seemed genuine and expressed concerns about my father’s health too. Rahul said he wants to help humanity and that he understood the pain and trauma people were undergoing in this crisis,” she adds.

Sanchari says that he even explained how Remdesivir requires storing under 4 degrees Celsius, and needed a flask to be transported. “He sent a picture on WhatsApp showing how the flask is being cooled to prepare for the three-hour journey from Kolkata to Chitranjan. He said the medicine would travel by Janshatabdi Express departing at 2 pm and promised to share the contact details of the train guard to whom he would hand over the medication,” she says. Sanchari then made a payment of Rs 12,000, but was left with a kernel of doubt.

“He asked me to make the payment to an account holder named Deepak Kumar. In my state of desperation and wanting to access the medicine for my ailing father, I did not give it a second thought fearing the loss of opportunity,” she says.

However, just minutes before the train could leave, Rahul stopped answering her calls, and eventually switched off his phone, never to respond again. 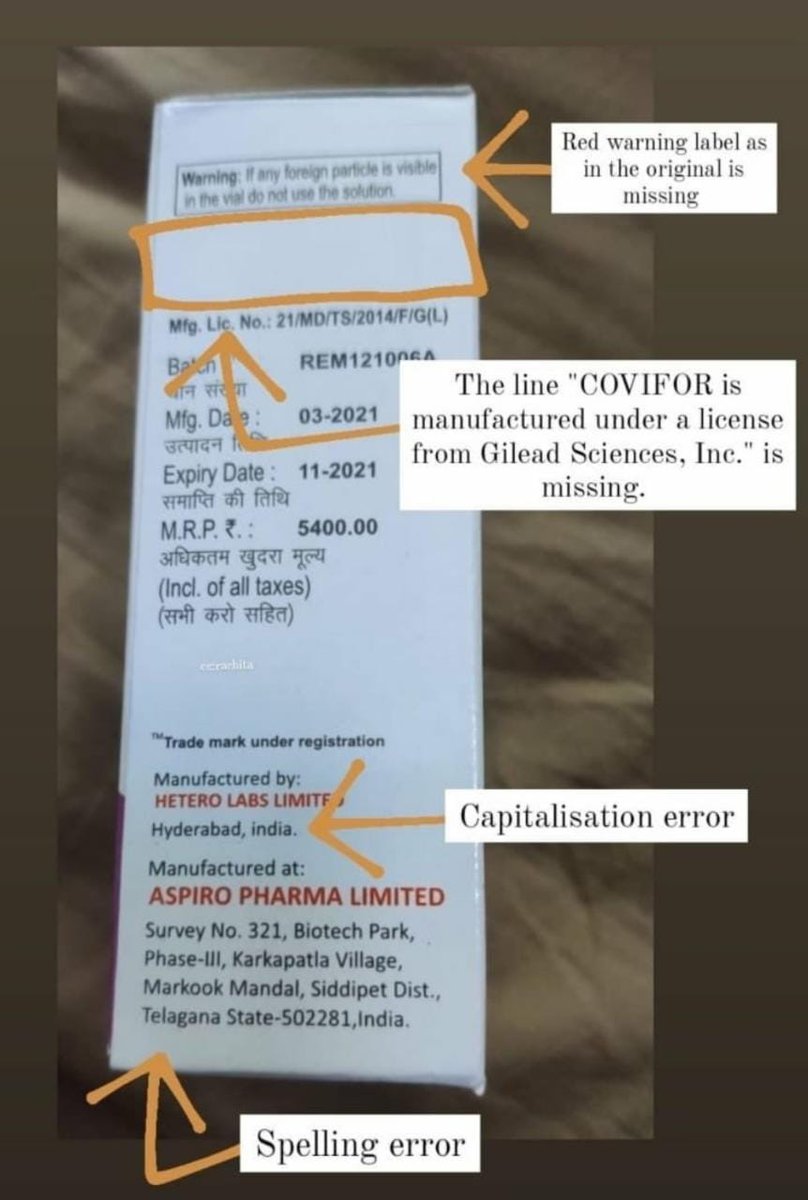 “It took only moments to realise that it was a scam and I was duped. Besides taking care of my father, I had to make a complaint to the cybercrime department with the concerned police department,” she shares.

Sanchari urges people to learn from her experience and fears there may be hundreds more falling for these scams. “Everything seemed genuine until the last minute, and the person took all the efforts to gain my trust. Only now do I realise he was luring me into making the payment,” she says.

Aside from being suspicious of unscrupulous people asking for huge amounts of money in return for essentials like the Remdesivir drug, there are some pointers one could keep in mind to ensure the authenticity of the vials.

Make sure that you ask for pictures of the vials of Remdesivir that the person is offering. Look carefully at the label and packaging.

For example, the pictures mentioned show the label does not have an ‘Rx’ symbol and has grammatical mistakes with alignment errors, too. Spelling mistakes like the name of the place of manufacturing or unnecessary capitalisation can help identify the fake drugs from the real ones and save you from being duped.