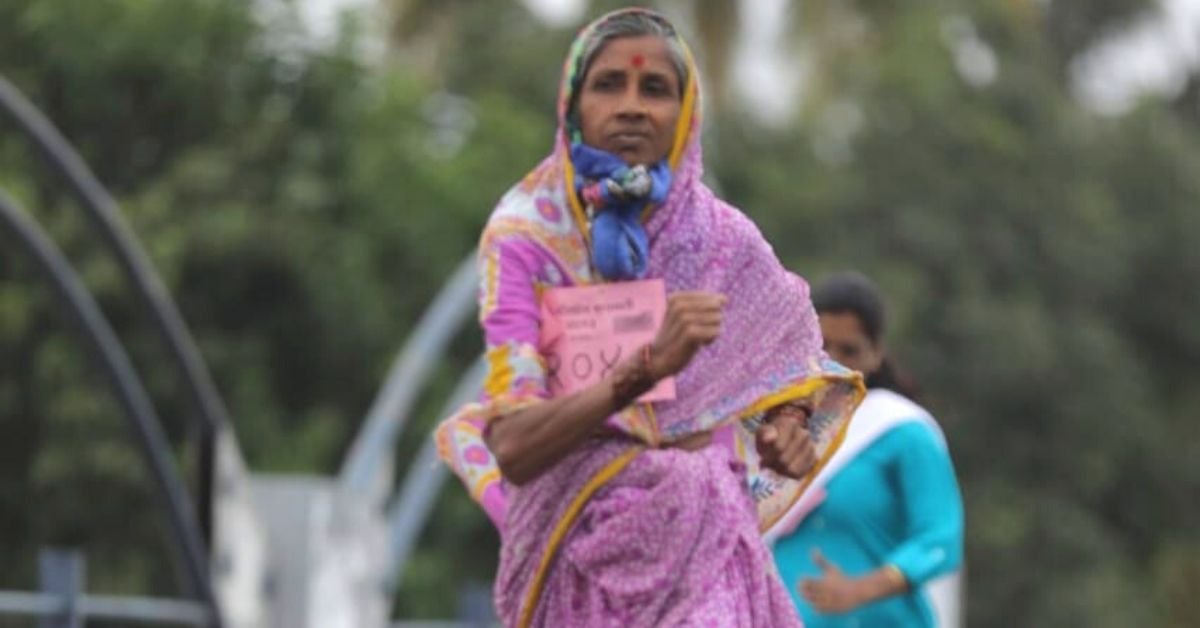 At 60, Lata Kare from Maharashtra ran her first marathon to win money to cover her husband’s medical expenses, and won. She went on to run and win two more. Her inspiring story was adapted into a movie, which received a special mention in the National Film Awards.

Lata Kare from Baramati, Maharashtra first made headlines in 2013 when she ran the first marathon of her life, barefoot and wearing a saree, at the age of 60. She ran neither for glory nor to fulfil any lost passion.

The marathon was her final shot at arranging Rs 5,000 — a sum needed to pay for an MRI scan for her husband’s cardiovascular problem. During the sprint, she stepped on pointy stones, burned her feet on the road, and her ankle-length navari saree obstructed free running. But it didn’t matter, for her only goal was to win the race under the senior citizen category.

And she did. As her chest touched the red ribbon, tears rolled down her cheeks, but she quickly gathered herself, proudly walked up the stage, and collected the prize money.

A few days later, doctors were able to identify the compromised areas of her husband’s heart and prescribed medicines to keep heart inflammation in control.

“Love can make you do things that you never thought possible,” Lata, now 68, tells The Better India. “Love helps you develop a can-do attitude, which makes you fearless and optimistic. Even if the world does not believe in you or mocks you, you know there is one person who will be your cheerleader no matter what. This is exactly how I would summarise my relationship with Bhagwan, my husband.” The feisty woman is a wife, and a mother of four.

Her exceptional journey was made into a Marathi movie, Lata Bhagwan Kare, and released in 2020. Directed by Karimnagar-based director Naveen Deshboina, the movie is one-of-a-kind, as Lata plays her own character, reliving her own story. In the recently announced National Film Awards, the movie bagged a place under the special mention category.

Naveen read about Lata in the media, and approached her for a film in 2017. “Lata ji, who I call ajji (grandmother), was very adamant about playing her own role, even after knowing she would have to run, lift weights and train for real. We included some shots of her falling or bruising her feet and she did them flawlessly. At her age, she learnt acting and never complained about having to give innumerable takes. She even fell sick due to the physical exertion, but her spirits never deteriorated,” Naveen tells The Better India.

A decade ago, Lata, a farm labourer and Bhagwan, a security guard, had just married off their third daughter. The wedding had drained their savings, and the couple decided against retirement. Their daily wages were just enough to survive, and so they were content. But in 2013, Bhagwan suffered a heart attack, and their lives were uprooted overnight. While he survived the episode, it left him with unbearable chest pain.

“The doctors asked for an MRI scan and a few other tests, which cost Rs 5,000. There was no way we could save that much money from only our meagre salaries. I shed my self-respect and begged neighbours, villagers and my employer for money, but received no help. Meanwhile, Bhagwan’s health deteriorated further, and the medication proved to be expensive as well. It felt like we had reached a dead-end, so I took up a second job at a school,” Lata recalls.

Here, she overheard a student talking about a senior citizen marathon and the winning amount. She got hold of a poster to know further details. With only a few days left before the event, Lata took help from a fellow villager to prepare.

While her body was not used to physical exercise, her determined mind found a way. Every day, she would run early in the morning, holding two buckets filled with water. She’d run uphill and on rocky terrains as well.

Finally, on the day, she turned up without any registration. Needless to say, the organisers didn’t allow her to participate at first, but when she revealed her reasons, they agreed.

Narrating what was going on inside her mind as she stood at the starting line with other participants, Lata says, “I was terrified when I saw others wearing swanky shoes and appropriate sprinting attire. I was in a saree with no footwear, and this was my first ever marathon. I was scared of falling in between and dying. Once the race began, everything else was a blur. All I saw was money that would save my husband.”

Thanks to the prize money that Lata won, Bhagwan could not only get the required tests done, but also purchase the expensive medicines. However, Lata knew this wouldn’t be the happy ending everyone had hoped for. His unpredictable health still meant that they needed money for operation and post-op care. Fortunately, by this time, Lata had become a known face in the state, after the regional media had written about her. Donations began pouring in from strangers, politicians and villagers.

“People were kind, and helped selflessly. I was pleasantly surprised. After that, we were invited to certain charities where they supported us financially. But I didn’t want to depend on others. So I ran and won two more marathons, in 2014 and 2016,” Lata says.

The husband-wife duo was also paid a hefty amount for the movie, which allowed them to finally retire. Today, Bhagwan is doing well, and is on lifelong medication. As for Lata, she finally feels unburdened, and is happy about the recognition her film has received.

“I am extremely proud of my wife, who literally went miles to save my life. I don’t think anyone is as strong-hearted, kind and gracious as her. She is the best partner I could have asked for,” Bhagwan says.