Exclusive: The Adorable Doctor Couple Making The Internet Swoon With Their Jugalbandi! Dr Sujata and Ashutosh Kelkar, an elderly couple from Jalgaon in Maharashtra, went viral for their rendition of Kya Yahi Pyaar Hai from Rocky (1981) on the harmonica.

Dr Sujata Kelkar hardly requires retakes when shooting for a harmonica performance. Her husband, Dr Ashutosh insists on several. The two are poles apart, and no recording is complete without their banter. But if there’s one thing that unites their marriage, it is their undying love for the mouth organ.

Their unflinching dedication and passion to play the instrument is probably how the doctor couple, based in Maharashtra’s Jalgaon district, became internet sensations two years ago. Their soulful rendition of Kya Yahi Pyaar Hai from Rocky (1981) has garnered thousands of views on Facebook.

Since then, there has been no stopping the duo. Through the lockdown, they frequently uploaded videos of themselves singing together, gaining more popularity and keeping the internet entertained.

All videos are shot on the phone by their domestic help. Stolen glances and hints of smiles during their performance make the couple’s mutual adoration abundantly clear. They are often joined by their 9-year-old dog, Xena, making it a picture perfect family.

Talking about what qualities they both bring in their relationship, Dr Ashutosh quips, “I bring madness in the marriage, but she balances it with her sanity and elegance. I bring notes of harmonica music, and she combines them with the perfect rhythm.” This Valentines Day, The Better India speaks to this unusual couple, living in the city of Bhusawal. Having been married for over 30 years, the Kelkars talk about reigniting lost passions, what got them onto social media, and how they still maintain the same curiosity as a newly married couple.

Dr Sujata (53) and Dr Ashutosh’s (59) union was not made in heaven, but arranged in the drawing room of the Kelkars. Like every arranged marriage back in the ‘80s, they too met only 3-4 times before their wedding day. Through their short-lived courtship period, they did everything they could to get to know each other — from standing in line for hours for a trunk call, to writing letters and making surprise visits to one another. While Dr Sujata is a gynaecologist, Dr Ashutosh is a general surgeon. They opened their nursing maternity home right after marriage, in 1989. They have two daughters, one of whom has taken after her parents and become a doctor. The other is in the business management.

“We dedicated the majority of our lives to building a career and raising two beautiful and self-reliant daughters. In the process, we ignored our interests and passions. I was a vocalist in college and he played the harmonica. Five years ago, Ashutosh had bypass surgery and that was our wakeup call. Since then, we have been actively supporting each other to pursue whatever we enjoy. We run for marathons, play table tennis, and perform in public, and do everything to make up for lost time,” says Dr Sujata.

In 2015, when Dr Ashutosh picked up the harmonica, it came handy as a stress buster. Watching him peacefully play the instrument persuaded Dr Sujata to purchase one for herself. They turned to YouTube and their friends to learn about synchronisation and rhythms, and joined the Indian Mouth Organ Players (IMOP) group on Facebook to clear doubts or questions.

“People in the group were supportive from the beginning. They would share their pieces and give constructive feedback, which certainly helped. Through them, we learnt about the World Harmonica Festival in Germany and participated in it in 2017. Although our performance on Hum Tum Ek Kamre Mein (Bobby, 1973) didn’t win, we were ecstatic about just participating,” says Dr Ashutosh The festival, along with a few duet performances at social gatherings, gave them the confidence to record the pieces and upload it on the IMOP group. They received overwhelming response, and their videos were widely shared. This positive feedback brought the couple to social media in their fifties.

“That’s the beauty of social media,” says Dr Sujata, “After a tiring day of delivering babies and tending to patients, coming home to heart-rendering comments is blissful. Some say we inspired them, some say we made their day, and some just congratulate us for not losing our interests. I love how music blurs boundaries and turns strangers into friends.”

All their songs are romantic ones, and each is dedicated to either their loved ones, or each other. Last year in February, they uploaded Akhon Hi Akhon Mein Ishara (C.I.D, 1956) on their wedding anniversary and wrote a beautiful caption expressing their love.

“Even though I have a million imperfections, you always made me perfect. Even though I have a thousand flaws, you have made me feel flawless. The harsh realities of everyday life, the bitterness of failures at work and regrets of the past are bearable just because I have a wife like you,” wrote Ashutosh.

Though neither is tech-savvy, the zeal and excitement to upload amateur videos is ever present in the couple. In fact, Dr Ashutosh is even learning how to edit videos on a software. To ensure high quality, they put in extra hard work during practices. After picking a song, they spend hours listening to every beat and taking notes. They practice for a minimum of 15 days before recording. In between, there is always chaos with regards to decibels, rhythm, beats, and so on. 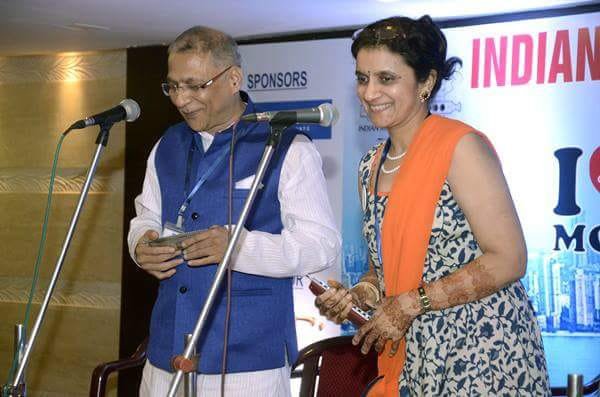 “I guess all the hard work is worth it when we see the outcome. It might just be an instrument for an outsider, but for us, it has been a thread that has intricately woven love in our fifties,” says Dr Sujata.

Dr Ashutosh and Dr Sujata’s story of finding companionship via harmonica is a beautiful testimony to the sort of love that blossoms by supporting and learning from each other. This kind of love withstands the test of time and space, and emerges stronger than ever.

Here’s a fun rapid-fire we played with the duo to celebrate love:

Who’s more likely to sing/perform for the other in public?
Dr A: Sujata.

Describe a dream music date?
Dr A: Playing together in the Himalayas.
Dr S: A live performance on the streets of Mumbai.

One thing you like and tolerate about each other?
Dr A: She is intelligent, kind and considerate. I tolerate her collection of sarees.
Dr S: He is honest and selfless. I tolerate his hyper-personality.

Who is more tech savvy?
Dr A: Neither.

If you gave up the harmonica, which instrument would you choose to play?
Dr A: Saxophone.
Dr S: Saxophone.

If not your partner, who would like to perform a duet with?
Dr A: No one.
Dr S: This question is invalid.