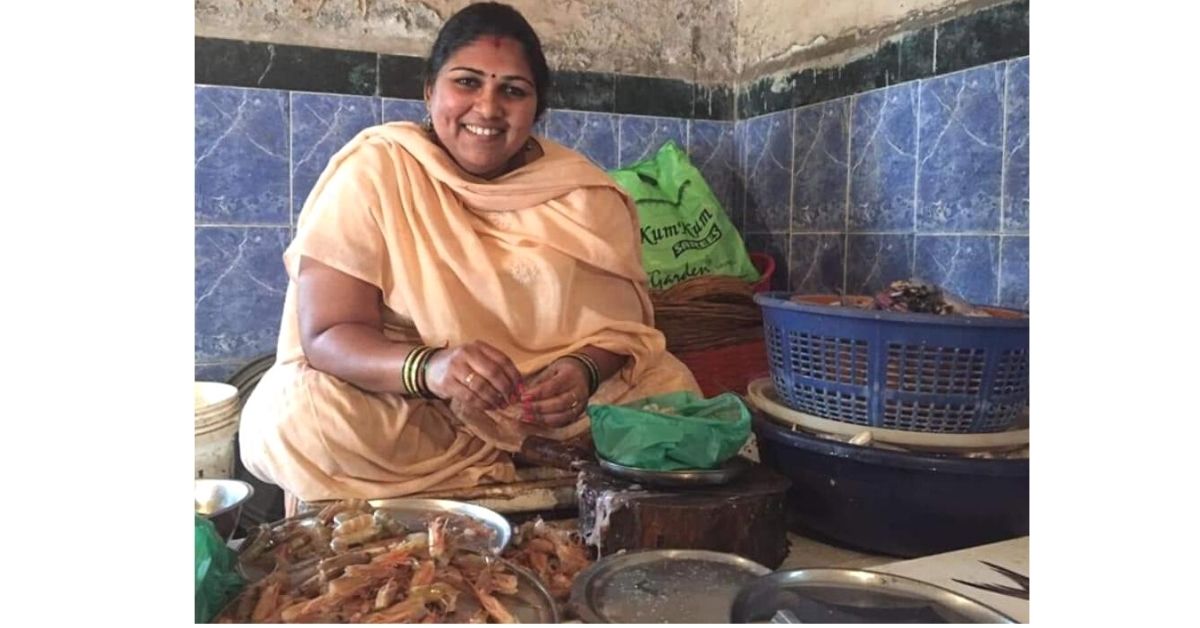 On World Fisheries Day, we bring you a story of a part-time fisherwoman who teaches prostitutes the practice of safe sex, while also fulfilling a few dreams of her own.

Sitting atop dirty, fishwater strewn counters, Reshma Tilo and her mother, Leela Ramesh Chinbaikar, sell their fresh catch on the weekends at the Bandra fish market in Mumbai. The duo have a selection of big and small fish – from prawns to kingfish, tuna and Indian salmon. And with a welcoming smile, Reshma, who has quite the gift of the gab, regales her haggling customers with stories from her past.

She tells this writer about how her dream of being a police inspector got cut short because she didn’t meet the minimum height requirement to join the force. Over the years, a lot of her plans didn’t quite work out in her favour, but little does this lady know of giving up.

“In 2009, I failed three papers while doing my TY (Third Year) Arts course and I am still trying to pass those today,” Reshma says.

But within a decade, the 34-year-old went from being a college dropout to working with Aditi – an NGO that works with female sex workers. On this day dedicated to fisherfolk around the world (November 21), we look at the life and times of one such fisherwoman who is emanating change – one prostitute at a time.

When Reshma was just a little girl, she had a life-altering experience that she vividly recalls. On the festival of Holi, Reshma and her friends were playing on the seashore. She found a used condom which she mistook for a water balloon. While her friends and family made fun of her and didn’t tell her what it was, she was determined to know what they were keeping from her.

“Today, I distribute condoms to prostitutes and teach them about safe sex. From Mahim to Kandivali, I work with our ‘peer educators’, who scout the roads to find women involved in flesh trade. As they build a relationship of trust with them, we counsel them and get them to register with our NGO,” says the Khar-resident.

Starting her career with Aditi as an outreach worker eight years ago, the fisherwoman proudly shares that today she has risen to the post of project manager. “A team of 21 women and one medical officer report to me. This line of work isn’t easy because you have to work with hookers on the street, those who dabble in prostitution in secret and also bar dancers. And no one will admit to being a prostitute. It requires a lot of patience and people skills,” Reshma, who one day hopes to earn her postgraduate certificate in Masters of Social Work, says.

Lockdown diaries by a fisherwoman

Like all other businesses that shut down due to the pandemic and the subsequent lockdown, sex workers also lost out on their meal ticket. “We collected food rations, clothes – for both women and children, sanitary napkins, among other essentials and donated them to the sex workers,” says Reshma, who adds that she dedicated this time to hone her communication skills.

While her own steady income dwindled during this period, as she lost her job cooking food in two households and selling fish at the market, Reshma says she was happy dedicating her time to help the sex workers and their children.

“There was a time when I would work three jobs – cooking food, selling fish and working at the NGO. But, my total monthly income would be less than Rs 15,000,” she shares and adds that her financial issues were a major reason for her incomplete studies.

“For a while, my husband, who works for a builder, wasn’t happy about my field of work. He didn’t like me spending so much time away from home. But now, looking at where my efforts have got me, he is very supportive,” Reshma says, adding that her monthly income has now doubled from when she was just a fisherwoman.

‘My son will fulfil my dream’

Helping her mother sell fish, Reshma says, is just “part of our culture”. “I have watched my mother struggle. She wakes up early, at around 4am, and travels all the way to Sassoon Docks, Colaba and Crawford Market areas to buy fresh catch and make her way back to the Bandra fish market. We also sell the fish occasionally caught by my brother and father,” she says.

And now, her nine-year-old son, Kanishk, says he wants to grow up to be a policeman. “He tells me he wants to complete my dream of working in the police force. Though he is only nine, he still talks about these things which warm my heart. If not the police department he says he wants to join the military. He is my only child but I’m proud that he is thinking of serving the nation at such a young age,” Reshma concludes.