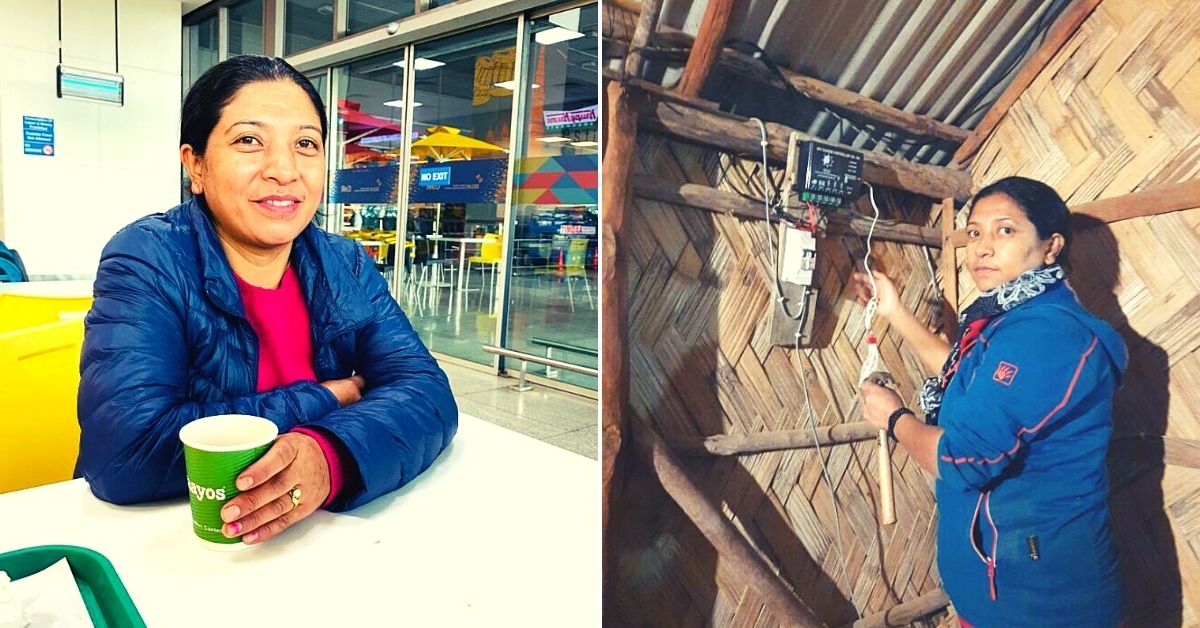 “Despite not finishing high school, Gurmet Angmo possesses incredible intellect and aptitude. For Ladakh, she can be a real asset.”

Gurmet Angmo was 11 years old when she first saw a light bulb on a trip to Leh. Living in the Ladakhi countryside, she recalls how their entire day centred around sunlight, which grew shorter during the winter months. After coming back from school, she would run back to help her parents on the farm. Once work on the farm was done, she rushed back home to finish her homework and help with cooking dinner before sunset.

Once it got dark, parents wouldn’t allow any of their children to step out because that’s when wild animals like snow leopards, Ibex, bharals and the Tibetan wolves would move around.

She remembers seeing that light bulb and thinking about the endless possibilities it presented for her remote village of Sumda Chenmo in the picturesque yet remote Markha Valley. Could fellow villagers now overcome the darkness that draws down on the village once the sun sets?

Thanks to that memory, 36-year-old Gurmet Angmo is today a solar engineer working with the Global Himalayan Expedition (GHE), “a for-profit enterprise dedicated to the development of remote Himalayan communities through sustainable tourism and technology.” Despite not finishing high school, she has been involved in electrifying over 50 villages in Ladakh and Meghalaya with solar power.

GHE is among the first organisations in the world to use tourism and technology to bring solar energy to remote communities. Founded by electrical engineer Paras Loomba in 2013, the for-profit entity conducts what they call ‘Impact Expeditions’ to remote Himalayan villages, for which they charge a ‘per-head’ fee.

They use “a portion of the expedition fee to fund the capital cost of the hardware, transportation, installation and training of village-scale solar micro-grids. The micro-grid infrastructure set up by GHE is owned and operated by the community,” according to United Nations Climate Change. It won the 2020 UN Global Climate Change Action Award.

Despite her intense love for science, accessing quality school education was difficult. Besides the poor state of school infrastructure, it was a struggle even getting a teacher who would teach there permanently. Once she finished primary school, Gurmet left her family behind and went to Leh in search for better education.

Unable to study past matriculation, her desire for an independent life saw her searching for a government job, a primary source of employment in Ladakh alongside tourism. However, there weren’t any jobs forthcoming.

“After a couple of years without work, I got married to Rinchen Namgyal, a carpenter. Soon after our marriage, we had our first child, and my focus soon shifted to taking care of my daughter. We had another daughter a couple of years later. However, things began to really change when my brother, Tsering Dorjay, who was working with GHE at the time, told me about the organisation in 2015. Understanding my desire for financial independence and love for science, he asked me whether I would be interested in attending a six-month solar engineering training course in Rajasthan. After speaking to my family, who encouraged me, I decided to take it up,” says Gurmet, speaking to The Better India.
In the following year, leaving behind both her daughters (3 and 10 years old at the time) with the family, she took off for a six-month training course at the Barefoot College in Tilonia, Rajasthan, which works in partnership with GHE.

“The initial three months were quite tough for me. It was difficult adjusting to spicy food and living with people from different parts of the world. There were doubts about whether I could even complete the course. However, my focus on work helped me overcome those concerns. It was easy when we worked on batteries and solar panels compared to assembling a circuit which requires close attention to detail. However, with the right concentration and effort, I learnt pretty quickly that as well,” says Gurmet.

She was trained to build, install, maintain, and repair solar electrification systems in off-grid villages, besides learning how to set up a ‘Rural Electronic Workshop’ (REW) to store components and equipment needed for the repair and maintenance of the solar units.

Upon her return to Ladakh after completing the six-month course, her first assignment was electrifying the Sumda Chun monastery. This was followed by electrifying the Lingshed village in October 2017.

Getting there involves a six-hour trek.

Their task was to electrify 97 households of the village in 10 days. Working with another colleague, however, Gurmet completed the task in nine days. Equipment for the same came from the Barefoot College, which she made during her training course there.

“Before installing a solar set, we consult the household asking them about their energy requirements, the number of bulbs in their homes, etc. Once those elements are discussed, we begin work on the battery. We fix the charge controller and then connect the battery. We then connect them with the panel on the roof, following which we fix the wiring. Meanwhile, the panel gets charged. Then we install the wiring in whatever rooms that need to be electrified. When the panel gets charged, we test the functionality of the newly installed system,” says Gurmet, briefly describing the process of installing a solar set.

Besides electrifying villages working in partnership with GHE, she has also been hired by the government as part of schemes like Saubhagya launched in 2017. As part of this Central government scheme to provide electricity to all households, the local power development department (PDD) were looking for solar electricians like Gurmet who could install solar systems in remote villages. “Her experience and training not only helped her earn money through GHE but also through government-sanctioned projects,” says Paras.

Last year, Chief Minister Conrad Sangma of Meghalaya, asked GHE to electrify a few villages in the state after reading up on their work in Ladakh.

“We went to villages in the South Garo Hills, and that was a game-changer. Initially, Gurmet was hesitant about travelling so far away from home. So, we got our head engineer from Chuchot, Shakir Hussain, along with a few of our colleagues, to travel with her. We electrified about four villages there, and Gurmet even trained a few women there,” recalls Paras.

“The trip was quite an adventure for me. Everything — from the landscape and the climate to the language and food — was completely unfamiliar. But I realised soon enough that all villages in India have at least one thing in common: People are full of gratitude and warmth for visitors. So I felt right at home in a place I had never visited before. Here too, the women were surprised and happy to see another woman install solar microgrids to light up the lives of entire communities,” writes Gurmet for the Voices of Rural India publication.

Meanwhile, she tells The Better India about how she inspired women there to take up similar initiatives. “There was a girl who could speak broken Hindi, who wanted to know how I did my work. I guided young girls like here through the process. In fact, another girl who accompanied me during the trip later went for training to Rajasthan,” she recalls.

In total, they electrified about 80 households over the course of 10-15 days. There were plans of going to Nepal this year, but the pandemic halted their plans. 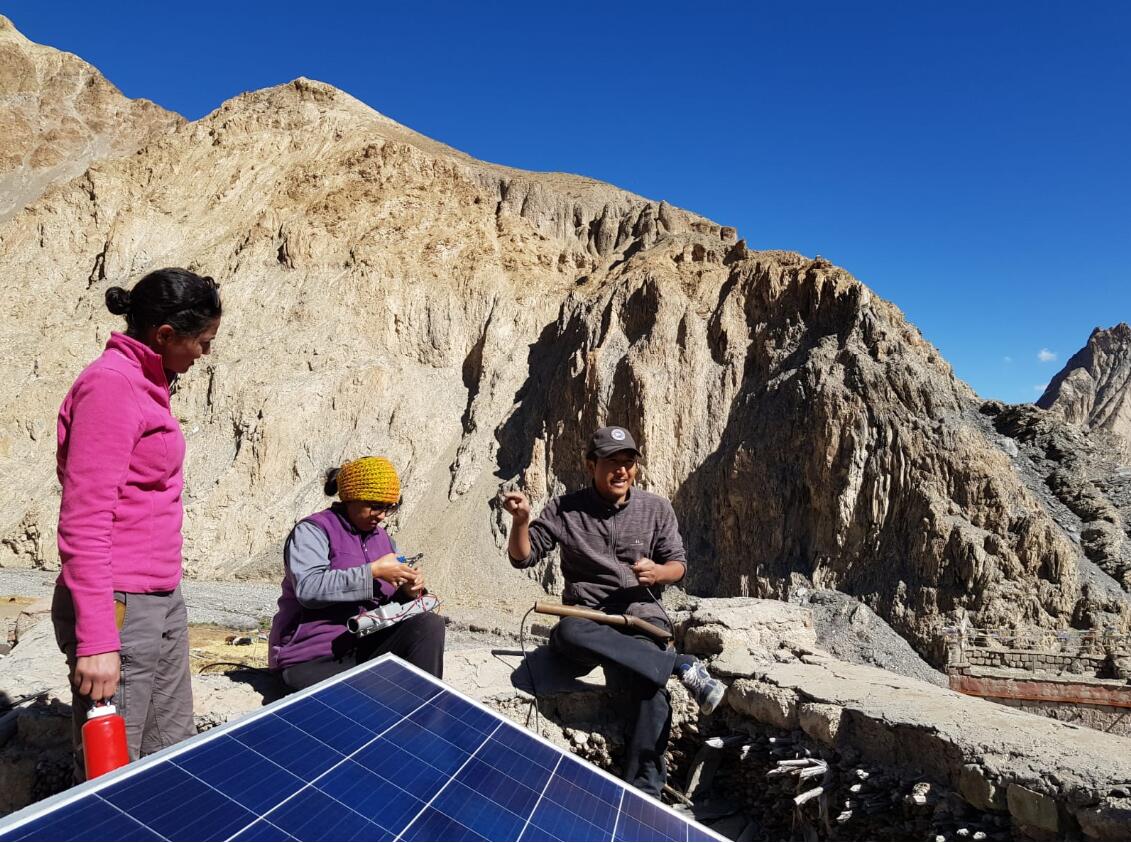 When asked about how solar engineers working with GHE are remunerated, Paras is at pains to emphasise that they don’t share an employer-employee relationship.

“The idea is to empower locals to become entrepreneurs. Whenever there is an expedition, we pay her daily. Depending on whether it’s 14 or 20 days, we pay solar engineers like Gurmet above Rs 2,000 per day. In one tourist season, she earns anywhere between Rs 30,000-Rs 40,000 per month. Each season lasts about five to six months. During the offseason, we ask Gurmet to help us maintain solar units in these villages. For maintenance work, we pay her anywhere between Rs 1500 to Rs 2000 per day,” he says.

That money for maintenance comes from GHE and the villages they have electrified.

“Every village we electrify holds a joint account, where residents pool in their money to maintain their solar units. Eight months back, Gurmet went to a remote village near Pangong lake, where she electrified 35 households. She was also able to sell 10 LED light bulbs there as well. In places outside Ladakh, like Meghalaya, where we are planning to retake her this coming January, she is paid Rs 3,000 per day,” Paras goes on to add.

Thanks to the income Gurmet has earned over the years; she has been able to open a stationery shop-cum service centre for solar lights in Saboo village.

“GHE has paid me well. We had to construct a house and build this shop, and the money I earned from these projects helped me pay for them. This has also left me feeling self-sufficient. They pay me based on the number of the days I work,” she says.

Throughout this entire journey, she credits her husband Rinchen Namgyal, for his unflinching support. “When I work, he sends the children to school, cooks and takes care of the shop. I am grateful to him for his relentless support. He says ‘my priority is your happiness and I am here to support and take care of you. So, do what you like doing the best. If it’s hard, then don’t do it.’ He is a simple yet very thoughtful man,” she says.

Gurmet’s message to other women struggling with the formal education system and unable to find work, but willing to make something of their lives, is simple. “Don’t just rely on education. Government jobs are limited, and you must do something on your own. And if you have a burning desire to do something, you can do it. There’s nothing impossible if we just dare to do it. We just need to take that first step,” she says.

Meanwhile, she also has plans of converting her home into one run entirely by solar power.

“Despite her lack of formal education, her intellect and aptitude are incredible. Given the opportunity and the right ecosystem, small entrepreneurs like her can really thrive. She has incredible self-belief and a sincere sense of how to conduct business. For Ladakh, she can be a real asset training other women who don’t have access to quality formal education, but want to make something of themselves,” says Paras.

(With valuable inputs from Namgail Angmo)