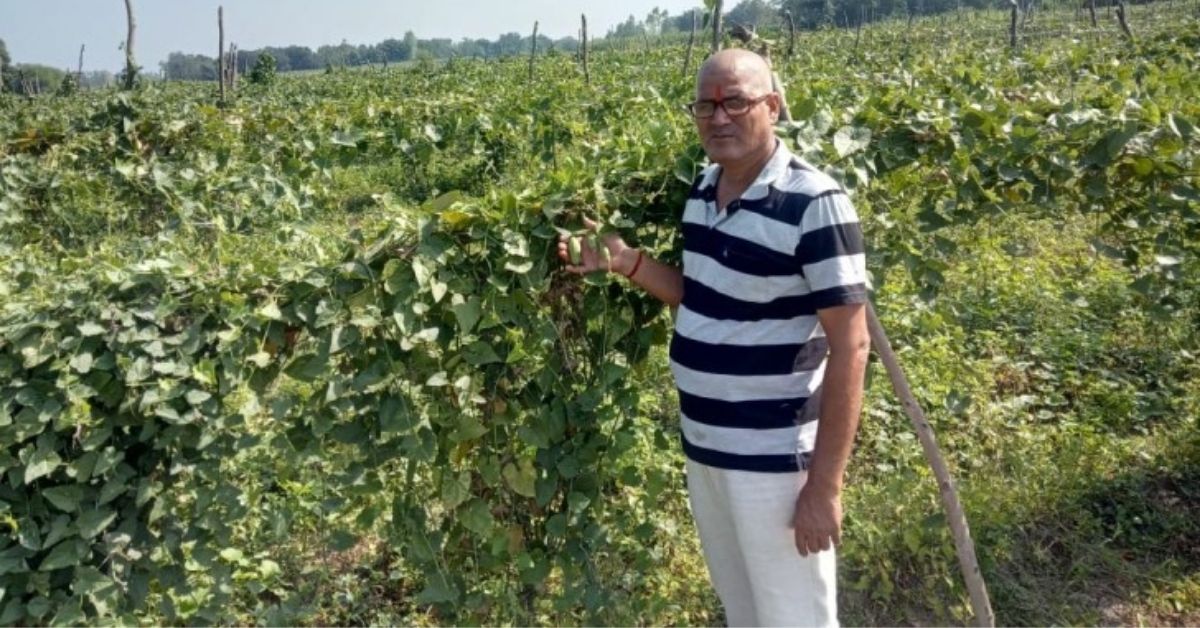 Chandranath Pandey poses in front of his sponge gourd farm

A 51-year-old electrical engineer from Sultanpur, Uttar Pradesh, uses banana farming to give his earnings a boost.

Chandranath Pandey, a 51-year-old resident of Baldirai village of Sultanpur district, Uttar Pradesh, was hoping to find a “high-paying job in a big city” to fulfil his dream of living a better life. While he did not get a job in the city, he still managed to achieve his dream through farming.

After earning his diploma in electrical engineering from Government Polytechnic Faizabad in 1988, he worked as an electrical engineer in a government office in Sultanpur, where he earned Rs 4500 monthly. Unhappy with his job and unsure of the scope of his career, he began working as a contractor in his village. Simultaneously, he also began farming his own land.

“As a contractor, I could not increase my earnings by much. I wanted to earn more to give my children a better education and a better life for my family. I also wanted to do something unique with my farmland and not just grow crops that are necessary at home like rice, wheat and veggies. I wanted to make it a profitable business,” says Chandranath, who has dabbled in farming for almost three decades now.

By growing sugarcane, Chandranath was earning a profit of less than Rs 1 lakh, which wasn’t worth “the time taken” or his efforts. So, he strived to find something unique, more profitable and low-risk and eventually stopped growing sugarcane in 2018.

About five years ago, Chandranath heard of Ram Saran Verma, who won the Jagjivan Ram Kisan Puruskar award for cropping varieties of banana in his farmland in Barabanki. He also won about 20 awards at district, state and national levels. Inspired by his success, Chandranath went to meet Ram to learn how to grow bananas efficiently and earn a profit.

After noting down the tricks of the trade from Ram, Chandranath began harvesting bananas in a quarter-acre plot of farmland. By the 14th month, the fruit was ripe for the picking and Chandranath yielded a profit of nearly Rs 4 lakh for the first time. Since then, he has been dedicating a quarter acre of land to grow bananas.

Tips and tricks on banana farming

Chandranath reveals that banana farming is low-risk as every season is suitable for the banana plants. He says that even heavy rain can’t affect the crop. “It also doesn’t demand much care as compared to sugarcane or any other crop,” he adds.

He further adds that farmers must be careful while buying compost fertilizer. He says that instead of believing medicine and fertilizer sellers blindly, farmers should consult experts before making such purchases.

He also suggests that farmers grow different crops in one place – a phenomenon called crop-rotation. For example, if a particular piece of land is used for growing bananas in one year, then it should be used for other crops in the following year. This technique helps to yield better crops.

“From farming alone, I earn more than Rs 12 lakh a year. My day job earns me just Rs 11,000 a month,” says an assertive Chandranath, who adds that now he has farm labourers to help him with his harvest.

He adds, “Farming is a very profitable business. Those who have farmland but are facing a financial crunch should opt for a farmer’s loan and then work hard to become successful. It’s just a matter of striving to farm in more efficient ways.”

Chandranath also grows crops like tomatoes, tarui (sponge gourd) and other vegetables along with bananas. From his tomato produce, he earned nearly Rs 2 lakh as a profit. He also yields watermelon from a quarter-acre, which he reveals is ready to sell in just three months. “Growing watermelon is also profitable as it is harvested in three months and will earn you more than Rs 2 lakh in a quarter-acre farmland,” he shares.

“Although I wanted to fulfil my dream while securing a well-paying job in a big city, I am doing it in my homeland. Now I have everything that I have ever dreamed of,” says Chandranath, adding that he bought three acres of farmland through the profits he has been earning from farming for the past five years.

Chandranath has two sons — one is a software engineer and working with HCL (Hindustan Computers Limited), Pune, while the other is working as a junior engineer in a government department in Sultanpur district. “I am happy with both my sons, who are now financially independent. My dream of seeing my children happy in life is fulfilled,” he says.

After improving his earnings through farming, Chandranath now tries to help farmers with tips and tricks of optimising farming techniques. “I want Sultanpur district to be the hub for all the crops like bananas, cauliflowers, tomatoes, green peas and lauki (pumpkin). Farmers in Sultanpur should supply various vegetables and fruits to other parts of India,” he says.