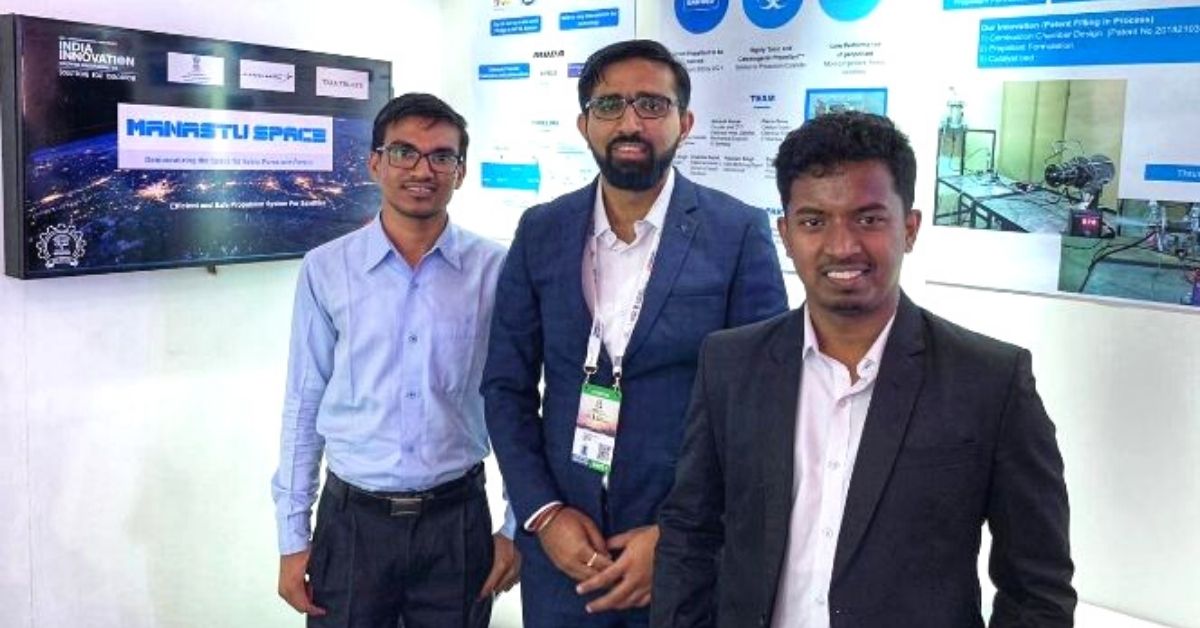 India is one of a few countries known to make successful, cost-effective space launches. The Mangalyaan Mars orbiter and Chandrayaan-2 are the best displays of this feat. India has also made a record of launching the largest number of satellites in one go 2017 – 104 of them.

However, launching a satellite and its payload costs almost the same as its manufacturing expenses. Moreover, the fuel used in these satellites, that allows manoeuvring in space, is toxic and hazardous to human health.

A Mumbai-based space startup, Manastu Space Technologies Pvt Ltd, is trying to solve these two major problems in this field with three innovations. The startup claims to bring down the toxicity levels by up to 40 times and make it 25 per cent more efficient.

“Like any vehicle, a satellite consists of fuel, an engine to burn it and a catalyst that functions like a spark plug to ignite the fuel. We have innovated on all the three levels,” says Tushar Jadhav, IIT alumni, ex-Defence Research and Development Organisation (DRDO) and co-founder of the startup.

About 40 per cent of the weight in a satellite comprises the fuel, and the remaining is occupied by the payload, which mainly includes instruments to carry out experiments.

“At present, hydrazine is the fuel used in satellites which are highly toxic. Its toxicity levels are equivalent to potassium cyanide, a life-threatening and carcinogenic chemical. We are using hydrogen peroxide and additives to reduce the toxicity to the level of common salt,” Tushar says.

“Every material has its own toxicity levels. If consumed in excess, it becomes life-threatening. Many scientists have to work in hazardous and high-risk environments. As the fuel is filled in these satellites, all other work is put on hold and the exercise is conducted in isolation,” says Ashtesh Kumar, an ex-IITian co-founder, specialising in combustion and propulsion.

Ashtesh says the new fuel will pose fewer risks to scientists. He explains, “The second major problem with hydrazine fuel is that it is less efficient. The newly developed fuel is 25 per cent more efficient, similar to what mileage is for a vehicle on earth. As 25 per cent of less fuel will be required the cost to launch the weight per kg will reduce, making it much more effective.” The safer handling of fuel also means reducing the operational costs to 60 per cent.

The combined benefits of the reduced cost on fuel and its high efficiency, they claim, make the overall costs 30 per cent cheaper.

Ashtesh says with less toxicity and more fuel efficiency, they achieved the perfect blend to make space vehicles cost-effective. The duo running a company of 20 employees have now developed a new engine and catalyst.

“A new fuel requires a different engine to burn it. It is the same as having different engines to burn diesel and petrol. So a new engine had to be developed. We also conceived a catalyst to ignite the fuel in the engine chamber,” Ashtesh says.

The I-Booster’s engine built by Manastu produces a thrust of 1 and 10 Newton. At present, India uses catalysts made by other countries. “It is one of the crucial parts in the engine without which it cannot function,” Ashtesh adds.

How it came together

Tushar and Ashtesh studied engineering together at IIT-Bombay for two years. “We worked together on launching a 10 kg satellite, Pratham for Indian Space Research Organisation (ISRO) in 2016,” says Tushar, who was a project manager to build the satellite.

Tushar says he joined DRDO in 2014 and quit after two years. “We both started the company wanting to solve the existing problems in the space industry,” he adds.

The co-founder of the startup says that both of them planned to work in the rocket launch system sector. “However, consulting scientists at ISRO and IIT Bombay, we realised the issues with fuel. We were told that solving small but important problems would help ISRO on a large scale,” he adds.

Tushar says the duo also had few ideas to work around the engine and started working out the solution.

However, a startup like this would need huge investors who were not confident to come on board.

With no strong financial backing from their family, the founding members of the company relied on existing expertise from IIT-Bombay and worked there as part-time researchers to use their facilities.

“We saved our earnings and worked slowly for a year and a half. It was only in mid-2018 that USA’s Lockheed Martin sponsored us with a Rs 25 lakh grant, which gave them a boost,” Tushar adds.

The startup then participated in various competitions like the S-Booster in Japan and won prize money to remain afloat. The Government of India also awarded them grants at national level competitions.

Manastu is now incubated by Royal Dutch Shell in Bengaluru to support their fuel needs, research labs and other requirements.

“Along with working with ISRO, we also bagged a contract with DRDO this year to work on an Indian military satellite,” Ashtesh says.

Poor finances apart, the startup also struggled to find expertise in a niche field of space technology. “No one had built the catalyst system, or was working around a new fuel that needed the right kind of expertise. For this, we are glad to have received support from IIT-Bombay at all times,” Ashtesh says.

Tushar says the startup is hoping to see their technology getting used at ISRO or DRDO in the next couple of years. “Not much can be disclosed right now due to confidentiality agreements but we are looking for something promising soon,” he concludes.