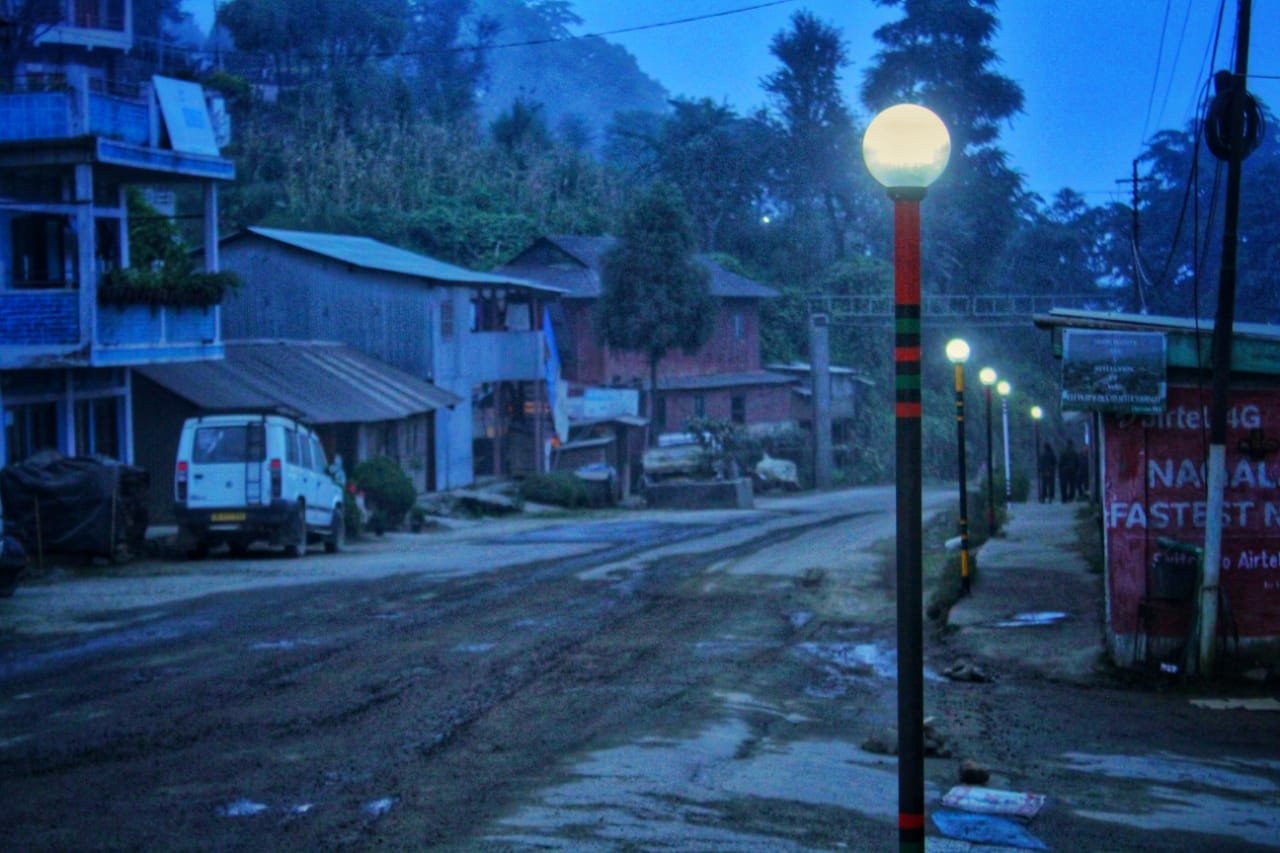 Khuzama village in Nagaland is a little greener and more sustainable thanks to the efforts of its students who set up a mini hydropower plant.

Through the heart of Khuzama village in Kohima district, Nagaland, runs the Asian Highway 2, which has street lamps that stand 7-foot tall. Its posts are painted with the motifs of the Angami tribe in colours of red, green, black, white, yellow and orange, among others. This was done to represent the “rich Angami tribe culture” that the village belongs to.

“There are 16 clans of Nagaland, and each has a unique language. So, we don’t understand one another,” laughs Keseto Thakro, a native of the village. But the lamps are a significant milestone for the Khuzama village for more reasons than one.

As the Coronavirus pandemic caused the world to go into lockdown, Keseto, who works as a technician in the mechanical department of NIT Chumukedima, returned to the village. Being a member of the Khuzama Students’ Care Union (KSCU), he began voluntarily teaching e-learning classes, as the schools were closed.

While one class was underway, Keseto chanced upon a unique idea. “The thought of installing a hydroger, a mini-hydro generator, struck me. I shared the idea with the Union, and everyone agreed. That’s why we came up with Project Brighter Khuzama,” he tells The Better India, adding how the students’ initiative assembled the plant and hydro-powered the village in two months.

“The sole purpose of the project is not only to produce electricity and benefit from it but to educate the students and the community about green energy,” says the 31-year-old. Feeding two birds with one seed, Keseto adds, “To keep the machine running we now protect the forest, where our water source lies. And the students also learned the basic working principles of a hydroelectric power plant.”

Having worked as a technician for six years with hydroelectric power plants, Keseto arranged for a run-down hydroger through his sources. In June, the KSCU acquired the machine, repaired it and assembled it in roughly a day.

“In the beginning, we didn’t have any funds, so we thought of using the hydroger to power just one street lamp near an accident-prone area,” Keseto says.

Under Keseto’s supervision, the students set up the plant under a bridge over the Mewoboke River and installed a lamp on the bridge. The students recorded a video of the setup and posted it to WhatsApp groups, appealing for further help. Funds began pouring in after that.

The project, which would usually take three weeks to complete, took two months as KSCU had to wait for an influx of funds. “Project Brighter Khuzama is wholly funded by like-minded locals and not by any governmental organisations. We raised about Rs 85,000, and the total expenditure came up to Rs 80,000,” informs Keseto.

A local newspaper that covered this story stated that 90% of the population, who are farmers, depend on the Mewoboke River as their main source of irrigation.

“As most of the villagers depend on agriculture, we thought of installing the first street light there. The second street light was installed at the village’s sub-health centre, that sees many late-night emergencies and deliveries,” Keseto says.

Keseto goes on to share, “The machine’s capacity is 3 kilowatts, but at present, we are generating around 550 watts, which is enough to light up 23 street lamps (7-foot tall), that light up the footpath and eight street lights (20-foot tall) that covers around a 300-meter-stretch of the highway.”

“The boys did most of the heavy lifting and manual labour, but the ladies also helped a lot,” says Nophrenu Thapru, who completed her Master’s in English Literature last year and now serves as the general secretary in the KSCU.

“One of my friends came up with the idea to paint the lamp posts in the traditional colours of the Angami tribe. She also painted a few herself,” the 26-year-old adds.

As the work on the hydroger went on from dawn till dusk, Nophrenu says, “The other ladies and I prepared toast and tea for the boys, along with Galho, a porridge-like dish of the Angamis that includes vegetables and rice.”

Elaborating on the students’ union, its educational and statistical secretary, Sedi Thakro, says, “The union was founded in 1963, and 23 members are elected for a tenure of two years.” He adds, “Like all other unions, it is a village-level organisation that looks into the welfare of the students. ‘Project Brighter Khuzama’ is also a first-of-its-kind initiative by a student body in our state.”

The time and energy of these students that was poured into making the Khuzama village a little more sustainable and brighter will hopefully be appreciated by many more generations to come. Keseto says, “Project Brighter Khuzama was a success because of the cooperation and contribution of every single individual of the team.”