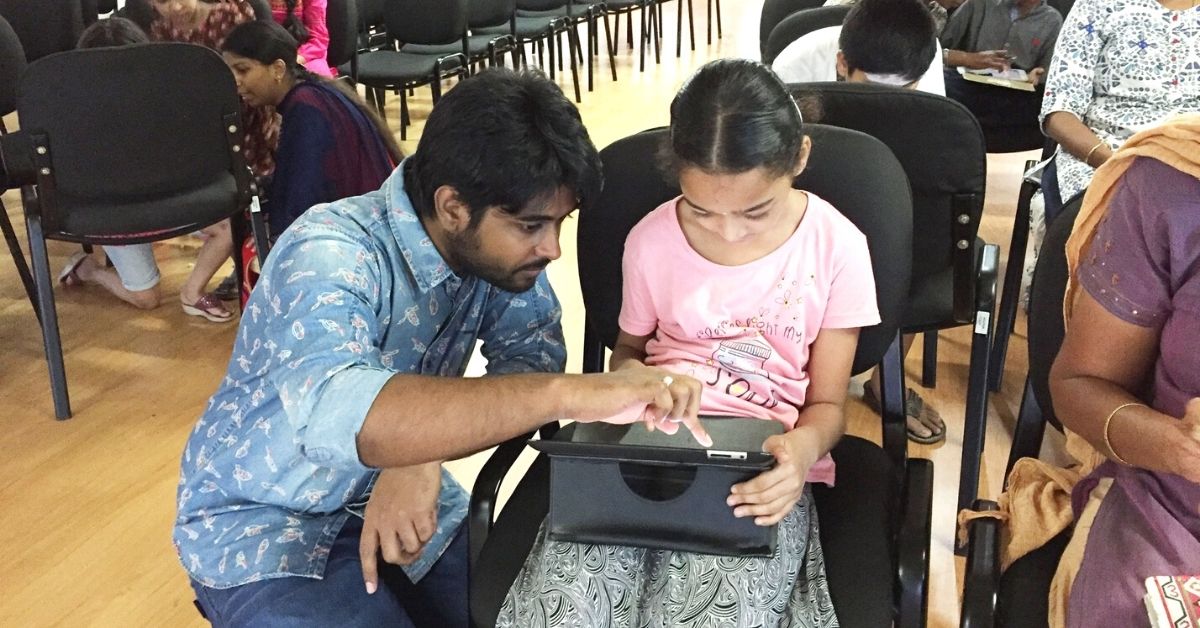 In 2019, Manu Sekar received a unique request from a client to teach her autistic daughter computer programming and coding. The 31-year-old Chennai-resident, who is a graduate in mobile application development and branding, admits he was unprepared for the challenge.

Manu worked to develop mobile apps, along with breaking barriers for social workers and marginalised women by teaching them computer programming. He also helped senior citizens use smartphones and gadgets. “I believe that anyone can do computer coding. I knew what autism was but I did not work in the area of special education,” says Manu.

A year later, he now teaches 35 specially-abled students with down syndrome, autism, dyslexia and speech or hearing impairment.

“People with special needs cannot make it to professional education or mainstream workforce. I realised that there is no sustainable or alternate career option for them. They do not require charity or funds from CSR for temporary activities or even sympathy,” Manu says, adding, “Everyone has hidden potential and technology can break so many barriers. You just need a computer and an internet connection.”

Need of neuro-diversity through coding

Manu’s journey began with the understanding that people with different cognitive abilities need to be brought into the mainstream. “We speak about gender equality and other progressive issues in society, but there is a need to address neuro-diversity. People with special needs, should not be seen as different but accepted as they are,” he tells The Better India.

With a motive to address the issue and bring change in the IT sector, Manu started HashHackCode in April 2019. The startup caters to specially-abled children between the age groups of 8 and 45, with different cognitive abilities, by teaching them computer programming. Starting with basics to prepare animated posters, greeting cards and other simple logics, the centre helps the students learn complex languages like HTML, Javascript and others required for website creation.

From an initial group of four students, Manu now has a few students from abroad as well. The cost of teaching varies from Rs 8,500 to Rs 40,000 for ten sessions, depending on the requirement and course pursued by the students.

Empathy and patience is the key

“Programming is very predictable. One needs to understand the logic and the sequence to approach it. Everyone has the potential to do coding, the way of understanding the logic in each individual is different,” Manu says.

He admits that people with special needs require more patience and empathy for the same. “The qualities are absent, and we provide 1:1 teaching methods for these students. Students with special needs have varying understanding capacities, and the time required for each student to progress also varies,” he adds.

Manu says the main challenge does not come from teaching complex codes, but understanding the way each student learns and developing teaching mechanisms around it. “There is no rote learning of definitions or conventional learning methods. We focus on experiential learning,” Manu says.

The other part of learning comes from a co-worker, co-learner system. Along with the students, Manu also teaches computer coding to the parents. “Many parents have given up their careers and well-paying jobs to attend to the needs of their children. They have sacrificed their lives. Learning to code, helps them support their child to learn and also provides an opportunity to start the second innings in their careers,” Manu tells The Better India.

Manu feels that sometimes even parents are amazed to realise the potential in their child.

Maria Priya, a single parent of a 17-year-old with down syndrome, does not believe the tasks her son is doing these days. “I was sceptical when I came to know about it. But after attending some sessions and meetings of parents, I was convinced to give it a try,” she says.

Maria thought it would be good for her son, Alan, to remain engaged during the one-year academic gap he took after completing Class X. “The classes went well and his learnings improved as the personal attention given to each student helped to gain his confidence,” she adds.

However, she admits that she became reluctant once again as the lockdown due to COVID-19 took the classes online. “But after giving it a month of thought, I enrolled Alan again. Initially, it required for me to sit and arrange the classes and help with completing tasks, but now he has become entirely independent,” Maria says.

She further says her son has become more conscious about the science of coding. “There are positive changes like Alan’s understanding of design has improved. He knows what sequence of programmes to follow and the syntax of programming. Understanding of animation design and assessment of its treatment is done by him, which is a commendable achievement,” she adds

The founder of the startup says that by teaching the students, he wants to build a community, allowing them to become independent.

“The programme enables neuro-diverse individuals to work on mini-tasks with companies for a short duration, between 2 to 12 weeks, where they can get hands-on experience of working as an inclusive employer with companies,” Manu says, and adds, “Unlocking the hidden potential in such individuals could help create larger impacts to create an inclusive society.”