“How I Got a Man Arrested for Flashing at Me”: Bengaluru Woman Shares 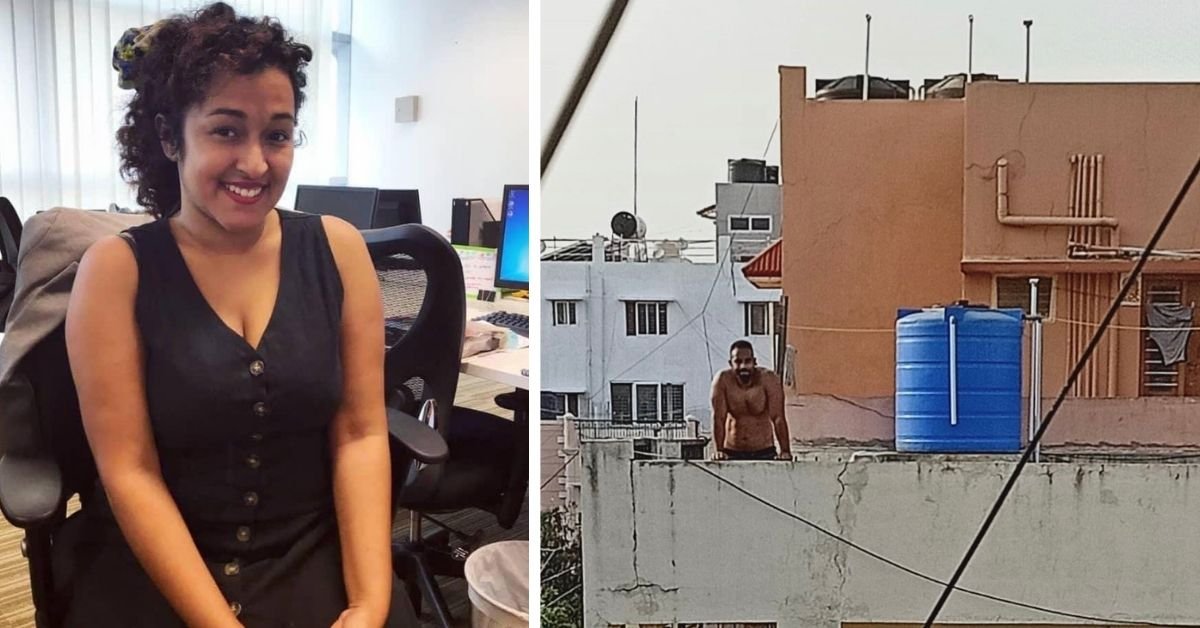 On November 8, a resident of Koramangala, Bengaluru, reached out for help through an Instagram post after she was flashed by a man from a terrace.

On 8 November, Nupur Saraswat, a resident of Koramangala, Bengaluru, reached out for help on an Instagram post. She was flashed by a man standing on a terrace, who lives two blocks from her apartment. As the houses in her locality are not spaced out, she got a clear view of the perpetrator from her window.

“I moved into this apartment one month ago. His house is not very far from mine. He stood there staring at me for an hour, which made me very uncomfortable. The first thought in my head was to not stay silent. The second thought was of fear because he knew which building I was living in. So, I yelled at him and used abusive words. Immediately, his pants dropped and he gave me a disgusting smile while he held his penis at me. I threatened to take pictures of him and when I brought out my camera he pulled them back up and stood there watching me!” exclaims Nupur as she narrates the incident.

The incident, though horrifying, is not uncommon. Several women have found themselves in such uncomfortable situations but have not been able to raise their voices perhaps due to fear of being judged, “inviting” more trouble or simply being in shock when it occurs. However, Nurpur wanted to change that and find a way to deal with this legally.

Initially, Nupur was sceptical about calling the police and decided to get counsel from women helplines. She tried reaching out to Vanitha Sahayavani, 1091, and National Commission For Women (NCW) but they were not reachable. Finally, she called the police and got the pervert arrested.

Here’s how she did it:

First, she informed her landlords about the incident. Though they do not live in the same apartment, they sympathised with Nupur and asked her to approach the police. Then, she shared her traumatic experience on social media to ask help from friends, activists, NGOs and lawyers.

UPDATE: this man has been arrested. I want to thank all the NGOs, friends , and friends of friends who poured in with sound advice. Asking for help/ Recourse/ Bangalore/ Koramangala: I’ve lived in this house for over one month now. And I’ve never seen this man before. His distance/ view of my terrace is in the forth slide. He waited there for hours looking at me which made me uneasy but not to an extent that I needed to ask him to fuck off. Then at a point when he knew I was looking, he pulled his pants down and held his penis at me. Smiling that FUCKING smile. He is two, TWO buildings away from me. I live alone in the terrace house. I have informed my landlords. The next step is to figure out a way to get legal help. Is flashing an offence in India? Is there a helpline I can call? And how do I make sure that something happens and I am not left in a position where this person a) knows I have reported him b) is scot-free. The last picture is of me. Before this. Before I realized that I was about to feel v,v threatened in a house I have come to love. Before I would be shaking in anger and embarrassment (????) and second guessing if it is my solitude that provoked him or my outfit. I could SCREAM right now but I want to channel my anger in a tactical way. So if YOU can help me, please DM me

Her social media post began with the question – “Is flashing an offence in India?” Some legal experts and activists replied to her and informed her that it is a punishable offence to flash a woman in public. Some sent her messages explaining horrifying experiences, similar to her own. But there were also comments from people asking her to ignore it and walk away.

However, as more and more women came forward with their experiences she realised that at some point in their life they have gone through similar traumatic experiences, and they stayed silent because they did not know what to do.

“While the law is still in a grey area (over such cases), I wanted to raise my voice against the accused and get him the punishment he deserved. So, I called the police and on 9 November. From Koramangala police station I was connected to the Viveknagar station. The man was identified and arrested. I was also escorted to the station for filing my complaint,” she says.

Soon, more people in the neighbourhood became aware of what Nupur had gone through.
“A lady in my building approached me about how her 15-year-old daughter was also flashed by the same man. After she informed her mother of what happened, the two of them have stopped going on to the terrace, fearing that man,” says Nupur.

The following day, the police informed Nupur that they would have to let go of the man with a strict warning. Her next resort was to approach a lawyer but knowing that it would be a long, tedious process, she decided not to put herself through that.

Reiterating the fact that no one should stay silent on such matters and that every action has a consequence, Nupur says, “The most important lesson I learned from what happened in the last two days is to never stay silent. If you are being harassed, raise your voice, let others know and seek help. And even though he is being released, his landlord informed me that he will be evicted from his residence by the end of this week.”