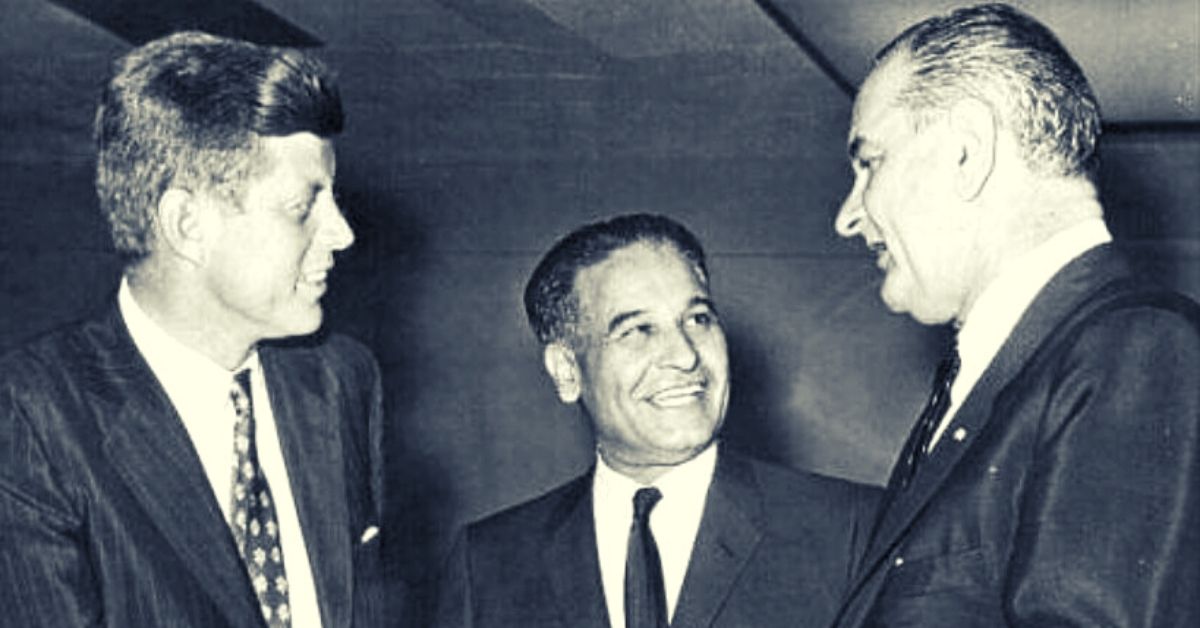 Representing California’s 29th District, Dalip Singh Saund was the first Indian-American to serve in the US Congress and the first member of a non-Abrahamic faith to be elected to the House.

One such person was Dalip Singh Saund, a Punjabi immigrant who 64 years ago to the month became the first person of Asian descent to be elected to the US House of Representatives. Representing California’s 29th Congressional District, he was the first Indian-American to serve in Congress and the first member of a non-Abrahamic faith to be elected to the House. He was re-elected to the office two more times with a comfortable majority in 1958 and 1960.

Like Kamala Harris, who served as an Attorney General and Senator from California, Dalip, too, made his mark in American national politics from the same state. As a Representative, he fought for farmers in southern California, civil rights and served in the prestigious House Committee on Foreign Affairs, where he planted the seeds for greater India-US relations.

Born on 20 September 1899, and raised in Chhajjalwaddi village near Amritsar, Punjab, Dalip was raised in relative prosperity to an uneducated but industrious and successful Sikh family. It was in college, while studying mathematics at the University of Punjab, where he championed the cause of Independence from the British colonialists after getting inspired by Mohandas Karamchand Gandhi’s ideals of nonviolence and Satyagraha.

Armed with a BSc in mathematics after the end of World War I, Dalip wanted to study in the United States after getting inspired by the writings of Abraham Lincoln. The initial plan was to study the fruit canning business for a few years before coming back to India and setting up shop. “While he waited for his passport, (Dalip) Saund worked to expand his childhood school, planted trees along the roads throughout his village, and helped establish two community banks,” notes this US House of Representatives profile.

Dalip eventually landed in New York on 27 September 1920, before moving out west for his higher studies. By the end of 1924, however, he had earned a Master’s degree and PhD in mathematics from the University of Berkeley, California. Outside the university campus, however, students of Asian descent had to put up with a lot of xenophobia. He recalled how “it was made quite evident that people from Asia—Japanese, Chinese, and Hindus—were not wanted”. But that didn’t stop him from getting involved with the local community.

Moreover, following his studies, his family informed him of how the colonial government back home had been keeping tabs on his “anti-British utterances in America”. During his studies, he had joined the Hindustani Association of America, a local civil society group of Indian immigrants, and was even elected its president. “AIl of us were ardent nationalists and we never passed up an opportunity to expound on India’s rights,” he once wrote.

Taking his family’s warnings seriously, he stayed back in the States and wrote a book titled ‘My Mother India’, which spoke of his experiences in India and critiqued British imperialism.

He soon moved to Imperial Valley in southern California, where many other Indian immigrants had settled. His first job was as a “foreman of a cotton-picking gang at a ranch belonging to some Indian friends.” After saving up some money and borrowing some from his friends, he became a farmer and entrepreneur selling lettuce.

In 1928, he married Marian Kosa, a school teacher and daughter of a close friend, and together they had a son and two daughters—Dalip Jr. Julie and Ellie. Initially, the family settled on a ranch near Westmoreland, California, although legally they couldn’t own or lease land because of a State law that prevented people of Asian descent from doing so.

During the Great Depression, farmers in the region suffered immensely. Although Dalip remained relatively unsacthed, he did suffer some unexpected losses after the economy rebounded and went into debt. He did not file for bankruptcy, but instead fought his way through. By 1953, he had enough to start his own fertiliser business.

Making a mark in politics

Besides farming, however, he was closely engaged with local politics.

By 1932, he wrote in his memoirs, “I had positively and definitely become a Democrat by outlook and conviction,” thanks to the New Deal which then President Franklin D. Roosevelt initiated to help American farmers and people out of work.

“Saund soon became a familiar figure on the local lecture circuit, speaking to California civic organisations and churches about such topics as the work of Mahatma Gandhi and the fight for Indian Independence from Britain,” notes this Pew Research Center brief.

But there was no way he could further his political activities because the US Supreme Court barred Indian Americans from citizenship in America. As per the court, a Hindu (all South Asian communities were clubbed under “Hindu” by American institutions) “is of such character and extent that the great body of our people instinctively recognise it and reject the thought of assimilation”. The same ruling had prevented him from teaching at a university.

In the early 1940s, he started to organise local efforts towards ensuring people of Indian descent living there could obtain American citizenship.

“Saund’s political career began in 1942 when he was elected President of the Indian Association of America. In this role, Saund raised funds to lobby for Congresswoman Claire Booth Luce’s bill for citizenship rights and to allow individuals of South Asian descent to become naturalised citizens,” noted a 2013 letter by a group of 14 US Congressmen from California seeking his induction into California Hall of Fame.

Finally, after much lobbying, the US Congress passed the Luce-Celler Act of 1946, which allowed South Asians to apply for admission and become naturalised US citizens. Dalip became a US citizen three and half years later on 16 December 1949. Three years later, he was elected a local judge in California.

“During his four-year judgeship [1952-56], Saund worked to institute stiff sentencing that helped clean up blighted areas of Westmorland. He earned the reputation as a firstrate legal mind, going head-to-head with more practiced attorneys. Saund’s judgeship became a huge part of his identity and served as a springboard to national office. When he ran for the House, he ran as ‘Judge Saund’,” notes the US House of Representative Profile.

After winning the nomination from the Democratic Party, he took on his Republican opponent, Jacquenline Cochran Odlum, a decorated Army pilot.

Despite heavily outspending Dalip and talking up her connections in Washington, his grassroot campaign on local issues and a firm commitment to small-scale farmers and small businesses helped him win roughly 52 per cent of the vote.

“Californians have not always been hospitable to aliens—and especially to aliens of Asian origin. In this election they ignored ancestry and considered the individual,” observed the Washington Post. Meanwhile, a local farmer told one magazine, “He’s growed cotton. He’s growed lettuce and beets. He’s worked in hay and he’s worked for wages. And he won’t let any smart aleck lawyers trick him. That’s why we sent him to Washington.”

Shortly after his first election, the New York Times described him as “a stocky, dynamic, perpetually grinning man whose walnut skin threatened to handicap him in a race conscious section where there was some informal school segregation until a couple of years ago. This evidently was more than offset by his manifest dedication to American ideals and by his articulateness…He looks like an average business man or schoolteacher, and with his serviceable ‘border Spanish’ has occasionally been mistaken for one of the Mexican-Americans numerous in the district.”

Serving at the House

Once elected, he served in the powerful House Committee on Foreign Affairs, which considers legislation that impacts American diplomacy. Dalip immediately found a place on the high table of American politics at a time when the US was in the middle of a Cold War. In his next two terms, he also served on the Committee on Interior and Insular Affairs.

Alongside fighting for his farmers in southern California, he also supported the 1957 Civil Rights Bill. Besides recounting his own story, he said, “No amount of sophistry or legal argument can deny the fact that in 13 counties in 1 State in the United States of America in the year 1957, not one Negro is a registered voter. Let us remove those difficulties.”

Meanwhile, in the same year, he also made his first trip back to India after 40 years. With India unwilling to take sides during the Cold War, he ventured to clear up any “misunderstanding between the people of the United States and India” and emphasised the shared democratic spirits of both countries. On 25 November 1957, both Dalip and his family landed in Kolkata and spent three weeks touring the country.

As a representative of the House Foreign Affairs Committee, he “helped to create a new realisation among thinking Indians that they have friends in the United States sincerely devoted to advancing the cause of India”, according to one reporter covering his trip. He even addressed a joint session of Parliament.

Meanwhile back home, he was also deeply critical of American foriegn policy.

During debate on the Foreign Assistance Act of 1961, he said, “That has been our mistake all along. We have been identified with the ruling classes. We have been coddling kings and dictators and protecting the status quo. The status quo for the masses of people in many lands means hunger, pestilence, and ignorance.… And we then wonder why the poor people of the underdeveloped areas of the world do not appreciate the help of Uncle Sam.” Nearly six decades later, you could use the same statement to indict American foreign policy.

His stunning career in politics, however, came to a tragic halt when during a flight from Los Angeles to Washington DC on 1 May 1962, he suffered a massive stroke. Although he won the Democratic primary for reelection, he couldn’t campaign in the battle against Republican Patrik M. Martin and lost his seat. On 22 April 1973, Dalip suffered a second stroke and passed away at his home in Hollywood, California.

The legacy he leaves behind is immense. Although some of his views on the caste system and the role of women in Indian culture were concerning, he was for the most part a trailblazer for human and civil rights and for the Asian-American community. It’s thanks to people like Dalip Saund that today Kamala Harris, Pramila Jayapal, Bobby Jindal, Nikki Haley and Tulsi Gabbard, amongst others, have a prominent place in US politics.

And there seems to be no better time than today to celebrate his remarkable life.

(Key sources for this article: ‘Triumph and Tragedy of Dalip Saund’ by Tom Patterson published originally in the California Historian in June 1992 and History, Art and Archives: United States House of Representatives)