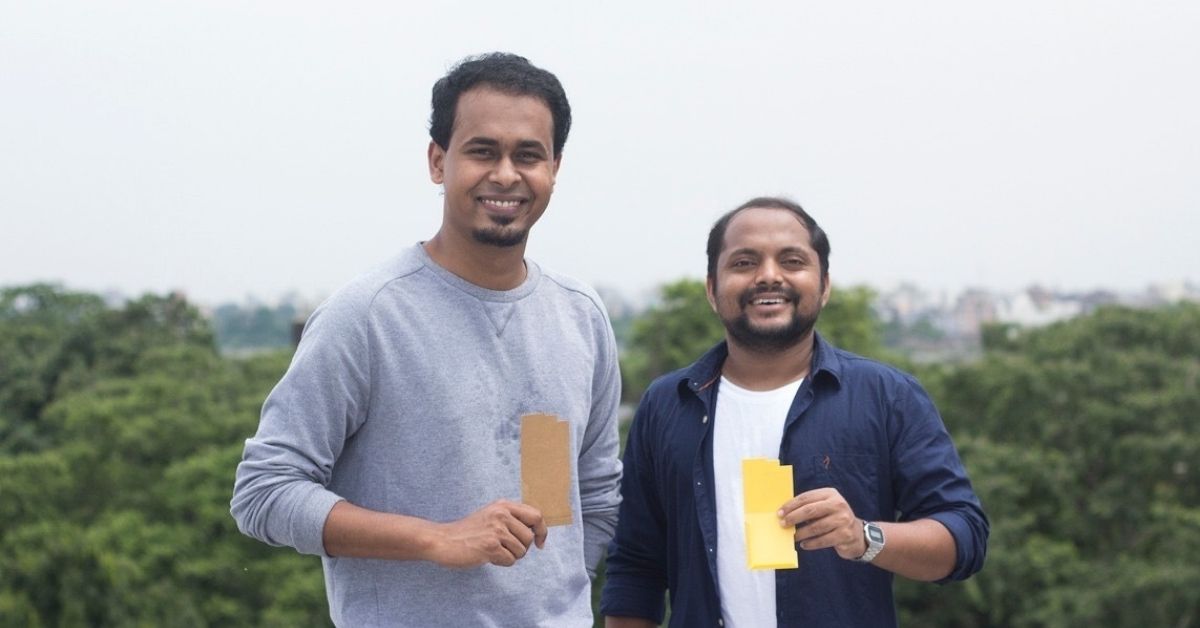 Two students from National Institute of Design, Ahmedabad – Mani Teja Lingala and Mrudul Chilmulwar – have designed a pocket-sized piece that acts as a template.

In 2016, the government of India announced demonetisation, which made Rs 500 and Rs 1000 notes invalid. While many struggled to get old notes exchanged for the newly introduced notes – there was another problem that came along with it.

But, the new ones are of different sizes, patterns and colours.

Though the Reserve Bank of India has launched a mobile application to identify these currencies, not everyone has access to technology.

This piece of technology is simple and does not use braille or any confusing technology. It can help visually impaired persons recognise currency notes using two parameters – width and height.

“In 2018, at NID, we had a module that was about product design for people with special needs. With help and guidance from our faculty Gayatri Menon, my teammate and I took up finding a solution for people with visual impairment. Initially, we were focussed on finding solutions to help them navigate from one place to another. But, during the research phase, we spoke to many at The Blind People’s Association in Ahmedabad and realised most of them had trouble identifying currencies,” says Mani Teja.

One person identified currencies by judging the length of each note. But, sometimes in a hurry, he would misjudge the amount. Another person would ask the shopkeeper or someone standing near him to identify the currency.

Mr Gopal, the Principal of the Blind school run by the Blind People’s Association in Ahmedabad, says, “The new notes have tactile marks on their sides, but they are not easy to make out. It tends to fade owing to wear and tear.”

Another lady at the organisation who was partially blind would identify the notes based on the colour, but with the new ones, she would get confused between the Rs 200 and Rs 10 because they were of a similar shade.

“No one there had a fixed method or process to identify the currency. So, Mrudul and I brainstormed on what we could do. We ruled out using braille because many rural people do not read braille,” says Mani Teja.

Finally, they stumbled upon the idea of using a template that could be placed against the currency notes to identify the price.

Made of polypropylene plastic sheets that were cut using a laser cutter, this template can be placed against currencies to identify the amount. With various cuts made in the template, the notes can be recognised using two parameters – width and height.

Mani Teja says, “We decided to use polypropylene plastic sheets because they are firm in nature, foldable and waterproof.”

When a currency is placed against this template if the width of the note goes beyond the template, it is an old note, and if it is within the template, it is a new one. To know the denomination, there are three edges on the top (like steps) to identify based on height.

Here’s a video that explains how to use it:

The product’s design was finalised the same year, and the team priced it at Rs.2. They also applied for a patent which was approved in 2019. While the product’s production has started the team has been unable to distribute them owing to the pandemic and subsequent lockdowns.

But, the idea and design made them finalists at the Lexus Design Awards, and The James Dyson Awards 2020.

In March, the duo graduated from NID, and Mani Teja started working with a design agency named Studio Carbon while Mrudul works as an independent designer.

If you wish to place an order for ‘Drishti’ or know someone who can benefit from it, you can contact Mani Teja at Teja@studiocarbon.in or maniteja.lingala@gmail.com.