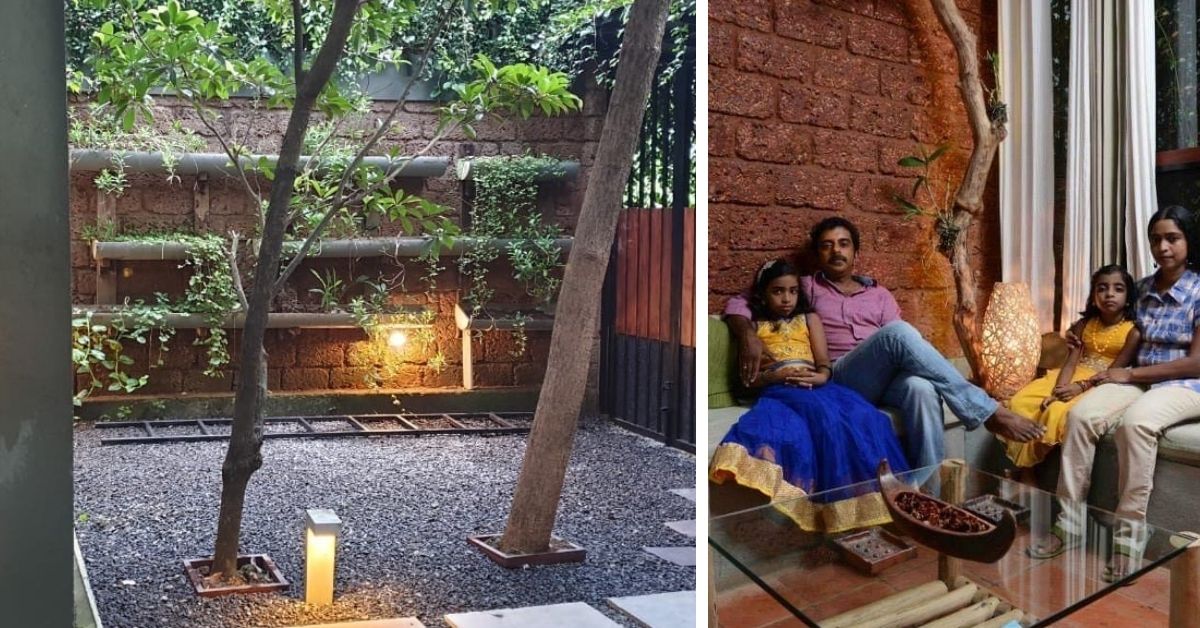 In 2013, Biju Balan, an architect by profession, decided to move out of his rented home in Kollam, Kerala and purchase a 1700-sq-ft plot in Malaparamba town of Kozhikode. He had one goal – to build an eco-friendly home using no concrete.

“After completing my architecture course from TKM College in Kollam, I learned that concrete is something that does not decompose or have any value once discarded. Old homes built in Kerala were made from eco-friendly or recyclable material such as mud, terracotta, and laterite. So, when I decided to build my own home, I wanted to use materials that could either be reused or become one with nature,” says 44-year-old Biju.

While designing the home that he named ‘Chaman’, meaning garden, he had three important aspects to focus on – using eco-friendly materials, recycling elements from demolished buildings, and designing a home with natural sunlight and air.

Today, Biju, his wife and two children live in a beautiful home that is well-lit, ventilated and one that has creepers like passion flowers and cat’s claws growing all over it.

The 1500-sq-ft-house is situated on a rectangular plot and in the middle is an open-roof, 500 sq ft wide courtyard that has fruit-bearing trees such as mango, custard apple, and Chamba fruit tree, also known as the rose apple. A small pond with fishes swimming among aquarium plants that were planted by Biju also features in the yard.

The house has two entrances. The first one leads to the living room, a portion of the courtyard and an open kitchen-cum-dining area. Alongside the dining room is the master bedroom and a staircase, made of wooden planks that are used to access the first floor of the house. This floor has one common area and two bedrooms.

Biju says “There is also a second entrance into the house which directly takes us into the courtyard. But this is kept closed using a push grill gate. We park the car in front of it, and sometimes when there are guests we open it to accommodate one more car by occupying a little space in the courtyard. Also, the sidewalls of the courtyard were raised high to maintain safety.”

The living room is both well-ventilated and well-lit due to the courtyard and tall windows. The lower half of the windows can be opened separately for more ventilation.

The entire house is built using cement boards and laterite bricks. These were plastered with mud, sand, and resin from cashew nut trees. The flooring is of Kota stone and terracotta tiles. Some of them were purchased, and some were upcycled from demolished homes.

“All of the materials are eco-friendly, and laterite bricks are reusable. Laterite bricks oxidise when it comes in contact with water, which makes it stronger. Most people are not aware of this fact and tend to plaster their homes with concrete. This causes water to seep into the walls and cause mould or water damage. The resin from cashew nut trees is very sticky. Hence, it binds well with mud and makes the structure stronger,” says Biju, adding that he did not use artificial paints for the exterior and instead applied a coating of traditional lime paste.

The central courtyard ensures there is air circulation throughout the house. The flooring is laid with Kadappa, Kota and laterite stones, which helps reduce water seepage in case of heavy rains.

Biju says, “The trees are placed within small rectangular frames made of wood. We have also added some organic fertilisers to ensure they grow well.”

Post the construction of the house, Biju noticed there were some PVC pipes left unused after the plumbing lines were installed. He used these pipes by drilling a few holes and creating a vertical garden on the walls. Now, there are flowering plants, and creepers growing on it.

Every evening, Biju, his wife and two children spend time on the courtyard, sipping their tea, coffee and eating snacks. They also have some unannounced visitors like birds who step in to feed on the fruits growing on their trees in the courtyard.

“During the day, we don’t require fans or lights in the living or dining room because of the open courtyard. If we do not want too much light, we pull down the bamboo curtains installed between the two,” says Biju.

Behind the courtyard, there is also a 40ft well which is left partially open to collect rainwater. A net covers the top to ensure no leaves fall inside it.

Another unique feature of Chaman is the dining area that is situated in front of the open kitchen. Biju says that the dining table and the chairs were custom-made. The table is a broken sewing machine’s base that has a thick glass attached to it. The chairs are made from wooden blocks discarded by matchstick making industries.

Biju says, “One chair is a light-weight wooden log, with wheels attached to the bottom. The wheels are made from discarded gears of a bike. This chair can accommodate two people and can be moved from the dining table to the coffee table located in the courtyard.”

Some of the doors to the house were upcycled from old homes, and the cupboard was made from plywood with no chemical coating or paint.

The construction of this house was also budget-friendly and cost Biju Rs 27 lakhs. But, he says if the same were to be constructed now, it would range between Rs 30-35 Lakh.

With his eco-friendly home, Biju has reduced the burden on Mother Earth, and for the same reason in 2015, he won an award that was presented by The Indian Institute of Architects (IIA).

The architect also has a company named Laurel Designs which has constructed eco-friendly buildings for his clients in Kerala, Karnataka, and Tamil Nadu.