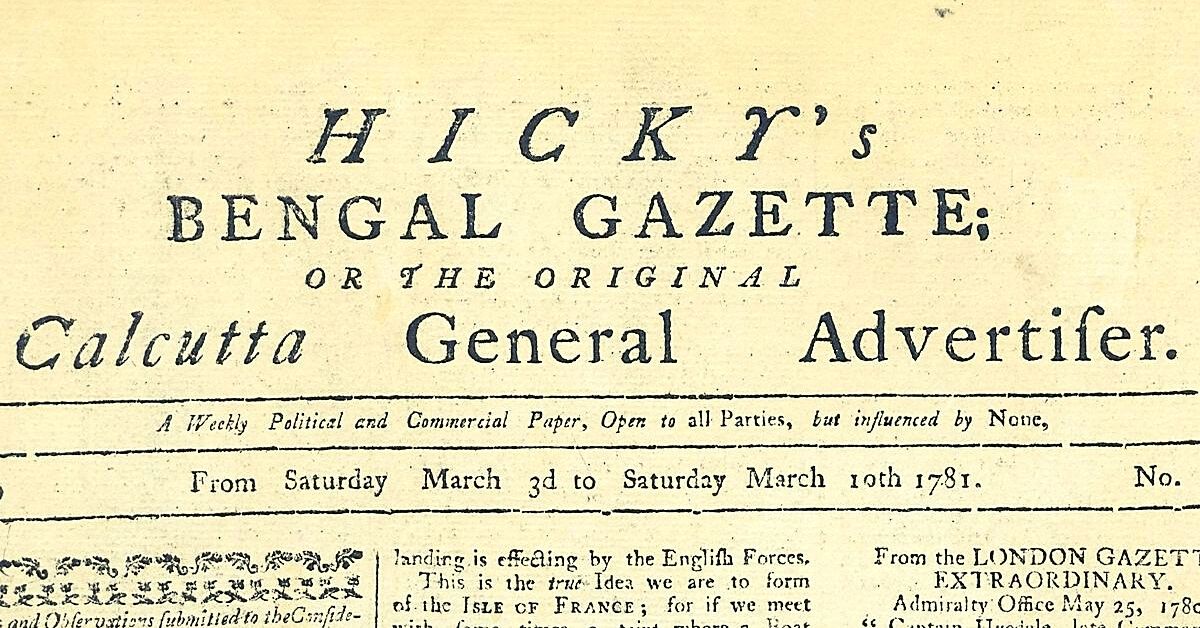 James Augustus Hicky’s Bengal Gazette reported on the troubles of native residents in Kolkata, challenged rampant corruption in the East India Company and even questioned why Britain was fighting wars in India.

James Augustus Hicky’s sojourn in India began in a rather inauspicious manner. The Irishman behind the establishment of India’s first-ever newspaper was a one-time surgeon, who arrived in Kolkata (Calcutta) back in 1776 to establish his shipping business.

Unfortunately, the shipping business fell apart. Unable to pay back the money Hicky borrowed from the banks, most of his belongings were seized, while he went to prison for a short while.

(But he did manage to squirrel away Rs 2,000 with a trusted friend. This money was eventually used to order types and construct a printing press.)

After spending a few years in prison, Hicky was released, and on January 20, 1780, he put out the first issue of the Bengal Gazette. Priced at (rather hefty) Re 1, Hicky’s Bengal Gazette initially sought to “cover everything that might be important to Calcutta, devoting many sections to politics, world news and events in India,” according to historian Andrew Otis, the author of ‘Hicky’s Bengal Gazette: The Untold Story of India’s First Newspaper.’

Suffice it to say; the newspaper was a sensation in Calcutta. Hicky and his correspondents would cover issues ranging from the poor standard of sanitation and road infrastructure in the city to corruption in the East India Company and higher echelons of society.

In the book, Otis writes about Hicky’s criticism of the Governor of Madras, Sir Thomas Rumbold, who was recalled to England to answer charges of corruption in front of the British Parliament.

“Hicky sarcastically wrote that Rumbold was a ‘great man’ for ‘only’ amassing a fortune of about £600,000 while in India, much of it from bribes and extortion. For now, this was Hicky’s only mention of corruption,” writes Otis. More importantly, he gave the city’s native poor a voice through their letters which he published, and he covered stories that mattered to them.

Take the example of the terrifying fires that engulfed the homes of poor Bengalis in the city because of the grass they used from the Hooghly to thatch their roofs. These fires would burn down thousands of homes at a time during spells of extreme heat in the dry seasons. The city’s narrow roads and unpaved streets made it near impossible to control them.

During one particularly disastrous fire in March 1780, every house from BowBazar in the north to Colinga in the east was eviscerated. “The dreadful havoc the late fire has made amongst the poor Bengalis is almost incredible,” Hicky wrote. While 190 died, another 15,000 straw houses were burned down thanks to the fire.

“Thousands were left homeless, with no food, water, or clothing. Even Hicky was affected. His bungalow and little outhouses in his garden had been consumed. He called for action in his newspaper, asking the rich and powerful to give food, and more importantly, shelter and clothing. He insisted the Company do something to help,” writes Otis.

In his publication, Hicky wrote a short note to the ‘Benevolent and Powerful in the city stating,

Be it known that fifteen thousand Inhabitants of Calcutta are since the late Fires in extreme Distress, their small possessions having been consumed … but a more dreadful foe awaits them, lingering Diseases, exposed to the extremes of heat and cold, destitute of clothes and dwellings, to feed them may only prolong their misery: many of our Aged have laid down content to die, and the Infants wailing in their Mothers bosoms increase the calamity beyond the power of language to describe … Ye Patrons of the Unfortunate, Exert your influence, clothe [them] and give them habitations.

However, it was his criticism of Britain’s wars in India and virulent criticism of Governor Warren Hastings that truly ticked off the East India Company establishment.

What is Britain Doing in India?

Besides reporting on the poor standard of pay and working conditions for lower-ranked European and Indian soldiers fighting for the East India Company, he also covered their wars in great detail, particularly the Battle of Polilur in September 1780, when Hyder Ali, the then ruler of Mysore, crushed the East India Company.

As Andrew Otis writes in his book,

Hicky turned against the war as death tolls mounted. The biggest turning point was the horrific Battle of Pollilur, when the king of Mysore, Hyder Ali, and his 90,000-man army ambushed one of the Company armies…The battle became butchery as the Company army was wiped off the map. Over 3,000 out of the 5,700 soldiers were killed. It was the single biggest British military defeat in India in a generation…The battle shocked Hicky and his belief that the British were superior to any enemy in India. As reports filtered in over the next few months, he learned just how disastrous the battle was, and how incompetent the Company generals had been…The battle made Hicky question why the British were fighting in India. The casualties made the war seem pointless, and he accused the Company of squandering their soldiers’ lives.

More importantly, however, he began to question notions of whether Britain was the good entity here, while the Indians were bad. Contrary to rumours that Hyder Ali’s army had massacred anyone they found after his army took Arcot, the Bengal Gazette reported how the captured soldiers were escorted to friendly territory, allowed to write letters home. Ali even had his own people delivering them.

Yet again, he never lost sight of how common citizens suffered in these wars. He wrote about the humanitarian crisis unfolding as thousands came flooding into Madras (Chennai) to escape the war, besides the famine and other human horrors that unfolded.

Hicky’s coverage of the war earned him an international audience. Many British, American and French news publications ended up reprinting his reports, often verbatim. “As the only newspaper in Asia, his gazette became an important source of information,” writes Otis.

Unhappy with his coverage of the East India Company, a rival newspaper was established in Calcutta called the Indian Gazette in November 1780, which had the support of Governor Warren Hastings who offered them the facility of free postage for distribution.

The Indian Gazette became the Company’s mouthpiece with all the perks offered by the establishment. But Hicky took on the might of the establishment. He alleged that a senior Company official with close links to Hastings’ wife had sought a bribe. This savage expose angered Hastings and subsequently passed an order whereby the Post Office would no longer extend its facility to the Bengal Gazette.

But he wasn’t going to give up without a fight and hired 20 courier men to deliver his newspapers. Moreover, its popularity grew massively. “The next week, he started an anti-tyranny, anti-corruption, and pro-free speech campaign using his newspaper as his platform, and words as his weapons,” writes Otis.

Besides going after corrupt Company officials, Hicky also exposed the shady dealings of a corrupt Christian missionary Johann Zacharias Kiernander. Eventually, both Hastings and Kiernander sued Hicky in June 1781. Given the charges against him, Hicky was sent to prison on five counts of libel with bail set at an impossible amount.

Although Hicky had his share of wins in these legal battles, while continuing to print his newspaper where he accused the Company of stomping on his freedom of speech, he was eventually sentenced to 12 months in prison and ordered to pay a fine of Rs 2,500.

By the time 1782 came around, he had barely any money left. He applied to be recognized as a pauper so that he could hold onto his printing press and type, but the court ruled against him and seized them. This brought the brief run of the Hicky’s Bengal Gazette to an end.

Admittedly, Hicky had his faults. His views on the role of women in society, for example, were deeply troubling and he often wrote in the deeply patronising tone of Western Orientalist scholars. But thanks to his contributions, India began to take its first steps in modern journalism, a tool which would come very handy later on during the Freedom Struggle and the years following Independence.