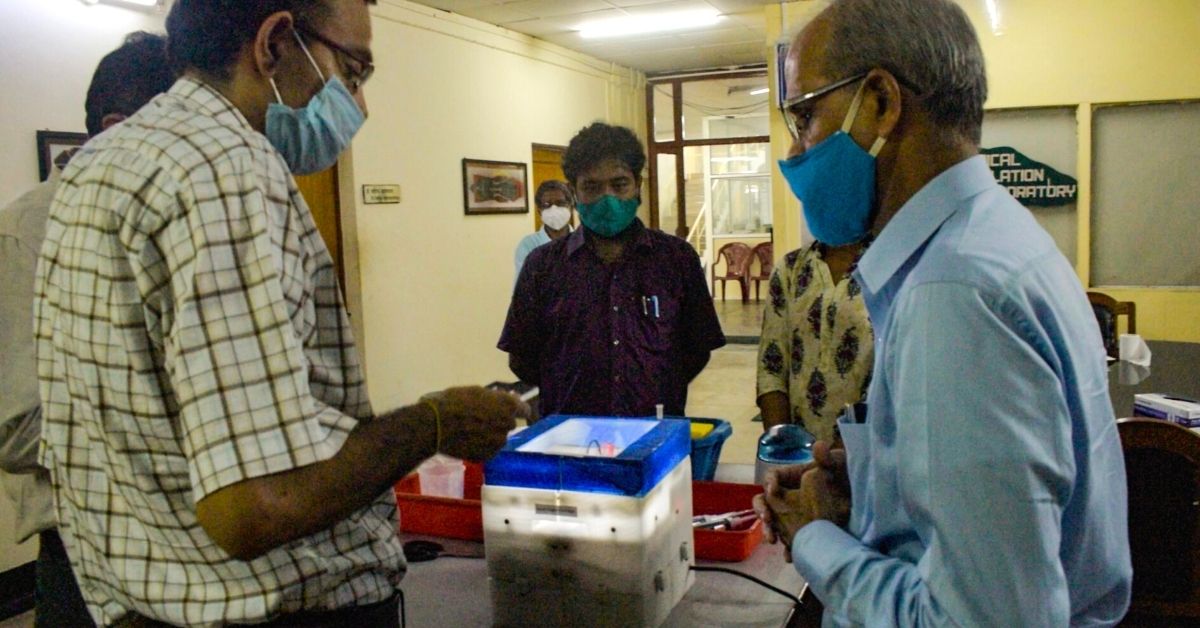 The new COVID-19 testing machine, developed by a team IIT-Kharagpur scientists, is certified by ICMR and enables testing for Rs 500, with 98 per cent accuracy

The country’s hospitals and testing laboratories severely strained by the barrage of Covid-19 tests they have to administer. However, scientists at IIT-Kharagpur claim to have innovated a new disruptive technology that could prove to be a game-changer. Meet ‘COVIRAP’.

Scientists say that their new testing unit, named ‘COVIRAP’, allows COVID-19 testing to move from the laboratory to a field or even under the shade of a tree. They claim the device is portable, affordable, has a high level of accuracy and can be operated by the average citizen.

The test results come within an hour of the diagnostics, they state.

“The testing unit in the shape of a cuboid box. It can potentially serve as a low-cost alternative to the Real-Time Reverse Transcription Polymerase Chain Reaction (rRT-PCR) tests currently being run, which require a lab and experts,” said Suman Chakraborty, Professor, Department of Mechanical Engineering Department, IIT Kharagpur.

Additionally, he claims that the rRT-PCR test machines cost an average of Rs 25 Lakh, with additional costs to operate the infrastructure. However, he claims, the new COVIRAP machine is priced at Rs 5,000, with an operating cost of Rs 500 per test.

Suman adds that the machine needs just one technical expert from a pathology lab, while the remaining functions can be by a layman following a set of instructions.

“It is recommended that the swab taken to extract the Ribonucleic Acid (RNA) is done safely with the help of a laboratory technician or preliminary biologist using an extraction kit to avoid the spread of the infection. The sample needs to get loaded in the COVIRAP. The remaining procedures can get performed by individuals without technical know-how,” he added.

Explaining the functioning of the system, Suman said once the testing sample is extracted, it is put in a set of master mixers and heated in the machine.

“The mixture is heated for a prescribed amount of time. Along with other processes, the procedure also ‘reverse transcribes’ the RNA into Deoxyribonucleic Acid (DNA), stabilising the sample. It is then added to another set of master mixtures, where the DNA is photocopied into multiple samples. The process allows finding the amplified signal that detects the COVID-19 infection,” Suman said.

“The problem with these types of isothermal (constant temperature) molecular diagnostic tests is the heating process, which requires a controlled environment to facilitate molecular diagnosis,” he said.

Shortcomings in this particular area cause high false positives or false negatives. “Our patented innovation, COVIRAP, ensures the shortcomings are overcome to bring the highest levels of accuracy,” Suman said.

Once the sample undergoes the process, it is cooled and dipped in paper strips similar to pregnancy test strips.

“If a line named as ‘test line’ in the strip in the identified locations becomes visible, the presence of the virus is confirmed, and the test turns positive. If the colour of the strip remains the same, the test proves to be negative,” Suman told The Better India.

COVIRAP: A technological solutions along with accurate COVID-19 results

The scientist said the results could be probed further through a smartphone application.

“A COVIRAP App has been programmed to detect the faintest of lines in the strips. The App uses a smartphone’s in-built camera to detect the line pattern, then processes and displays the results. All the processes are completed in an hour, and it allows ten tests to run simultaneously,” Suman said.

The testing machine is certified by the Indian Council of Medical Research – National Institute of Cholera and Enteric Diseases (ICMR-NICED).

“Using the same isothermal molecular diagnostic technology, the machine can be utilised to diagnose other diseases. Illness such as influenza, malaria, dengue, Japanese encephalitis, tuberculosis, vector-borne diseases and other infections can get detected. The testing machine can virtually minimise the need for thermal cyclers or real-time PCR machines, without sacrificing the expected high standards of a molecular diagnostic test,” Suman added.

But, conceiving the COVIRAP machine amidst the lockdown was very challenging, coupled with the demand for rigorous testing and the strict guidelines of ICMR.

Describing the experience as ‘horrible’, Arindam said that since the institute was located 150 km from Kolkata, this made the logistics a challenge. “Procuring the material from vendors was difficult with no transport allowed. On one instance, we asked the vendors to deliver supplies in an ambulance that was going to Kolkata and returning empty,” he said.

Arindam said that in early April, a massive fire gutted the lab into ashes. “It took two weeks to restore the laboratory, the administration was very supportive through the crisis,” he added.

The scientists said that though COVIRAP weighs roughly about five kilograms, much of it was made from materials available in the lab or the locality.

“The device lacks sophistication. But it will be developed eventually. The machine also operates by electricity, requiring about the same level as an induction stove. But it could run on battery or solar power,” Arindam said, adding it could be taken to any rural or distant location for testing.

The scientist also added that COVIRAP was better than antigen test kits, as it brings the accuracy closer to lab tests.

“The issue with the antigen test is it depends on proteins which cannot get amplified. Here, we amplify the DNA – which becomes a much stronger base,” he adds.

The scientists are already in the process of making the product commercially viable and have invited startups to take a leading role to make use of the testing machines.