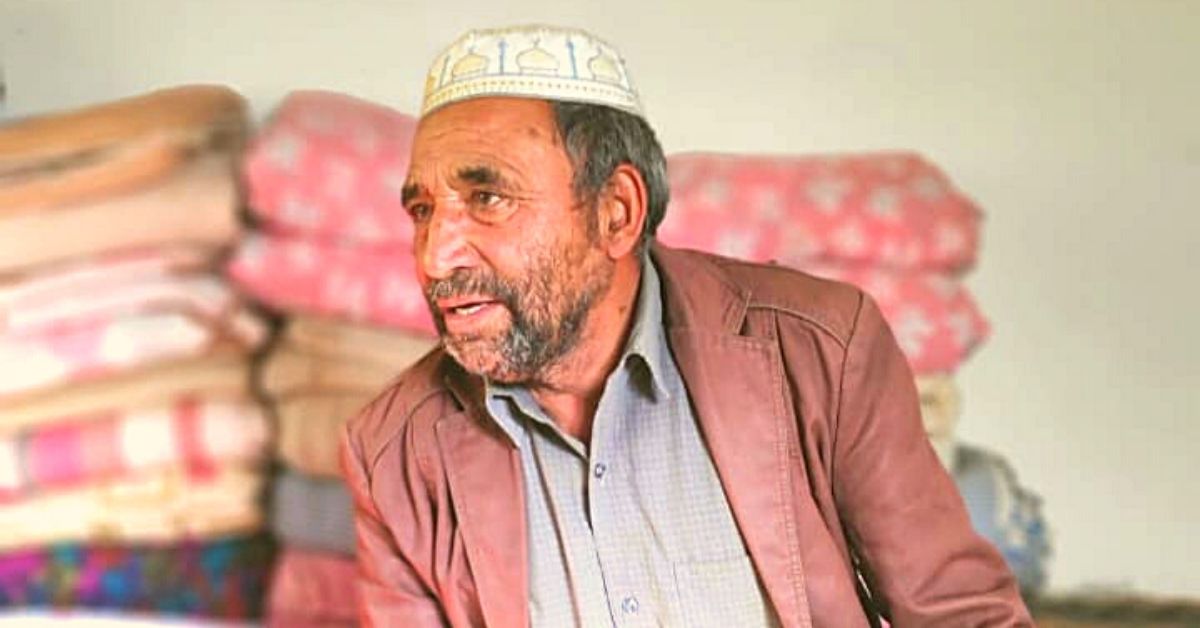 “It’s disheartening to see that people have already forgotten my father’s work. I pray and sincerely wish to resurrect his contribution, dedication and love for this beautiful land.”

(This is the second of a two-part series chronicling the remarkable life of Mistry Hassan, a mason, whose contributions to India and Nubra shouldn’t ever be forgotten. You can read the first part here.)

In the previous segment of this story, The Better India highlighted the critical role Ghulam Hassan (aka Mistry Hassan) played in the construction of the THOISE airfield in Nubra in October 1961, helping India better secure its borders with both China and Pakistan.

(Photo above: Ghulam Haider, the son of Mistry Hassan and the man responsible for preserving his father’s legacy.)

However, his first tryst with national service came in May 1948, when tribal raiders backed by the Pakistani army wreaked havoc in Ladakh.

“By then Pakistani tribal raiders had captured half of Nubra upto Skampuk village. Bogdang was under their control, and we realized that they had no respect for the Balti people. They committed rape, assaulted the elderly and subjugated the people who came under their control. Fearing what they would do next, my father escaped to Skampuk, where Indian soldiers under Subedar Bhim Chand were stationed. Initially, my father was misidentified as a Pakistani spy, but upon the urging of his acquaintances there, Chand changed his mind. My father would share strategically critical information with the Subedar,” recalls his son Ghulam Haider, in an exclusive conversation with The Better India.

Hassan would sneak back home, but unfortunately, as the Indian Army advanced towards Bogdang, the tribal raiders found out that he had helped the enemy. Their commander ordered the arrest of Hassan and his family. Still, before they could do arrest and torture them, they escaped to Fastan village where they stayed many weeks till the Indian Army recaptured Bogdang. Hassan’s family came back home with an army escort.

But this isn’t where his assistance for the Indian armed forces stopped. As a chief mason, under the supervision of British-trained engineer Sonam Norbu, Hassan helped construct the strategically vital Koyak bridge over the Shyok River in the mid-1950s without any cement.

They had to source locally available limestones from the nearby Khalsar village to construct the bridge. Until the 1980s, this was the only bridge which gave armed forces access to Daulat Beg Oldi (DBO) border outpost via the Sasser La mountain pass. Today, only a part of the Koyak bridge remains intact, and a bailey suspension bridge has replaced it.

However, not all his work was in service of the armed forces. Hassan was a man of the people. One of his biggest contributions to his fellow residents in Nubra was the construction of the Bogdang canal (the early 1940s) and Tablay canal (1958-1959) without a qualified engineer supervising them.

The 20 km-long Tablay canal is still a major source of irrigation (after multiple renovations) for two villages–Lakjung and Sumur. Taking no wages, he constructed this irrigation canal with assistance from residents. In return for their work on the canal, he asked the wealthy families from surrounding villages to donate food for the workers.

“Hassan was a great man. His contribution to both public works and defence in the region is immeasurable. I remember working along with him building the THOISE airfield. I was a Patwari at the time. Although we had engineers on-site, we had to rely on Hassan Mistry for the final approval of all kinds of civil work. He had a naturally gifted scientific mind despite a lack of formal education,” notes Tsewang Dorjey Dongbos, who served as Nubra’s Assistant Commissioner (civil administration) for many years, speaking to TBI.

His yeoman service to the people of Nubra also made life easy for the family.

“We never ran out of food because of my father’s service. In return for his innumerable contributions to vital developmental projects, particularly bridges and irrigation canals, our family often received free rations from the army, police and residents of nearby villages. In fact, one day, when I went to Hundiri village to buy flour, a lady asked about me. I told her my father was Mistry Hassan. Upon hearing this news, she started to cry and spoke of how my father saved her family’s life by constructing a canal,” recalls Ghulam.

Tragically, Hassan passed away when he was barely in his 50s due to blood cancer.

However, his son would carry on that fine legacy in helping construct nearly 30 bridges that linked different parts of Nubra Valley with one another, including the Nathru Bridge (after his nickname ‘Nathroo’) over the Shyok river, which remains a lifeline to DBO border outpost to this very day.

In some quarters, he is even considered the ‘Bridge Man of Ladakh’. Ghulam played more than a significant role assisting organisations like the Border Roads Organisation engaged in constructing strategically important pieces of infrastructure like bridges, roads or even clearing debris off them following landslides.

For example, sometime around 2008-09, he was called by engineers of the General Reserve Engineer Force (GREF) to inspect a bailey suspended bridge they were constructing across the Shyok river on the way to DBO. When Ghulam got there, he was surprised to see so many major faults in it. He warned the engineers that the bridge will collapse unless they introduced some changes to the layout and the foundation.

“In a bailey suspension bridge, the weight is carried by fixed suspenders that run between the main cable and the panel. There are many fixed suspenders running through the bridge. What I observed was that there were no fixed suspenders and the entire bridge was resting on a cable in the middle. Unable to carry all that weight, it would collapse under any significant load. I ensured that fixed suspenders were used. It’s still working and being used. Although the government has recently sanctioned funds for a new bridge there, work is yet to begin,” notes Ghulam, while describing his work.

Today, that bridge is named after him. It’s called Nathru Bridge, which still functions as a lifeline to DBO to this very day since it was inaugurated in 2009. Earlier there was no road connection. Instead, rations for soldiers stationed in DBO were either air-dropped or supplied on horseback via Saser La pass.

Speaking to The Better India, Colonel (Retd) AK Tiwari, who served in Nubra for two and a half years between 1988 and 1990, is all praises for ‘Nathroo’.

“At the time, I was a Major serving as an officer commanding (OC) the 54 Road Construction Company (RCC) in Hundar, Nubra. My responsibilities included the road from Khalsar to the Gorkha Ridge situated along the Line of Control (LoC). Nathroo was a very important part of our set up. He was responsible for finding labour and supervising their work on the ground. Working closely with him, I realized how much he cared about his workers. He pushed me to ensure injured workers were given monetary compensation on their doorstep instead of spending days obtaining it from the Deputy Commissioner’s office in Leh. Also, during one of our road construction operations, he pushed me into requesting the Indian Air Force to airlift one of our injured boys to the civil hospital in Leh,” recalls Colonel Tiwari.

Besides caring about his workers, Colonel Tiwari remembers Nathroo (Ghulam) as an extremely positive person who was also as effective in his work.

“Any work given to him was better than done whether it was clearing debris after a landslide or the completion of road construction targets. In a place like Nubra, where breathing is difficult, he never said ‘no’ for any work. He would only tell you the time and labour required for the task. That work would be done before time and with quality. With due respect to the thumb rules imposed by the Border Roads Organisation in terms of working hours and other conditions, he would always generate more than a 100% output from his boys,” he adds.

Despite his own immense contributions, Ghulam is more concerned about preserving his father’s legacy.

Speaking to The Better India with tears in his eyes, he says, “I expected the people of Ladakh to remember my father’s contribution for at least four-five generations. But it’s disheartening to see that people have already forgotten my father’s work. Not even two generations have passed since his demise. I pray and sincerely wish to resurrect my father’s contribution, dedication and love for this beautiful land. His life should serve as an inspiration to the younger generation, and he deserves greater recognition.”