Buried Alive As A Baby, How A Sapera’s Daughter Danced Her Way To A Padma Shri 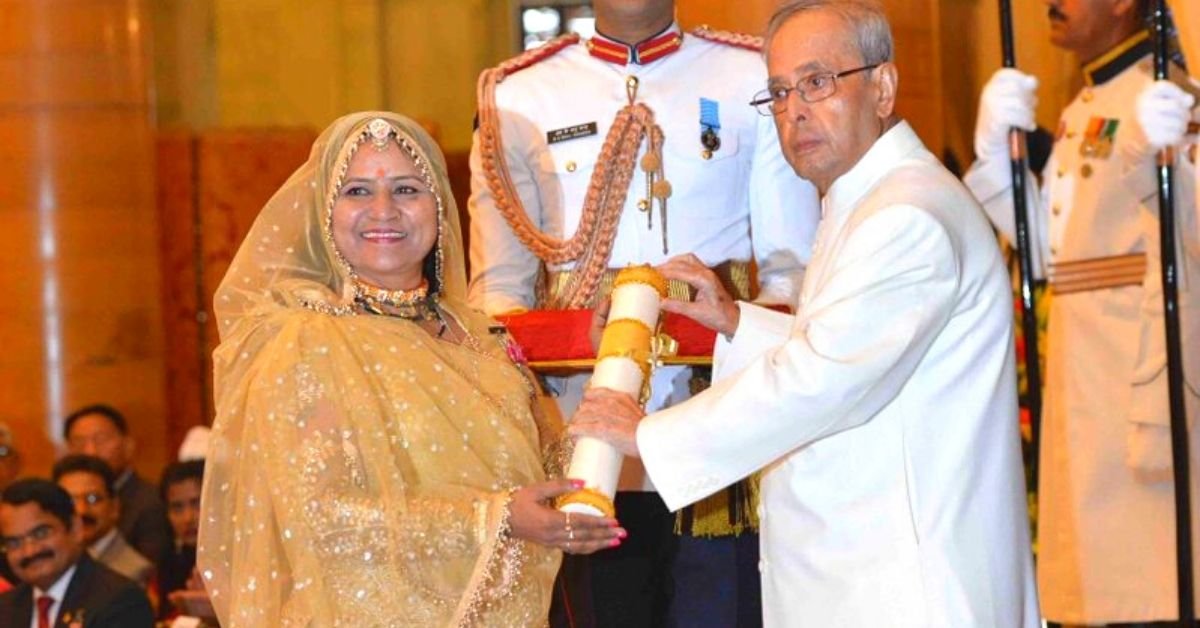 Whether it was turning abuses into applauses, becoming the president of a caste association that once ostracized her or putting the Sapera dance on the world map, Gulabo Saper's journey is incredible

“I was buried alive for nearly seven hours before my mother and aunt dug my grave and pulled me out after hearing my incessant cries. I do not know if it was the grass covering the soil that helped me breathe or simply a fighting spirit that gave a less-than-one-day-old baby from Ajmer’s Kotda village the strength. But I refused to give up on myself,” says Gulabo Sapera, who bloomed in the patriarchal landscape of Rajasthan and went on to create history in more ways than one.

Years later, this girl with an indomitable spirit was featured in a magazine; but her name was misspelt and, since then, to the world, she came to be known as Gulabo – the sensational Sapera (or Kalbelia) dancer from Pushkar who could bend in unimaginable ways.

When she turned one, Gulabo, originally named Dhanvati, fell seriously ill and the doctors almost gave up on her, but once again she fought hard to live. A rose was placed next to her in the clinic, and seeing the flower as a sign of goodwill, her father changed her name to Gulabi.

In 2016, Gulabo was bestowed with India’s fourth-highest civilian award, Padma Shri for her outstanding contribution in enhancing India’s folk dance culture. Apart from this prestigious award, recognitions and accolades have poured in ever since her first public performance in Pushkar Mela at 10.

“I still remember people clapping in appreciation and astonishment after seeing my first performance. I failed to understand why they gathered around, took a few minutes out of their lives to see me but I felt very special. For the first time, I was not judged for belonging to a lower caste or being a girl. Dance gave me a fresh identity,” she recalls. She takes her passion to grow as a dancer and welcome new developments very seriously. No wonder that, even at 49, she learnt video calling to launch online dance classes. The money she earns is used to support sapera dancers who are out of work due to the pandemic.

Gulabo’s life story is straight out of a film with many highs and lows, and it is her attitude of making the world a better place through her art that is the hero, or rather heroine.

Of Snakes And Dancing Gulabo’s father was out of the station when she was born. Upon his return, he learnt about the unfortunate incident that was a result of female infanticide, a practice that was prevalent in many parts of Rajasthan a few decades ago.

He called them out for their inhuman treatment of a newborn. Furious with the man’s fight for equality, the village heads ostracized the family.

Her father was a sapera or snake charmer who would go around the village with a basket of snakes to put up performances that would typically include hypnotizing snakes with an instrument called a pungi, juggling and other such acts. When Gulabo was barely six months old, her father started taking her on his performances. She would effortlessly tap to the tunes of pungi alongside the snakes and would copy their movements. From them, she learnt twirls and flexibility that later became the base of her brand of sapera dance.

Here’s her journey from dancing with snakes to being spotted by Tripti Pandey and Himmat Singh, who worked with the Rajasthan Tourism Department at Pushkar Mela.

Of Abuse and Applause

In the early 80s, Gulabo began a new phase of life after moving to Jaipur, one of India’s busiest cultural hubs, where people were less conservative. She became a part of the state’s cultural and tourism department. She started working on polishing her dancing skills here. She created her costume of the flowing black ghagra-choli and dupatta with decorative laces. The mirror work on the lehenga helps attract the attention of the audience.

To ensure that people find this dance easy, she stuck to no rules.

“It is a freestyle dance that heavily depends on fluid body gestures. From snakes, I learnt how to form a U-shape with the body, hip moves and swirls. It is mainly performed on the beats of the dafli, manjeera, dholak and chang (types of percussion instruments). There are no prerequisites to this dance. All you need is passion,” she says.

Over the years, she mastered her craft and participated in various functions organised by the government and even got an opportunity to be a part of the government’s contingent travelling to Washington D.C. for a show in 1985.

When she returned, most of the regional newspapers had covered the story of a sapera’s daughter making India proud in ‘Amrika’.

The same people who once humiliated her now welcomed her with open arms, “Women from our sapera community in Jaipur visited my house and insisted that I teach their daughters this dance. I was also flooded with calls from my native village, and people told me how proud they were. I could not believe that my art form was gradually eliminating the differences,” she recalls. Performing on the international stage was the turning point of Gulabo’s life and there has been no looking back since.

She has a humongous fan following across the world. One such fan is Jyothi Tommaar, who won a National Award for choreographing Padmavat’s song, Ghoomar in 2019.

“I was mesmerized to see the flexibility and the attitude with which Gulabo danced. Her circles, rhythmic tapping, and costume were very unique. The graceful body movements and her backward arch were unbelievable. Just like snakes, Gulado does the swinging, flexibility and hypnotizing circles. While I speak I have visuals in my head of her dancing with her charming smile,” Jyothi tells The Better India.

While there was glamour and appreciation, the journey has not been without its share of challenges. Even after being a part of so many shows, there are days when Gulabo and artisans like her are out of work.

“As artisans, we do get a lot of respect but we also need money to survive and this is something that the government needs to take care of,” she says.

Jyothi agrees with Gulabo and also highlights the dire need to preserve this art form.

“Late Prime Minister Rajiv Gandhi had started with zonal cultural centres, but very little is reaching to the deserving. With recorded music, TV, films and so many other available options, we are losing on our cultural heritage. The government must do something more constructive. We, as citizens, must respect our culture and should start showing interest in these art forms. I run my academy, the Gangaur Ghoomar Dance Academy, where we invite only authentic folk artists from Rajasthan to conduct workshops,” she adds. Gulabo also talks about how the lockdown has further created problems for artisans, “We have received minimal ration from the government but one dancer has to share it with a family of four or five, which is not enough. No solution that can create an alternate livelihood has been implemented. Dancers like me have the internet so we are managing but what about those who don’t?”

Despite such difficulties, Gulabo has managed to stay true to her art while creating her path and carrying forward the legacy. She credits her family members who have stood by her at all times. “In the initial days, my husband, Sohanath (a city-based classical singer and harmonium player) would visit gymkhanas, offices of private organisers and event management companies as my agent. His enthusiasm and respect for my work have played an instrumental role in raising awareness about this dance. My children have also learnt this dance and are now teaching others. Finally, I owe everything to my parents who believed I was born to do great things,” says Gulabo.

Whether it was turning abuse into applause, becoming the president of a caste association that once ostracized her for being a girl or putting the sapera dance on the world map, this legendary woman’s journey is exceptional.

Get in touch with Gulabo Sapera here