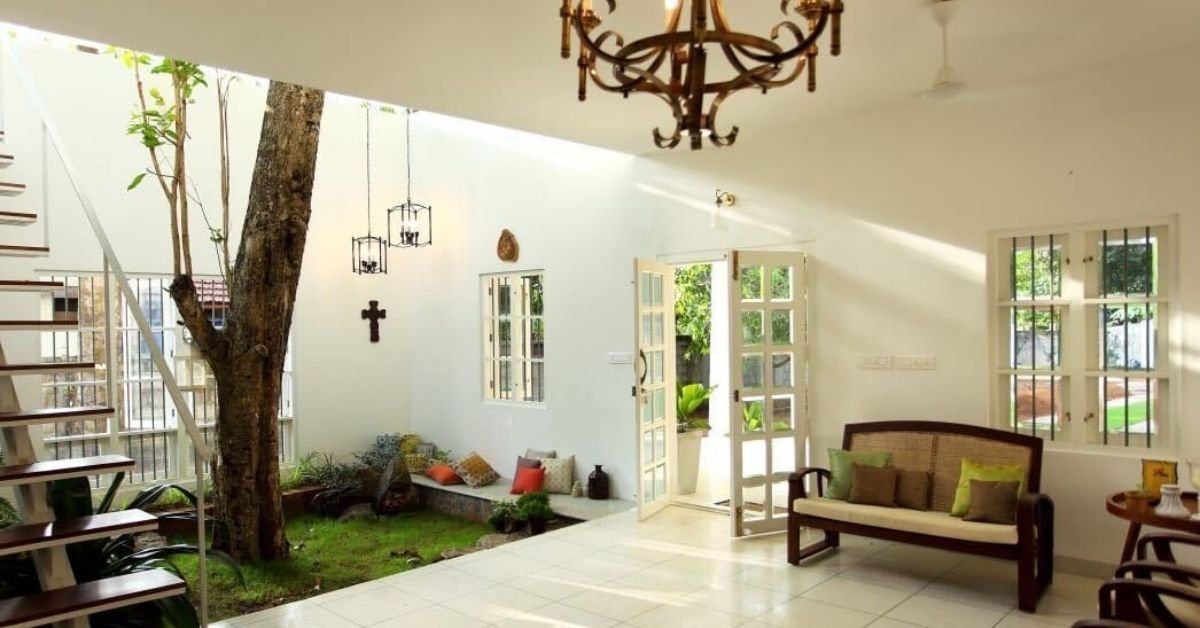 Land handed down from one generation to the next brings out different things in different people. Some accept the inheritance gratefully, recognising the piece of heritage they now call theirs. Many others give in to their greed and fight for more. Yet others receive that benefaction and enhance it.

Mathew Mathan, a 40-year-old resident of Muhamma (a bustling town in Alappuzha district in Kerala) belongs to the last category.

A strong sentimental attachment with what was bequeathed to him by his parents, and a genuine interest in architectural design prompted Mathew to design his new home around two large, old trees — one bearing fruits of mango, and the other jamuns.

His house, built over an area of 3700 sq ft., has dedicated space for the two trees — 600 sq ft for the mango and 200 sq ft for the jamun. Their home is located in a sprawling two-acre property where his parents and siblings have built their homes too.

Mathew says, “Owing to work, we (wife and two children) had settled in Cochin, but four years ago, my parents gave me a plot from the two-acre property they owned, to build my home. When I was planning the design for the house, two trees were standing in the way, and the only logical route was to cut them. But these trees have been there since my childhood. I remember climbing up and down the same, along with my five brothers. So I did not want to get rid of them, and instead decided to do something different.”

When one enters Mathew’s home, they are welcomed by a bright living space that is filled with sunlight and fresh air – thanks to a small courtyard he created for the jamun tree that is over 25 years old.

“I cleared out 200 sq ft from my living room and dedicated it to that tree. It has a 15 sq ft opening at the roof where it starts to branch out. At the bottom, there is a two-meter opening, around the bark, which has no flooring and directly opens to the soil,” says Mathew, adding that it is crucial to provide adequate space for water and air to reach the soil.

To ensure that the tree’s deep roots do not damage the foundation of the house before construction Mathew tried to understand where they were headed. “I did not approach any specialist for this; I reached out to caretakers of the property who understand the trees and flora as much as any environmentalist would. Since the roots were not growing towards the house, I was sure it would not cause any harm to it.”

The living room around the tree has a low ceiling that protects the rustic furniture that Mathew had customised. Farther ahead is a long corridor leading to the dining room that opens up to a bigger courtyard hosting the giant mango tree.

For this tree, Mathew dedicated 600 sq ft and covered his roof entirely with toughened glass to allow light to enter.

“Since there is sunlight entering the house at all times, I ensured that the glass was heat resistant. This prevents the room from heating up. I also planted several varieties of ferns around the courtyard to ensure the air remains cool, and the aesthetics are just right,” he says.

The mango tree also has a 15 sq ft opening on top which allows the branches to spread out, and rain to enter the roots. His two children even play in the rain while Mathew and his wife enjoy tea time.

“Initially, my wife was skeptical about having trees inside the house. She was worried it would attract lizards and other insects. But after hearing my plan of saving the trees, she gave me her 100 percent support. Though there are some lizards and insects, she loves the home, and we have found ways to work around that,” says Mathew.

The house has three bedrooms, a kitchen, and a terrace. It took more than one year for the construction to be completed, all the raw materials were sourced locally, and the entire project cost him over Rs.1.2 crore.

Mathew was earlier working as an independent photographer and ad filmmaker. As part of his profession, he would shoot videos for resorts and hotels in Kerala. It was during these shoots that he realised he had a passion for designing.

“I would have to design the room for shoots, and, sometimes, I would think about how it could have been built better. Five years ago, I offered to design a few rooms for a resort in Kerala called Hills and Hues. I drew designs for the room, and with help from friends who studied architecture, I got the structural designs done. The resort owner loved it, and I finished the project for him. Soon he requested me to do a few more rooms, a sit-out, and a swimming pool.

“In 2015 I started an organisation named In My Place, which is focussed on designing boutique resorts and homes.

Beejoy Koshy, the owner of a resort named Veena -by the beach says it is Mathew’s vision as a designer that brings out the best elements which no one can imagine. The resort is a 200-year-old mansion on the Marai beach which has a unique reception area on top of a tree.

He says, “The best thing about Mathew is that he brings out the beauty of a place without disturbing nature. On the property there were some trees which he has converted into an upper deck sit-out, and converted one tree into the reception area. While there were only a few trees on the property, Mathew introduced more plants which has now become a lush garden that leads to the beach. His utilisation of space is something that took us by surprise.”

Sanju George, who runs a resort named Hills and Hues located in Kumily says that those who visit the resort always leave rejuvenated after staying in the cosy rooms designed by Mathew.

He says, “I have known Mathew for many years, his work might be photography but he’s also a visionary. He converted this tiny piece of land into a heavenly abode. The rooms are very simple yet have a sophisticated charm.”

To date, he has completed eight projects and is currently working on something of his own along with his cousin sister. Though he didn’t reveal to us details or the location, Mathew says this will be a place where people can go to escape the hustle and bustle of life.

If you wish to know more details, you can follow his work here or email Mathew at inmyplaceprojects@gmail.com