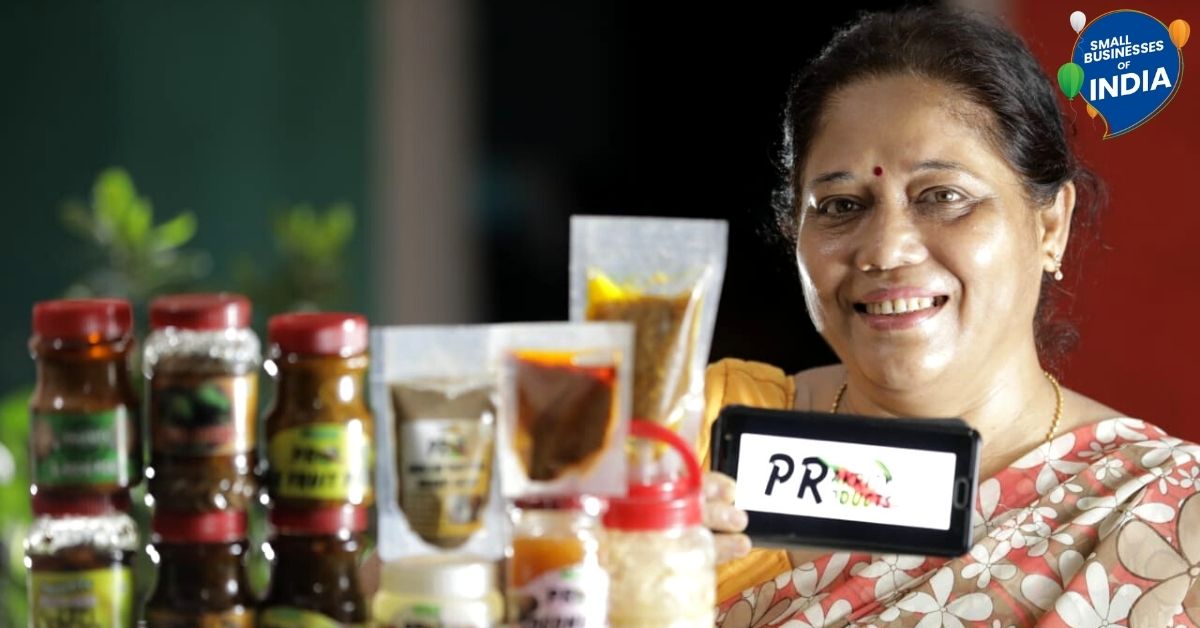 Assam’s Dipali Bhattacharyya invested a small amount to start her homemade pickle brand ‘Prakrity’. Here’s how she made a success out of her home business.

Dipali Bhattacharyya is an early bird. As a homemaker, entrepreneur and founder of Prakrity, a brand of homemade pickles and snacks, she likes to start her day at the crack of dawn and plan. She then goes on to make her take on ‘toast pitha’. Pitha is a traditional snack of Assam, and in her healthy version, instead of frying them in a pan, she bakes the mixture of rice flour, desiccated coconut and jaggery. She supplies about 50 of these toast pithas every day to a sweet shop nearby.

As a woman who loves experimenting with recipes, she has developed 25 different kinds of pickles. The more interesting ones are a turmeric-coconut pickle and even a mushroom pickle. All her products are handmade, and her daughter, Suditree Devya, helps her in business operations.

In a month, Dipali sells about 200 bottles of her pickles, not just in Guwahati but in other parts of the country such as Bengaluru, and Delhi to name a few. The homemaker-entrepreneur earns close to Rs. 5,00,000 in a year.

“My husband had thought of the name Prakrity when we would talk of starting a home business. He had always been supportive of my entrepreneurial endeavours, and this was my way of keeping his memory alive,” says Dipali, her inner light dimming as she reminisces about her husband who passed away in 2003.

In conversation with The Better India (TBI), the home entrepreneur from Assam shares her journey, which stemmed from a personal loss.

From Homemaker To An Entrepreneur

Dipali had always been popular among her family and friends for her pickles. But she registered her firm in 2015 after her husband’s death pushed her to pursue her business with greater vigour.

“In 2003, my husband suffered a heart attack and passed away. He was only 40 years old. He was a teacher at Asom Jatiya Vidyalaya in Assam; he taught maths, science and music to the children. He was very talented and was into theatre, and had written several children’s books. After he passed away, I lived with my mother-in-law and daughter, who was only nine years old at the time,” she recalls.

The homemaker took charge of her life and thought of ways to make ends meet, especially to raise Suditree. She participated in small-time cooking competitions and won several of them. Often, she would win cash rewards or articles like kitchen utensils.

She also came up with a range of ready-to-eat jolpan (breakfast) — a mix of rice powder, banana powder, puffed rice, flat rice, milk powder and sugar. Moreover, the multi-faceted home entrepreneur is well known for her dahi vadas and other kinds of pitha that one can place an order for.

Inspirations and Life in Assam

Although Dipali is based in Guwahati right now with her daughter Suditree, she was born and brought up in Jorhat, over 300 km away. She pursued her Bachelor’s in Arts degree from Devicharan Baruah College (DCB) there. After she graduated in 1986, she got married in 1990 and moved to Guwahati.

So, who taught her how to make her bestselling pickles?

“I always saw my father deeply involved in his spice business. My family had a brand called Gondhoraj Masalas. After my father passed away, my mother took over, and after that, it was my brother. But after he passed away too, we shut that business. However, I still remember how these unique spices were used to make the delicious pickles we ate at home. I would watch the process of making these very closely, and that is how I learnt,” says Dipali.

She adds that her mother-in-law was also a great cook, and, from her, she learnt some valuable cooking techniques like blending various combinations of spices for the pickles, which she continues to use to date.

In 1998, Dipali started a small food delivery business from home. She bought a scooter and employed a man who would deliver the orders. A great cook, Dipali saw that people began loving her dahi vadas, sambar vadas, idlis and aloo chops.

This came to a halt after her husband’s demise although she continued to sell her pickles in a small way. People would either directly buy the pickles from Dipali or the shops near her home.

Participating in several small-time cooking competitions benefitted her greatly. In one instance, the Coconut Development Board (CDB), which has an office in Guwahati, recognised her brilliant efforts in adding value to coconut-based products. This landed her an opportunity in 2005 where she was selected for a CDB-sponsored training programme.

As part of the training, she travelled to Kochi, Kerala, where she stayed for 10 days and learnt how to make coconut sweets, jam, toffee, cakes, ice-cream and even pickles. The trip inspired one of her best-selling products — the turmeric-coconut pickle.

After she came back to Assam, she began to share her learnings with several other women, mostly homemakers like herself. These classes were conducted regularly in collaboration with the CDB. This helped her sustain through difficult times.

Until 2012, she would also submit articles to Assamese magazines such as Nandini and Sakhi that primarily catered to women. Here, she would share tips on how one could cook a delicious meal on a budget while also sharing her recipes. She was also working towards developing Prakrity as a brand and formally registered it in 2015. Her products have FSSAI certification.

Delicious Pickles from her Home Kitchen

Dipali says that her kitchen at home is the centre of all activities for Prakrity.

She doesn’t have a set recipe for any of these pickles and often improvises. The packaging, too, happens at home. She has gotten several labels printed out, and bottles are sourced from a vendor. There is also a sealing machine, and Suditree helps her with the operations and increasing Prakrity’s social media presence.

Other than that, Dipali says that participating in expos and exhibitions has helped her reach out to several people, some of whom are loyal customers now.

Anuj Yadav, a software engineer based out of Guwahati, discovered Prakrity at an exhibition at Maniram Dewan Trade Centre in December last year. The 40-year-old was first attracted to the unique toast pitha and decided to buy the chicken and fish pickles as well. Now, he is a regular customer of these two pickles and occasionally orders others such as the sweet mango pickle and the turmeric-coconut pickle.

“The best thing about these pickles is that they taste like homemade ones. What happens with many store-bought pickles is that they are oily and spicy. But Prakrity’s pickles are nothing like that. These taste simple, delicious, and I love eating them with rotis and paranthas. Their customer service, too, I must say, is very prompt and professional, which I feel sets them apart from others,” he says.

Dipali shares a deep bond with Suditree. The mother-daughter duo has faced deep losses together and has been each other’s support system. Suditree began helping her mother with Prakrity in 2012. Dipali emphasises that it had come as a huge relief to her.

Suditree quit her career as an electronics engineer after working in the telecom sector for two years after she graduated in 2015.

“As I am technically more skilled, I am helping out my mother managing the brand on Facebook and Instagram, and growing the business online. This is helping us spread the word about the brand,” says Suditree who works as a freelance digital content writer.

Suditree also runs an e-commerce website (with a friend) that specialises in selling products (including Prakrity’s) from the North-East.

The versatile 27-year-old does all the photoshoots of the products and has been closely watching her mother make these pickles by hand.

Dipali’s entrepreneurial journey, like many others’, has been anything but a piece of cake. Setting up a business in personally turbulent times is commendable, and after overcoming those obstacles, she shares with us a few challenges she had faced.

“Since there aren’t too many people involved in business operations, it becomes very hectic. But, in this entire process, my daughter has been super helpful. I feel like she has been one of my biggest rewards,” says the proud entrepreneur and mom.

Suditree, on the other hand, is deeply inspired by her mother. “Because I lost my father at an early age, I was with my granny and my mother. I have seen my mother struggle and how she has managed everything. From taking care of me to doing all of the housework and juggling the home business, she has been exceptional. Her hard work has been a lesson, and from her, I have learned to build confidence and never give up,” she shares.

Having grown because of her challenges, Dipali also has a few words of wisdom for home entrepreneurs like herself.

“The best advice I can give is to follow your pursuits relentlessly. Your products should have value, and you must be brave to fulfil your dreams. Don’t care about what others think, and you may not be able to make a lot of money in the early days. But work on building a name for yourself. They should know you for the work you do,” she says.

So, what lies ahead for Prakrity and Dipali?

Dipali says that she is looking forward to introducing some new pickles. She is currently working on developing a new recipe for a sweet amla pickle while also working towards making a fresh batch of mushroom pickles, as there is a good demand for that.

“I have been fooled and cheated several times, but my hard work has helped me land on my feet. I want people to be inspired and understand that with persistence and honesty, one can achieve anything. And I want to make Prakrity a well-loved household brand of pickles,” she signs off.

* Before this interview, I was ____…
Ans: in my vegetable garden picking kosu xaak (Taro root leaves) to make a delicious sabzi during lunch

* A message for your past self about small businesses
Ans: Seize every opportunity that comes your way

*Best advice you ever got is ____…
Ans: to pursue my passion and creativity in earnest.