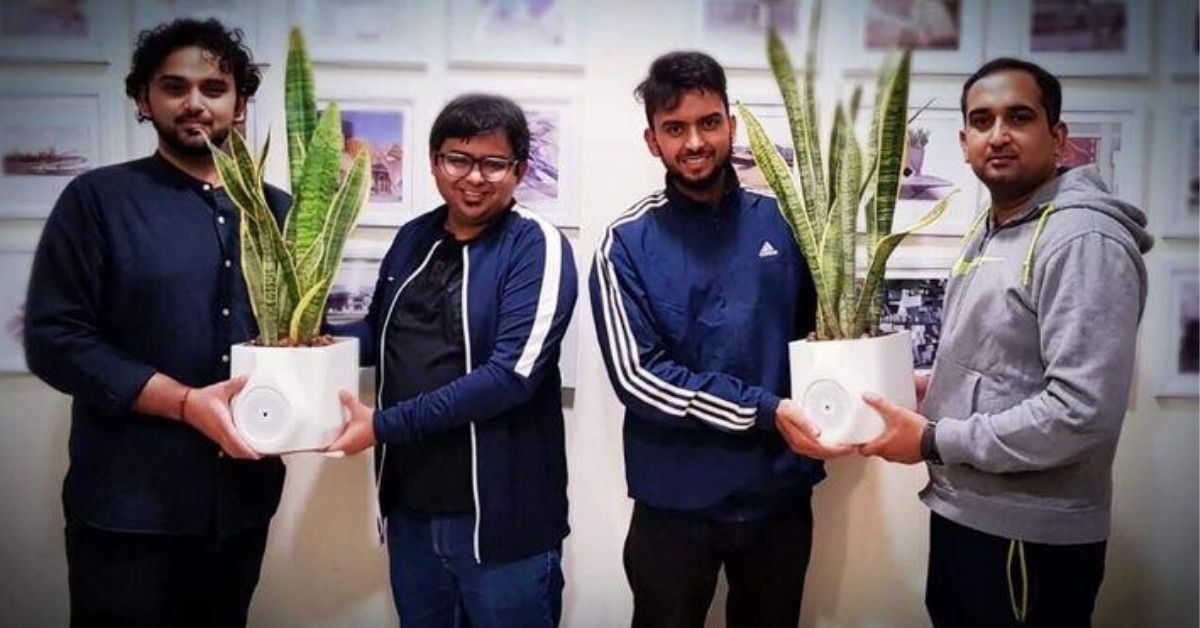 Built by a Delhi-based startup, UBreathe is smart flowerpot that amplifies the natural air purification process present in plants.

Rapid industrialisation has polluted three essentials that are absolutely necessary for us to survive — the food we consume, fresh water, and the air around us. There are many solutions for two of those – including things like water purifiers, eating organically grown consumables, or growing a kitchen garden. But there are very few real solutions for the air we breathe. Even the ones that do exist are usually expensive or slow.

But, new ones are being created all the time. And there is a growing focus around long-term fixes, rather than bigger and bigger filters over our faces or windows.

One such idea to improve the quality of the air in urban settings is by an alumnus of IIT Kanpur. He has invented a ‘Smart Bio-Filter’ flowerpot named ‘UBreathe’. This amplifies the natural air purification process all around us.

“Air-purifying plants absorb air from the atmosphere, which goes to the root zone where the pollutants are purified. The oxygen that is generated is expelled by the plant. But, this process is slow as the flowerpot constricts space for supplying air,” says Sanjay Maurya, the co-founder of UBreathe.

Here’s how he’s fixing this problem.

Two years ago, Delhi faced a serious pollution crisis. According to various news reports, the levels of harmful gases and pollutants in the atmosphere were 20 times higher than the safe limits issued by the World Health Organisation.

There were several causes for this – the growing volume of vehicular traffic, industrial development, the burning of crops and waste, and the burning of firecrackers during festivals.

People living in the entire National Capital Region were forced to wear masks, and make drastic lifestyle changes such as following an odd/even driving scheme to ensure pollution levels were kept under control.

Sanjay Maurya, a Mechanical Engineering graduate from IIT-Kanpur, was pursuing his MBA at the Faculty of Management Studies, University of Delhi.. He wanted to find a solution that allowed both households and commercial establishments to purify the air inside their walls at least.

“I connected with some colleagues of mine from a startup where I worked briefly, and I reached out to some seniors from IIT Kanpur. Together, we conducted basic ground research and realised that the only air purifiers available in the market were natural plants or artificial systems that were expensive,” says Sanjay.

Additionally, he mentions, one plant can only purify a limited amount of air. If a resident wishes to purify polluted air in a regular-sized room, within a few hours or minutes, they would need a minimum of 10 plants or more.

This brainstorming led them to develop UBreathe, a smart bio-filter that combines air-purifying plants with technology to amplify the output of purified air.

About UBreathe and How it Purifies Air

UBreathe has three components: The plant, a smart flowerpot, and microbe-enriched soil.

The flowerpot is powered by residential electricity, and the air is filtered by a method known as ‘bio-filtration’. Air from the surrounding is absorbed by the plant and is pushed into the soil where the root zone takes care of suppressing the pollutants and also exhales clean air. Once this is done, the UB unit discharges the clean air through an outlet.

“The smart flower pot does not have any extra filters, but simply amplifies the purification process. There is an axial fan which creates a suction pressure inside the flowerpot, and releases purified air, formed at the roots, through the outlet at a faster pace. To ensure that the purification at the roots happens faster, the soil is enriched with additional microbes, a secret concoction we have, that breaks down the pollutants,” says Sanjay.

During testing of the device under lab conditions, it was found that air filled with Particulate Matter 2.5 (pm 2.5) at the level of 220, reduced to a level of 20 within 15 minutes. The Air Quality Index also improved from a staggering 285 to the safe-level of 30 within 20 minutes.

“There are five varieties of air-purifying plants we have tested with, and all of them are grown in our in-house nursery located at Gurgaon. The one we usually recommend to most users is the Dracaena Trifasciata, also known as the snake plant, which is easy to maintain,” says Sanjay.

The number of plants required in one more depends on the size. But one UB unit is sufficient to purify air within 15 mins in a 200 sq ft room.

The consumer need not water the plant regularly as there is a built-in water reservoir with a capacity of 150ml which is sufficient for one month. Sanjay says that the device supplies water to the roots whenever it gets too dry.

Nidhi Gupta, a resident of Delhi, purchased the unit in 2019, after her four-year-old son started facing breathing problems from using artificial purifiers.

“Before switching to UBreathe, I was using some artificial air purifiers made by some international brands. That made my home feel so artificial that when I stepped out with my son, he would immediately feel uncomfortable. To a certain extent, I would feel the same way. So, we started growing air-purifying varieties of plants inside the house, and on the balcony. But, I knew this was not enough! After seeing an advertisement about this product on social media. I spoke to the founders and was convinced. Last year I purchased one, and at the beginning of this year I got two more. Not only does it keep the house clean, but also looks aesthetically pleasing,” she mentions.

The device is priced at Rs 5000 and is currently sold only in Delhi-NCR as the team is still working on solutions to transport the unit along with soil and the plant, across India. If you are in this region and wish to purchase the product, you can place an order here.

If you wish to get in touch, reach them at sanjay@urbanairlabs.com