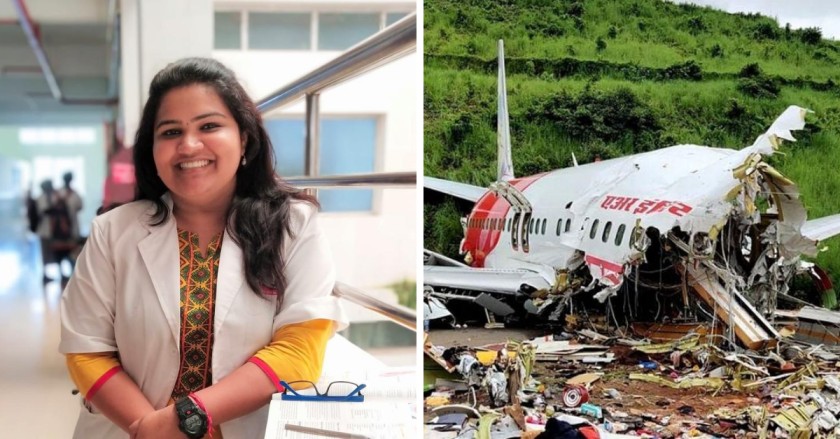 Dr Sharanya R. K., one of the junior doctors who treated the victims of the Kozhikode plane crash shares her experience with us.

“They needed all hands on deck. And without a second’s delay, I changed and left for the hospital. The sight when I entered the hospital was so overwhelming. The patients hadn’t arrived yet but the preparedness and the dedication of the team of doctors just shook me,” Dr Sharanya R. K., a junior doctor who treated the victims of the Kozhikode plane crash penned down in an emotional Instagram post.

On Friday night at around 7.40 pm, an Air India Express flight carrying 190 people from Dubai failed to make a landing on the runway at the Kozhikode airport and fell into a 35-feet valley splitting into two. Sixteen passengers lost their lives, along with the pilot and the co-pilot.

The Better India (TBI) got in touch with Dr Sharanya (24) to talk to her about her experiences of that fatal night.

Rushing to the Hospital

Dr Sharanya worked at the Kozhikode General Hospital for a year and is currently preparing for her NEET exams.

On receiving the news from her former colleague, Dr Sharanya immediately left for the General Hospital.

“I only had one year’s experience but when I heard the news, I knew I had to be there to do whatever I can. I immediately left home. On reaching the hospital, I quickly donned my PPE and reported to my seniors. What I saw was absolutely surreal. The patients had not arrived yet but a team of 25 doctors from all departments including ophthalmology and ENT doctors stood there in absolute silence in their PPEs ready to take on the worst,” she tells TBI.

“I was put in charge of triage which meant that I would be the first person to see the victims as they reached the hospital and I would have to stabilise their conditions before they entered the operation theatres. When the first victim arrived, I saw that he had fractured legs, hands and spine. But the local people who had transported him to the hospital had already stabilised him using cardboards and whatever other material they could find. That was so heartwarming to see. The people had done whatever they could even with the little knowledge they had in the area. As a result of their quick action, the victim’s injuries had not worsened,” Dr Sharanya explains.

Dr Sharanya goes on to explain how people who had heard the news started lining up outside the hospital amidst the rains to donate blood to the victims amidst the heavy rains.

“It was easily 1 am by then but people kept lining up outside. They didn’t know the blood groups, they didn’t know if it mattered, but they still came forward. Whatsapp groups were flooded with pictures of the victims and people were doing their best in every way possible to identify them and the situation they were in,” she adds.

“Everyone at the hospital including the nurses and other staff was on their feet and vigilant. I was so proud to be a doctor and to be in that line of work. The dedication from everyone’s side helped us handle the horrific situation a little better. This year has been so overwhelming for us but what from my experience I’ve learnt that with kindness in our hearts, there’s nothing to be afraid of,” she says.