MY VIEW: 5 Life Lessons I Got From Piku

The release of 'Piku' has stirred many dominant emotions in the people of India. Suddenly there seems to be a wave vocally declared opinions, which were felt before, but never spoken out loud. Through Piku, India is learning life lessons.

The release of ‘Piku’ has stirred many dominant emotions in the people of India. Suddenly there seems to be a wave vocally declared opinions, which were felt before, but never spoken out loud. Through Piku, India is learning life lessons.

It indeed is a blessed time for the world of Hindi cinema, where the new breed of female actors of the likes of Deepika Padukone are not thinking even twice before stepping out of their comfort zones and dabbling in various social subjects. ‘Piku’ is one such significant milestone in the world of Hindi cinema, where the story of the amazing chemistry between a father and a daughter has been told in such a nice way that the rug that has been woven out of it showcases amazing tapestry. Piku, along with being a critically acclaimed film, has also been a resounding commercial and has, undeniably, provided us with valuable lessons of life. So, here are the lessons that I learnt after watching Piku:

1. A father CAN have a conversation with his daughter regarding sexual intercourse, sans inhibitions When was the last time that a father talked about the sexual life of his adult daughter in a deadpan manner? Perhaps never in the history of all of Hindi cinema or, for that matter, in any kind of cinema, has a father been seen to be talking about such matters as it has been done in Piku. In what seems to be a bold step forward, the director Shoojit Sircar has deconstructed the notions associated with sexual preferences and has tried to highlight the fact that a healthy indulgence in sexual activities is also an important part of the growth process of an individual. He has, in fact, in a subtle manner also tried to deal with the ‘deathblow notion’ of the loss of virginity of a female and has used the support of a father, in the form of Big B, to underline his point. Sex is a need, rather than being something else as it has been construed to be, and the way it has been dismissively expressed in Piku, makes it a watershed film. In our zeal to ‘grow up’ we often forget our native roots and become shoots without any identity. If one wishes to have an identity and a source of strength, one needs to return to one’s roots which could be anywhere, but it is imperative that the memories associated with growing process be revisited. Association with roots manifests itself through the songs of Big B and Deepika Padukone in the native language of their characters, wherein they drop their inhibitions and dance. Such a scene underlines the fact that one should continue to maintain links with the music and other forms of expressions of their culture, because such expressions have a sense of richness which defines and adds, as they say, ‘the tadka of sarson’ or the tangy mustard to life. Sircar also emphasized upon the importance of association with the roots through the sheer joy of Big B’s character on receiving his favourite newspaper from his native place, one month after its publication.

3. Travel and Explore the World, especially with the Elders It has always been said that we tend to re-discover our self if we move away from the structured existence that we have adapted our self to and, it is these deviations which bring a different perspective to our entire existence. It is important to travel with the elders as they tend to drop their natural reticence and regale one with the memories from the past that could then become a part of one’s memory for times to come. Sircar portrays this through the beautiful character of Big B who opens up once the travel to Kolkata becomes a reality.

4. Children must make Compromises in order to take care of the Elders

There is a scene which depicts Piku dropping all her tasks, even though in a meeting, because a call arrives from her father, regardless of the fact that they both share a bitter relationship and there is no indication of love in it. The care, which seems to stem from its ideation to fruition, is what drives the new expression to their relationship. Piku provides a fresh insight for the present generation into the line of sacrifice between blossoming careers and time with the parents.

Piku also has created a new benchmark for a mother-son relationship, which has been treated like an iron fist in a velvet glove. Here is a mother-son duo who is at loggerheads with each other, owing to a mother who is more concerned about her daughter than her son, because the daughter is a divorcee. Such a situation is indeed becoming a way of life in India of late, where both the relationships – of a son with his mother and of a daughter with her father – feel pangs of frost bites in them.

5. When Shit Happens, It Has To Be Deconstructed 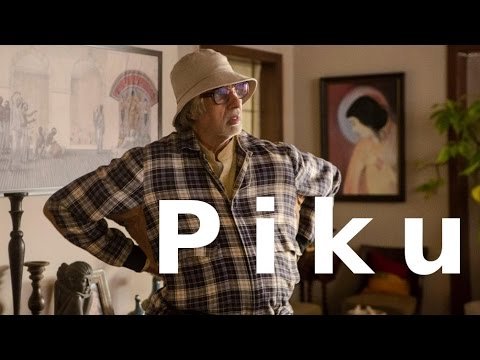 The essential theme of Piku is associated with the perfect bowel movements that one aspires to have and, even though in the movie Bengalis talk about it with gay abandon, it is not that only they suffer from it. Others also suffer in the same manner and must talk about it in the same way as well. After all, “aadmi ka emotion uske motion se juda hua hai” (a man’s emotion is linked to his motion).

Piku is a film which urges us to take life with ample dollops of levity and helps us view life in a lighter vein.