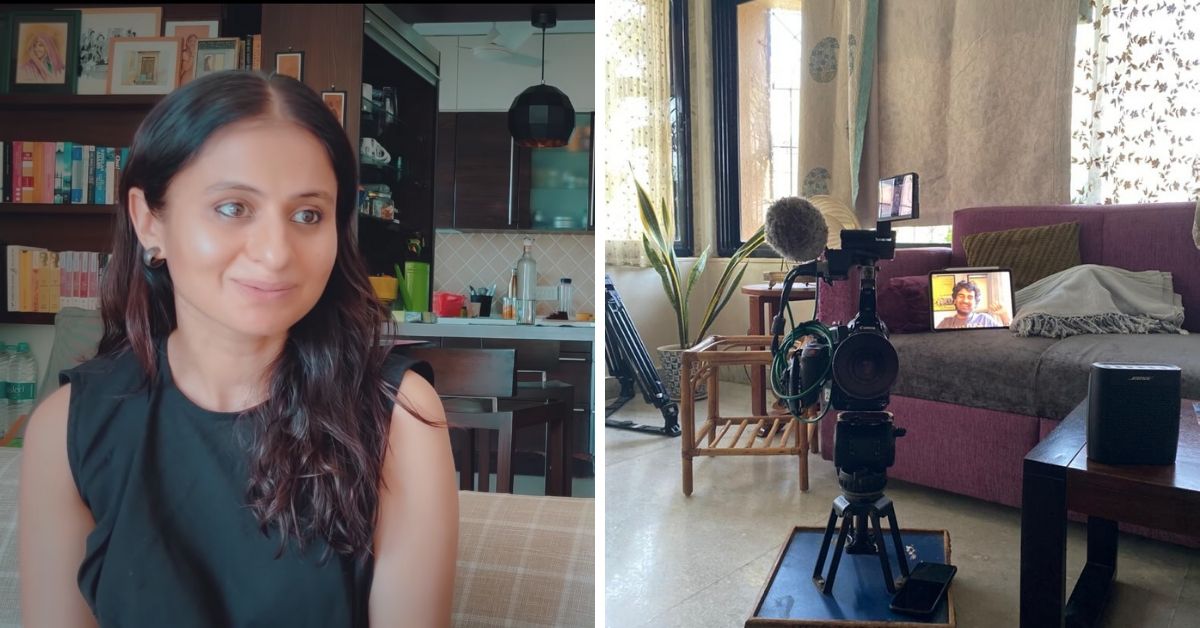 Using everything from video calls to making actors set up their own shots, here’s how creativity kept the ball rolling.

“The only way of discovering the limits of the possible is to venture a little way past them into the impossible.”
-Arthur C Clarke, British science fiction writer

Over the last few months, the entertainment industry has come to a standstill. But Coronavirus-related restrictions have also compelled young filmmakers to shoot in closed spaces by casting their closed ones, friends, and even professional actors. They embraced the lockdown constraints as creative choices, right from writing the screenplay to shooting the film.

The release of the anthology film Home Stories, available exclusively on Netflix India’s YouTube Channel; Banana Bread, a short film by Srinivas Sunderrajan; and Love In The Time of Corona, an experimental visual essay by filmmaker Anirban Dutta, speaks volumes about this tricky new process of shooting and structuring films.

Conflicts and complexities of existence

Out With It, featuring Arjun Mathur, delves into the psyche of an agoraphobe, who refuses to leave the protective confinement of his home during the pandemic, having to confront his worst fears.

Will You Be My Quarantine, featuring Saba Azad and Imaad Shah, narrates the fates of two individuals whose rendezvous for a one-night stand turns into a three-week standoff due to the lockdown.

Delivering Smiles, featuring Tanmay Dhanania, depicts the tale of a delivery executive, who records his food delivery journey to customers, in the form of Vlogs, during the problematic situation.

Web Ne Bana Di Jodi, featuring Veer Rajwant Singh and Apoorva Arora, among others, sketches the knotty onus of a couple getting married during lockdown, while trying their best to go through the ceremonies of an online wedding.

Sahirr Sethhi, the director of Out With It, is an Indian filmmaker and commercial director, screenwriter and producer based in Los Angeles and Mumbai. Graduating from the film direction program at University of California, Los Angeles (UCLA), he won a Student Emmy for his short-film Zoya. During the pre-production of Out With It, he was aware that he had to direct the film over video chat.

So he began by breaking the script into simple beats that would be easy to communicate and execute. He went through multiple drafts with his co-writer Kaivalya Kulkarni to develop the characters, create a structure, and layer the film with metaphors and misdirects. He put together an elaborate look-book with paintings by artists like Edward Hopper and Salman Toor and stills from various films to convey a sense of claustrophobia and isolation.

The protagonist, Arjun Mathur, got on board enthusiastically and agreed to film in his apartment, knowing well that he would be multitasking while acting.

He says, “My experience as an assistant director helped me during the shooting. The limited crew with their varied skills had to come together. Moreover, since the shooting was taking place in my home, a space I am aware of, I was taking instructions from the director, and also actively involved in the process of storytelling.”

The cinematographer, Jay Oza used his iPad to be on a continuous video chat with Sahirr. He would use the iPad’s front facing camera to mimic the main camera’s POV (point of view) so Sahirr could block the scenes. Following this, Arjun would set up the main camera and show the final frame to Sahirr. When ready for the shot, Jay manned the main camera, while the iPad would be placed in front of Arjun, so that Sahirr could direct his performance.

Tiya Tejpal, the production designer, arranged the next set. For instance, while a scene was filmed inside the bedroom, she would set up the scene where Arjun’s character was solving the puzzle.

The process involved a lot of coordination, patience, and trust. Other actors who appeared in the film, self-shot their scenes on personal devices while the director guided them over video chat.

The post-production was also done remotely. The editor, Utsav Bhagat, used a screen-share option to show the director his timeline. Neel Adhikari, the composer, discussed music ideas before filming and created a scratch track that was played on set to inspire the pacing. It was even used in the first cut.

Sound designer, Soutrik Chakrabarty, had to send exported files constantly, so that the post-production team would listen and convey their notes. Colour correction and a little bit of VFX (visual effects) were all done remotely.

The team did not let social distancing norms interrupt the collaborative dialogue between the cast and crew; if anything, the rules helped them to listen and trust each other to elevate the storytelling.

In the words of Sahirr, “While so much is happening around us, our stories go on. With Home Stories, we wanted to push the boundaries for creativity and bring four such short stories, made with love and care at home during this unimaginable time.”

Srinivas Sunderrajan, an Indian musician and an independent filmmaker based in Mumbai, directed the short film Banana Bread remotely. He is known for The Untitled Kartik Krishnan Project (2010), Greater Elephant (2012) and the metafiction web series TXDRMY (2016).

The 12-minute film was co-written by Rasika Duggal and Mukul Chadda, who not only acted, but also shot the entire film. They shared the script with Sharanya, the head at Terribly Tiny Talkies. Sharanya then discussed it with Srinivas, who liked it, despite the challenges with ‘shooting remotely’. There was no cinematographer present during the shooting.

The team first got together through video conferencing to familiarise themselves with one another. In the next stage, the actors got familiar with the technical aspects of shooting. Then followed the sessions of delving into the script and performance, where one-on-one video sessions helped understand the characters’ stories and graphs.

The idea was to invoke the sense and feel of the 70s and 80s films of Basu Chatterjee and Hrishikesh Mukherjee while bringing out the story and chemistry between the two protagonists.

The director decided the frame and provided the actors with a PDF document. So, technically speaking, Srinivas was also the director of photography, while the actors also operated the camera. The film was shot for two days from 10 a.m-4 p.m.

Since the film was shot with natural light, it was essential for the team to find the pockets in the location that had daylight filtering in and avoid places where it was dark, since phone cameras function poorly in such settings. So, a small video recce of the house, where the film would be shot, was done to figure which locations would work best for the scenarios in the film.

After the shooting, the files were all uploaded on Google Drive, which Srinivas downloaded and edited on his home setup. The end credit sequence and poster concepts were discussed with the design team of Terribly Tiny Talkies, who executed it.

Despite overcoming the challenges, Srinivas shares that the process drained him mentally and physically than real world shooting.

A dream-like hold of memory and reality

Anirban Dutta is a self-taught filmmaker. His debut feature film Jahnabi – Personification of a woman as many Rivers was premiered in various international film festivals and received critical acclaim. Love In The Time of Corona is a visually poetic depiction of our current predicament.

Sudeep Sen, the writer of the titular poem, approached Anirban and they discussed a film adaptation. Anirban read the poem multiple times and tried to find metaphorical references. He also spent time scripting the sound design. His idea was that the images and the sound must represent a bold dialogue, somewhat unsaid and unspoken, but thoroughly embedded in the skin of the film.

Besides taking some new shots, he used some old footage, shots which he could not use in his previous films, but felt relevant to the character of the film.

The young director is a one-man crew, who shot, edited and layered the sound design.

Under the present situation, making films and releasing them online or on Over-The-Top (OTT) platforms seems to be a viable option. The release of Shoojit Sircar’s Gulabo Sitabo on Amazon Prime last month, is an example of this new phenomenon gaining popularity in the industry. Unlike Amazon Prime, OTT platform Disney+Hotstar is geared to premiere seven Bollywood movies, which were originally slated for theatrical releases–Dil Bechara, Laxmmi Bomb, Bhuj: The Pride of India, Sadak 2, The Big Bull, Khuda Haafiz and Lootcase.

So, can we consider such options as the future of film distribution?

“Until it is safe to enjoy a collective movie-going experience in theatres again, digital distribution will help make content accessible to viewers in the comfort of their homes,” says Sahil.

Srinivas opines, “I feel the pandemic is a boon to smaller filmmakers because this opens up a door of OTT platforms for distribution, though I would wait to see how the OTT market shapes up as the lockdown is being relaxed. But the notion of OTT being the future of film distribution is stronger now than it was before.”

But Anirban believes, “Given the worldwide health and economic crisis, responsible films should be distributed and promoted with due diligence and credibility. Distributors should find unique, ingenious, non-partial platforms to showcase good cinema. This is needed more than anything else now. As mere creators of art, we can only hope for better days ahead and support each other in this journey.”

(Written by Dipankar Sarkar and Edited by Shruti Singhal)