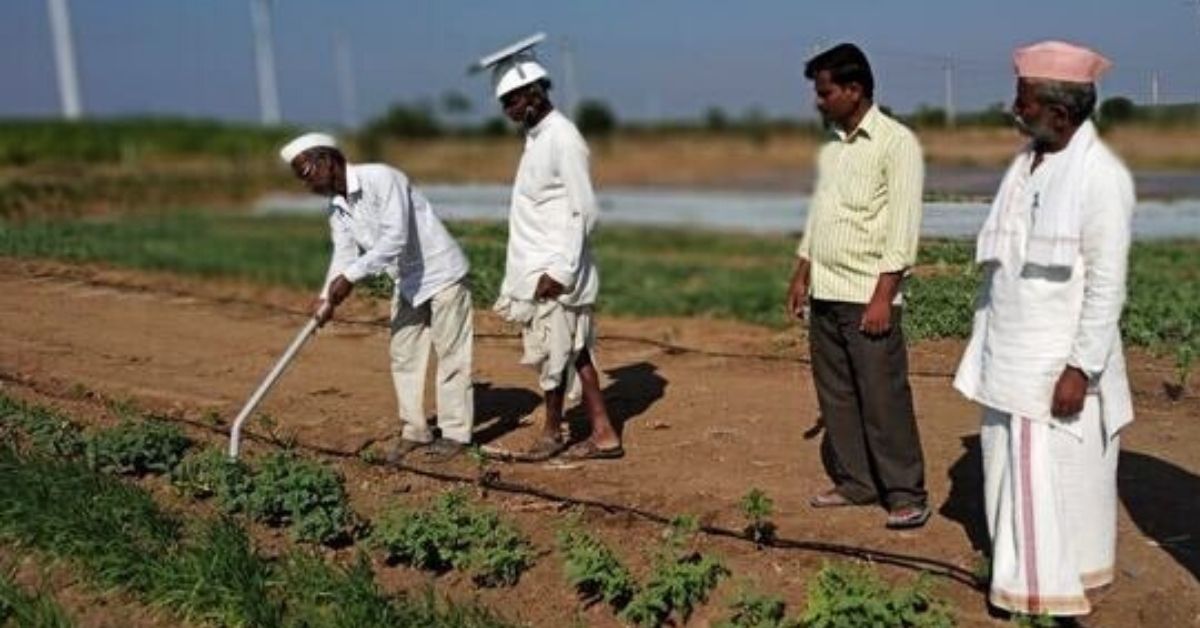 In 2018, Girish Badragond came across two visually-impaired farmers in Vijayapura, Karnataka, who had to lease their lands because they couldn’t farm it themselves.

To make their lives better, Girish created a machine called ‘Blind Farming Technology’. The machine includes a digital stick equipped with a sensor that detects the moisture content, nutrition level, and temperature of the soil. The information is announced on an audio system.

“The farmer can walk around his field holding the digital stick to get updates. Apart from that, the machine includes sensors which are installed under the soil to collect various crop-related information. The audio system is installed on different parts of the farm depending on the size, and it works on solar power. There is also an irrigation system which will automatically water the crops when there is a drop in the soil moisture level. Even in the absence of the farmer, the work continues. This technology will also help the farmer save water,” says Girish, who claims that he developed the machine in only 45 days.

“I come from a farming background and wanted to invent something that would allow visually-challenged people to practise farming. While many of them are employed in various sectors such as education, technology, arts, very few of them engage in this occupation,” says Girish.

Speaking about Sahadev Shinde and Marappa Pujari, the two farmers who inspired him to invent this machine, Girish says, “They had done that because they could not manage the farm themselves. So, I developed the machine to help them. The entire package consists of 16 products including the digital stick, modified irrigation system, bird repeller, and audio systems. There is also an alarm system to prevent intruders from breaking into the field.”

The machine comes in a package that starts from Rs 3 lakh but varies depending on the size of the land, agricultural systems in place, and farmer requirements.

Lending a Helping Hand To Farmers

It all started when Girish moved to his hometown Vijayapura after a few failed partnerships in Bengaluru.

“While working with other companies and partners, I felt that I could never realise my full potential. So, in 2018, my wife and I decided to move back to our hometown. I wanted to spend my time working on my ideas, and make a difference in the community,” says Girish.

Once the machine was ready, he approached Shri Siddheshwar Samaste, an organisation focussed on philanthropic work, developing colleges, and institutions in Bijapur. Through them he was offered 2 acres of land where he could install the prototypes, and train Sahadev and Marappa.

“Initially farming was an impossible task, but after getting training from Girish sir, I am 90% confident that I can be a successful farmer. The technology helps to understand what plant it is, what nutrition is lacking, and when to provide water. Today, with the help of two others, we produce mangoes, chikkos, and bananas on the 2 acre plot. The produce is sold at a local market in Bijapur,” shares Marappa.

Soon after, three visually-impaired farmers from Raichur approached Girish for training to use the technology.

“They did not have land of their own to instal the technology, so they spent a few months in Bijapur working and learning on the demo plot,” says Girish.

That same year, Girish and his wife went on to start their own company Krishitharanga Farm Tech, headquartered in Bijapur. The organization is focused on developing cost-effective user-friendly devices.

“There are eight full-time employees who are involved in Research and Development, but I also take help from engineering students who attend internships with my organisation. I also conduct training sessions, and till date I have taught more than 1500 students. I plan to execute 186 other ideas, but before doing so I am looking for a partner, a like-minded innovator, to invest in the company,” says Girish.

Apart from that he also hopes to start a ‘precision farming’ training centre for the visually-impaired. Here, farmers would be given hands-on training to use the machinery which would prepare them for a career in the agricultural sector.

“I believe that nothing is impossible. In India, there are a lot of talented innovators and achievers but there is no channel for their development. My aim is to keep offering solutions to the society that will change their everyday lives,” says Girish.

Currently, he is working on an innovation that he hopes will be a useful tool in the fight to arrest the spread of the deadly Coronavirus.

“I am working on developing a bed where the sheets are automatically sterilized. Since hospitals are places of high risk for contracting coronavirus, it is important to maintain hygiene in the premises. On the common places where contact is the most are patient beds. Manually changing the sheets puts the cleaner at risk. Hence these beds will be fitted with a UV sterilization box at the bottom, and the bedsheet will automatically move in and out of that box (something like a treadmill). Each bedsheet will take 4 minutes to get properly sterilized,” says Girish.

To know more about the ‘Blind Farming Technology you can contact Girish Badragond at krishitharanga@gmail.com