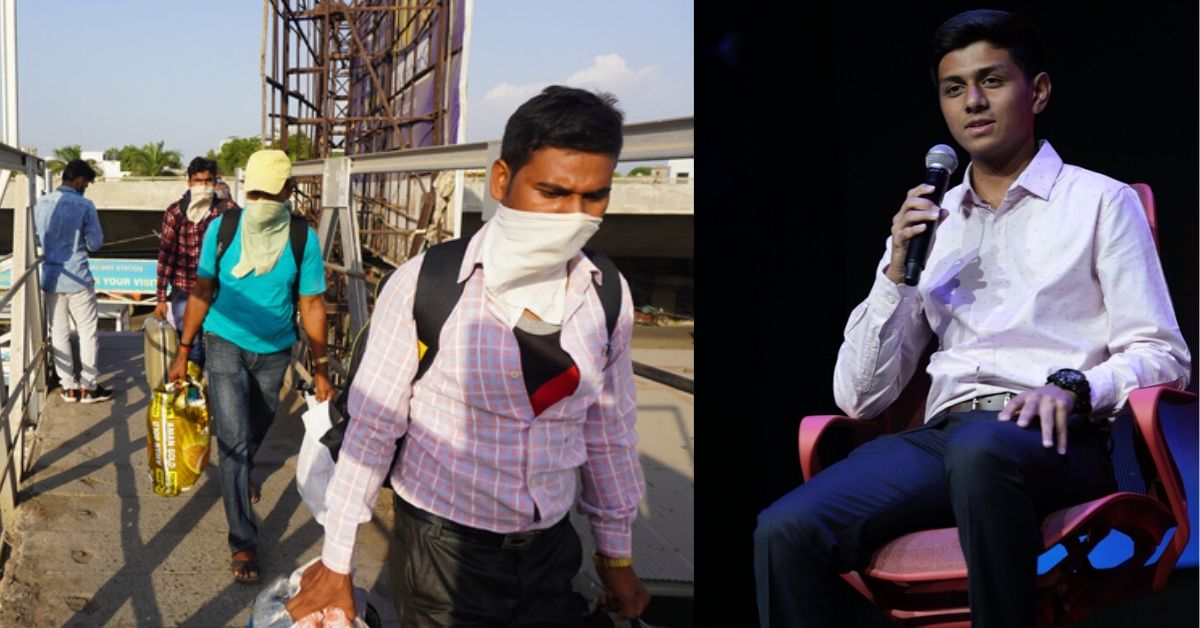 Extending a hand of help to workers who lost their jobs due to the closure of businesses during the lockdown, 17-year-old Akshat Mittal, a commerce graduate from Amity International School, Noida has launched ‘Bharat Shramik,’ a web-based platform that will connect unemployed workers with employers.

“The country is now amidst unlock 2.0 but several businesses, builders, and factory owners are unable to start work. This is because most of the workforce migrated away from the city to their hometowns or villages. Bharat Shramik is an initiative to help these unemployed migrants find jobs in that area,” says Akshat.

How Can Unemployed Workers Register?

Employers who have lost a chunk of their workforce can register themselves on the website.

“On the website, employers are restricted to 20 random results of the workforce they can hire. This is done to protect data theft. If a company wishes to hire in large numbers, we request them to email us at hello@bharatshramik.in, so that we can help them with their requirements,” says Akshat.

He also adds that households who wish to hire one or two workers for day-jobs like plumbing or carpentry can also register themselves on the platform.

The service which was launched on 20 June already has more than 18,000 workers from Bihar, Jharkhand, and Uttar Pradesh registered. Also, more than 120 companies have registered themselves.

The database of workers will also be provided to government agencies to improve their employment schemes based on the displacement of skills that is taking place.

Akshat was inspired to start Bharat Shramik when his 80-year-old grandfather’s driver decided to quit his job and return to his hometown in Bihar.

“Once he left, my grandfather found it hard to get essentials and medicines. Finding a replacement was hard too, the situation was such. At that time, I thought about what his driver would do, back at home, for a monthly income,” says Akshat.

With the increasing unemployment rates and financial distress, he wanted to launch a service where blue-collar workers would come out stronger post the pandemic.

With help from his father, Ashish Mittal,who is the founder of TurningIdeas Ventures, mentor, Ashish Agrawal, the founder of Wesense, tech-support from Mihir Soni, and Atipriya Dev Sinha who helped with website outreach, Akshat was able to execute his idea for a uniform database.

“Akshat is a bright young boy, and his website is timely help for those in need. When he came to me with his idea for the website, he needed help with the technical aspects, and I helped him in terms of setting up the servers, and a database,” says Ashish Agrawal.

Once his website was ready, he approached Knowlarity, a leading communication solutions provider to power his helpline. The organisation has been actively involved in developing COVID-19 helplines for various state governments.

“It was a novel idea coming from a 17-year-old. We decided to accept his proposal, and develop a helpline free of cost,” says Yatish Mehrotra, the CEO of Knowlarity.

But, this is not Akshat’s first entrepreneurial initiative. In 2015, when he was 13, he launched a website called ‘oddeven.com’. It was introduced in December 2015 anticipating the odd-even traffic rule imposed by the Delhi government. The application would match individuals to potential ride-shares or carpools in the same direction as their commute. The following year, his website was sold to Orahi.com, another carpool application.

Akshat’s inspired idea was thanks to the 17-year-old’s awareness of what was happening around him.

“I thought about all those migrant workers who were walking back home. What would they do for a living? I realised India’s skill map was re-shuffled,” he mentions. With this site, here’s to hoping that some of them can find jobs again.