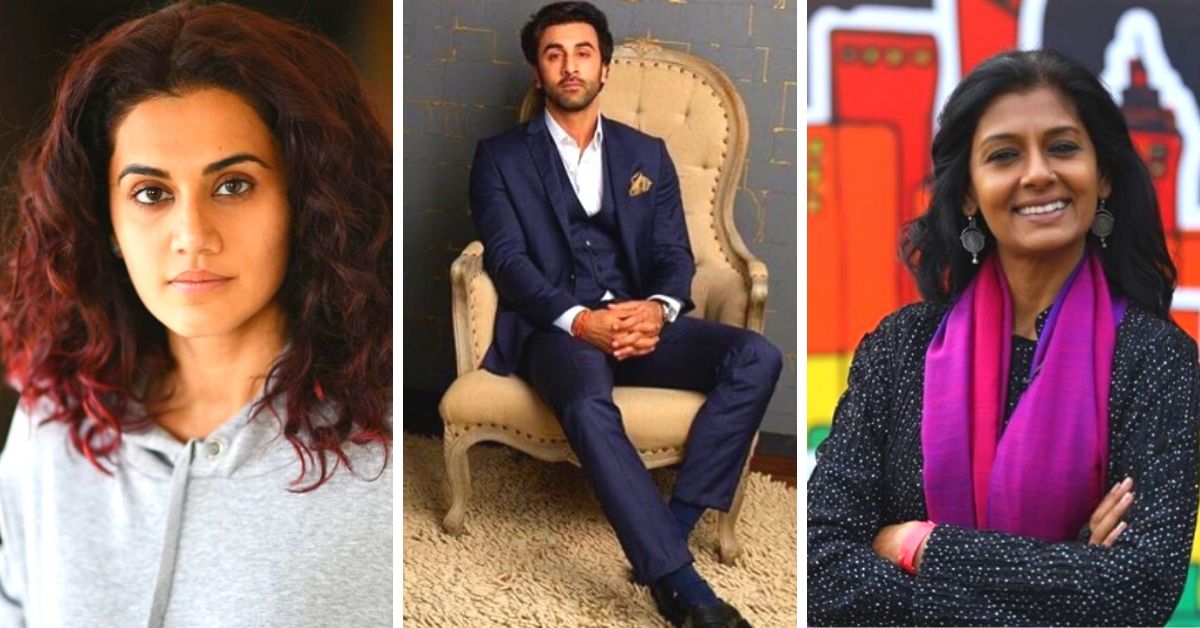 From something as simple as refusing a fairness cream ad to pulling out of an event sponsored by a brand that promotes ‘whitening’, these ten celebrities condemned colour-based discrimination with their actions.

‘Black Lives Matter’ protests broke out across the USA last week after a Caucasian police officer’s action resulted in the death of a black man, George Floyd. Floyd’s death is widely-attributed to racism in America, which has seen hundreds of such cases over the decades.

These protests slowly spread to other countries like the UK and Australia.

Meanwhile, in India, after many celebrities tweeted their support for ‘Black Lives Matter’, the widespread colour discrimination that exists in India took centre stage.

However, the condemns and appeals backfired, especially in cases of those who had endorsed fairness creams in the past. Many pointed out how celebrities with a huge fan base were setting wrong examples by promoting a change in skin-tone if you are dark.

Actor Abhay Deol too called out actors for their ‘wokeness’ in a series of Facebook posts highlighting the taglines of beauty products which include ‘white glow’, ‘fine fairness’, and so on.

“Fairness creams in India have evolved over the years, from being fairness creams to now using euphemisms like “skin brightening/ whitening”, or “lightening creams”. Most brands no longer want to be associated directly with being termed as ‘fairness creams’. So now we have brands selling “HD glow”, “White beauty”, “white glow”, “fine fairness”, and so on,” he wrote.

India’s obsession with fair skin has prevailed for a long time (some even call it a colonial hangover). The widely held belief that beauty is directly proportional to how fair you are is reiterated through customs, matrimonial ads, beauty product ads, and films.

In fact, one of my colleagues at The Better India narrated how she was asked to stand in the last line of her school choir when she was barely ten because of her skin colour.

So, how does one get rid of the deep-rooted mindset without witnessing a brutal attack like the one in Minneapolis? Does India too need its own ‘Black Lives Matter’ to awaken the masses?

Probably one way to start is by standing up against skin-toning endorsements considering India’s fandom with celebrities. Something as simple as refusing a fairness product ad will send out a strong message to millions of Indians who look up to celebs.

And this isn’t to imply that no actor has spoken against the blatant privilege of fairness.

Here are ten Indian actors who stood their ground and refused to propagate that having a fair skin is a gateway to success and emphasised that all colours are equal.

Indicating that actions speak louder than words, one of the reigning superstars of our country, Ranbir Kapoor, reportedly refused to collaborate with a fairness cream company. Though he did not openly make any statement against fairness brands, he let his action do the work.

He turned down an offer of whopping Rs 9 crore for a day’s shoot as per the report.

This was at a time when the actor had already established his position in the film industry. He could have taken the offer but he stood for what he believed.

She is one of the rare actors who does not mince her words and stands for what is right. Among all her fearless opinions, an event in 2017 won many hearts. The actor pulled out of an event as soon as she realised that it was being sponsored by a fairness brand.

“I agree it was a last-minute call, but when I found out that I would have to pose at the event with fairness brand in the background, I decided to take my name off the event. I have actually lost quite a few films because of being fair, so I will not propagate fairness in any way,” she told Hindustan Times.

Ironically, the event in Jaipur was about propagating women’s rights!

When successful actors think twice about their brand image or rubbing big companies on the wrong side, Kubbra Sait does not shy away from being vocal. 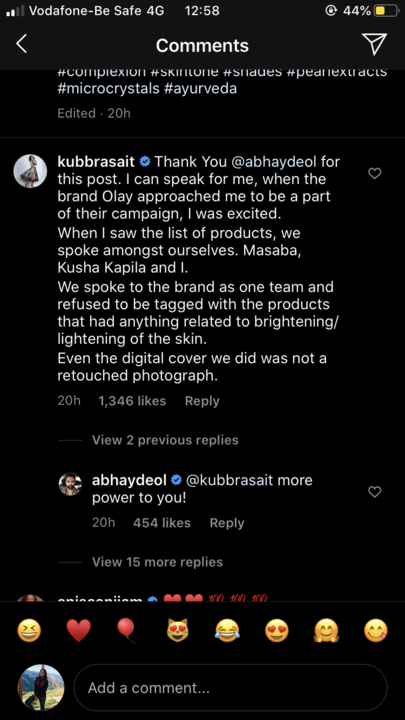 Known for her role in Sacred Games, this fairly new actor, not only openly refused to associate with a product but also used her position to bring about a change. She refused to retouch her skin while shooting for an ad.

Reacting to Abhay Deol’s post, she commented, “I can speak for me. when the brand … approached me to be a part of their campaign, I was excited. When I saw the list of products, we spoke amongst ourselves. Masaba (Gupta), Kusha Kapila and I. We spoke to the brand as one team and refused to be tagged with the products that had anything related to brightening/lightening of the skin. Even the digital cover we did was not a retouched photograph.”

Actor-director Nandita Das has been known for criticising Indian’s obsession with fairness. Time and again, she has called out the film industry’s pre-conceived notions about having a fair person in the lead role.

“When there is a role of a rural woman, or a Dalit woman, or the role of a slum-dweller, then my skin colour is fine. But the minute I have to play an educated, upper-middle-class character, invariably someone comes up to me and says ‘I know you don’t like to lighten your skin, but you know this role is of an upper-middle-class educated person’,” she says.

Several years ago, Nandita Das launched a campaign called ‘Dark Is Beautiful’ to end prejudices against dark skin colour. She even came out with a 2.5-minute powerful video titled India’s Got Colour.

Kalki Koechlin is another actor known for her unconventional roles and outspoken public presence.

When a fairness brand approached Kalki, she turned them down as she believes that beauty is not to be associated with skin colour.

“I don’t think there is anything wrong with being fair, but it has become such an obsession in our country that it is all we look for in beauty. There are so many stunning people who are dark-skinned and it should be celebrated. I would love to have a product that makes me darker,” she told Hindustan Times.

Making jokes or passing casual remarks about issues that affect our society is not okay. It is important to understand that one cannot get away with racist comments in the name of humour. It is important to point it out and the ensure is not repeated and that’s exactly what actor Tannishtha Chatterjee did in 2016.

She lashed out against a comedy show called Comedy Nights Bachao, which airs on Colors TV, after being at the receiving end of racist jokes about her skin colour.

“I was actually looking forward to be roasted… the only thing they could roast about a dark-skinned actress was of course her dark skin. They could identify me only with that. I could not believe I was sitting in a nationally televised comedy show in 2016 in Mumbai amid such regressive (I can’t call it humour), and blatantly racist content,” she wrote.

“Even considering that dark skin is a joke comes from that very deep prejudice. And I tried to explain why this is not personal and it is a larger issue about what our mindset is. And why cracking jokes about deep biases in our society is irresponsible. And that it is not a question about apologizing to me, but propagating this idea and continuing with this mindset in the name of comedy is what is hugely problematic, specially because it is a popular show on a nationalized Chanel,” she added.

“This is Indian colour. We can’t go to foreigners and ask them why they’re white, and if they know that they will get cancer because of it. We can’t look at them and think we want that. That’s their skin colour and this is ours. Africans have their own colour too and they are beautiful,” said South Indian actress Sai Pallavi on rejecting an ad to promote a fairness cream.

Pallavi, who subjected her sister to eating certain fruits and veggies to get a ‘fair complexion’ in her childhood, rejected a Rs 2-crore advertisement, thus putting a strong message in south India’s film fraternity, where white skin is an obsession.

“I’ve tricked Pooja (her sister) several times. She liked cheeseburgers and had a complex that she wasn’t as fair as I am. When we stood in front of a mirror, she would look at my face and then at hers. I noticed this several times. So I told her that if she wanted to become fair, she should eat fruits and vegetables. And she did. She doesn’t like fruits and vegetables at all but she still ate them because she wanted to be fair. I felt very bad about that, the impact it had on a girl five years younger than me,” the actor said.

The singer shared how she had stood her ground against launching a baby care product around fair babies when she was working as a brand manager for a leading FMCG firm.

“Many years ago when I was a brand manager for a leading FMCG firm that was on the verge of launching a new baby care range, once again the positioning idea for the brand’s campaign that was being presented most strongly by the consumer research teams was around ‘fair babies’. I remember putting my foot down and refusing to sanction that campaign despite a lot of people in the team trying to convince me about how we need to give the consumer what they want and that it was my job to be most concerned about the best business and most money that the company could make. Truth is there is something called corporate responsibility and even individual conscience and consumerism cannot fuel all our decisions,” she said.

It is not easy to sail against the tide in our film industry but Anushka Sharma has always taken the unconventional route. When it came to the topic of fairness cream, she did not back step. Instead, she admitted that she would never promote such products.

When actor Sonal Sehgal shifted to Mumbai to act in the glamour industry, she was a part of an ad for a fairness cream. She took up the ad that paid her house rent. However, soon she realised her problematic decision after her domestic help asked her which cream would make her look fairer.

“I suddenly understood that I had failed Gangu (domestic help) and millions of gorgeous, dusky women across the country, including my own sister, by becoming a part of the mafia that undermines their self-esteem,” she told The Logical Indian.

After working in a few films, she went to New York and studied filmmaking, but the domestic help’s question never left her and on her return, she made a short film, ‘Dancing In The Dark’. The film exposes the fairness cream market and its prejudices against dark-skinned people.

With these Indian actors publicly questioning the implications of unhealthy colour obsession and skewed notions of beauty, there is a way to educate people and bring about a change.

It is high time we cut out the racism that all of us are a part of.