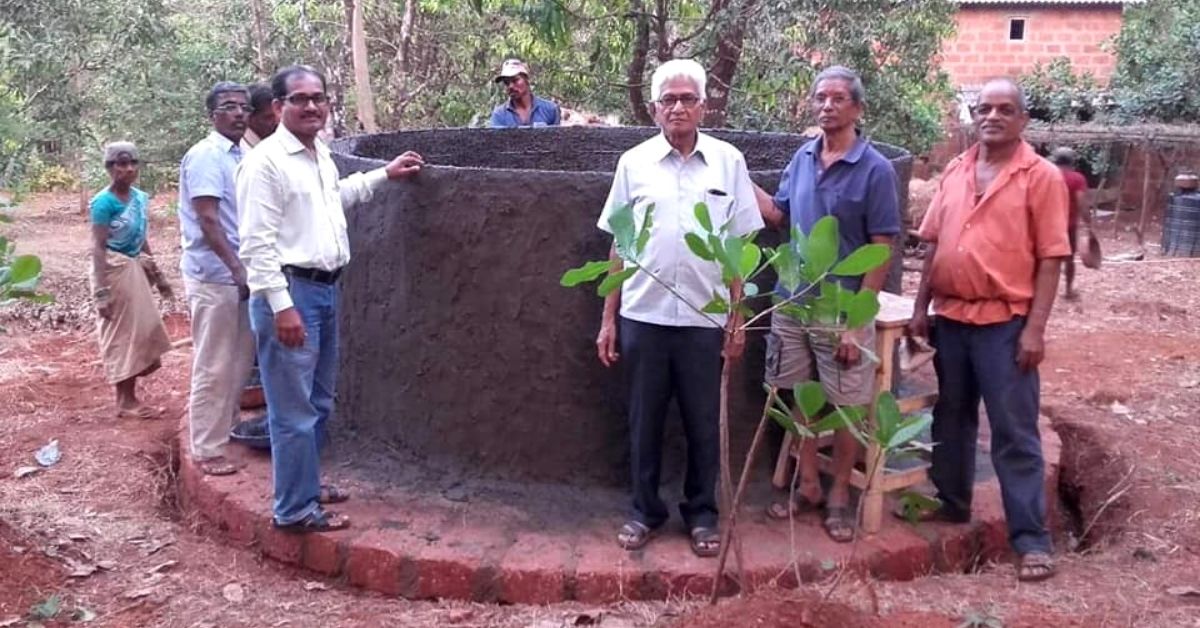 Ulhas Paranjpe has a simple question to ask—”If a Mumbai citizen & industries can get enough water all year round, why can’t a farmer?”

Ulhas Paranjpe, a civil engineer from Mumbai, would visit Ratnagiri, a port town on the Konkan Coast, once every year. His relatives owned several acres of land in the area, and he found it refreshing to be in the midst of nature, away from urban life.

During one such trip, Paranjpe observed that the fields in the area were completely devoid of crops at the time of the year when he was there, and decided to ask his cousin why.

“I kept asking him the same question, almost like a playful taunt. He heard me out twice, thrice and then lost his patience and said, “You are a civil engineer, why don’t you give me water all year round for my crops?” Paranjpe shares with The Better India (TBI).

That question, or rather, demand became the driving force of Paranjpe’s career. It got him thinking of how his engineering degree could help farmers get access to water throughout the year. After careful study of India’s climate, Maharashtra’s topography and the systems currently in place, he concluded that rainwater harvesting was the way to go.

Since 2003, through their trust, Jalvardhini Pratishthan, Paranjpe and his family have been working tirelessly to bring rainwater harvesting systems closer to farmers and Adivasi tribes of Maharashtra. As of 2020, they have successfully built over 350 such systems in 17 districts and taught its principles to thousands of others.

In a conversation with The Better India, the 72-year-old shares why he thinks this water conservation method is the future of agriculture.

Even though the Konkan strip and other parts of Western Maharashtra occupy 10 per cent of Maharashtra’s land area, they receive about 46 per cent of the state’s total rainfall. Agriculture is one of the two primary occupations of the region, and hence, one can estimate how crucial freshwater is to the residents of Konkan.

However, most of the water that the rains bring gets washed away into the sea, leaving nothing for the farmers to fall back on if the following months are harsh.

“Many farmers thus can utilise just four months of the year for their crops. They sow seeds in the kharif season but cannot utilise the rabi season given the scarcity of water in those months. If the 1.84 crore people sitting in Mumbai can have easy access to water all year round, why can’t the same be true of the farmers in rural areas?” Paranjpe questions.

Water storage in rural or urban areas is usually synonymous with bores or wells. Rainwater harvesting systems are rarely the instinctive answer. But maybe that’s where we are going wrong.

“Rainwater harvesting is hardly a new concept. It has been a norm in many countries, including India, for thousands of years! However, with age, water increasingly became the responsibility of the governing authority and less of the community. This made us forget the power we have right on our rooftops, agricultural lands and such premises,” argues Paranjpe, who along with his team, wants to bring this power back into the lives of farmers in Konkan and other parts of Maharashtra.

With millions of litres of water saved with minimal cost, they want to empower farmers to take charge of their land, even when the monsoons are far away. He firmly believes that every farmer must own one water storage tank.

Rainwater Harvesting As a Tool Of Empowerment:

Jalvardhini Pratishthan was established in 2003 in Paranjpe’s hometown, Mumbai. He shares that the initial phase of the organisation was filled with various campaigns in Raigad and other Konkan areas of Maharashtra to make farmers aware of this initiative. One of the campaigns was the opening of “resource centres” which enabled farmers to see and experience what rainwater harvesting is.

“When one of them got the system constructed, the others could clearly see the benefits. Word travels fast in a village, and that’s how farmers started approaching us. Now, we don’t need to run special campaigns. Even in this lockdown period, I get about 1 or 2 calls a day, asking for the systems,” the engineer tells TBI.

What sets Jalvardhini apart is that they are not contractors who do their job and leave. They teach the farmers how to build their own rainwater harvesting system. The primary benefit of this method is that once a farmer builds a system, it doesn’t seem like a strange idea. He can pass on the knowledge to his community, starting a chain of sustainable agriculture practices.

“A villager does not wait for an architect, a contractor, and an engineer to build his house. He partners with the local mason and builds his own home. Why should a rainwater harvesting system be any different?” Paranjpe asks.

In Paranjpe’s experience, many government schemes have failed on a rural level because they assume that the villagers will maintain the infrastructure long after it is built. But due to a strain on their resources and a certain bystander effect, that is rarely the case. By making rainwater harvesting systems and individual’s resources, Jalvardhini Pratishthan also puts the onus of wear and repair on the farmer.

The Impact Of Rainwater Harvesting Systems:

Anil Harpude, a farmer, based in Raigad, often mentors others to take up sustainable techniques. He shares that in many Konkan regions, water flows in streams until February and then they start drying up. The rainwater harvesting systems he has built, in association with Paranjpe, has solved this issue to a large extent.

“Earlier, they would get water through diesel pumps. Not only was that a costly option, but it also meant that the farmer with the most pumps gets more water. These pumps also waste a lot of water. I installed a rainwater harvesting system myself and encouraged five other farmers to do so too. We noticed that our expenses are cut by 40 per cent, thanks to this,” he tells TBI.

Following their lead, about 15 other farmers have also installed the systems in their fields.

Sanjay G, a techie from Pune, has a small farm and farmhouse in Ratnagiri. Two years ago, he built a rainwater harvesting system in association with Jalvardhini Pratishthan. “We receive just 150-200 litres of water on summer days which was insufficient for the trees on the premises, and so, we built the tank. But my main objective was to encourage the masons, gardeners and other workers there to follow suit and conserve water in their farms,” he shares.

Jalvardhini Pratishthan has built 350+ rainwater harvesting tanks in Amravati, Aurangabad, Beed, Jalna, Mumbai, Navi Mumbai, Nanded, Nandurbar, Nashik, Palghar, Pune, Raigad, Ratnagiri, Satara, Sindhudurg, Solapur and Thane. They have also undertaken projects in Goa, Gujarat, Karnataka, Madhya Pradesh, Telangana and Uttarakhand. Also, they have mentored 8 NGOs and 33 colleges so they can pass on the knowledge to areas where they have influence.

Their ‘natural fibre cement tank’ is an innovative technique of using eco-friendly materials for the construction of rainwater harvesting systems.

“For an 8000-litre tank, we take Rs 25,000 as a donation, and for a 15,000-litre tank, we take Rs 40,000. I understand that many farmers and Adivasi tribes do not have adequate financial resources to build rainwater harvesting systems. In such cases, the trust bears half the cost,” he says, adding that these capacities do not suffice a farmer’s water needs all year round. They are there to fill the gap between January to May when water in wells and borewells runs out, and the farmer needs to water his fields.

Paranjpe began his efforts thanks to a challenge that his cousin threw at him, but what it has culminated into is truly amazing and inspiring. The constant droughts, floods and agricultural problems that India is facing in recent times have shown us how crucial rainwater harvesting has become.

With efforts like the Jalvardhini Pratishthan, we can reduce the burden on our farmers.