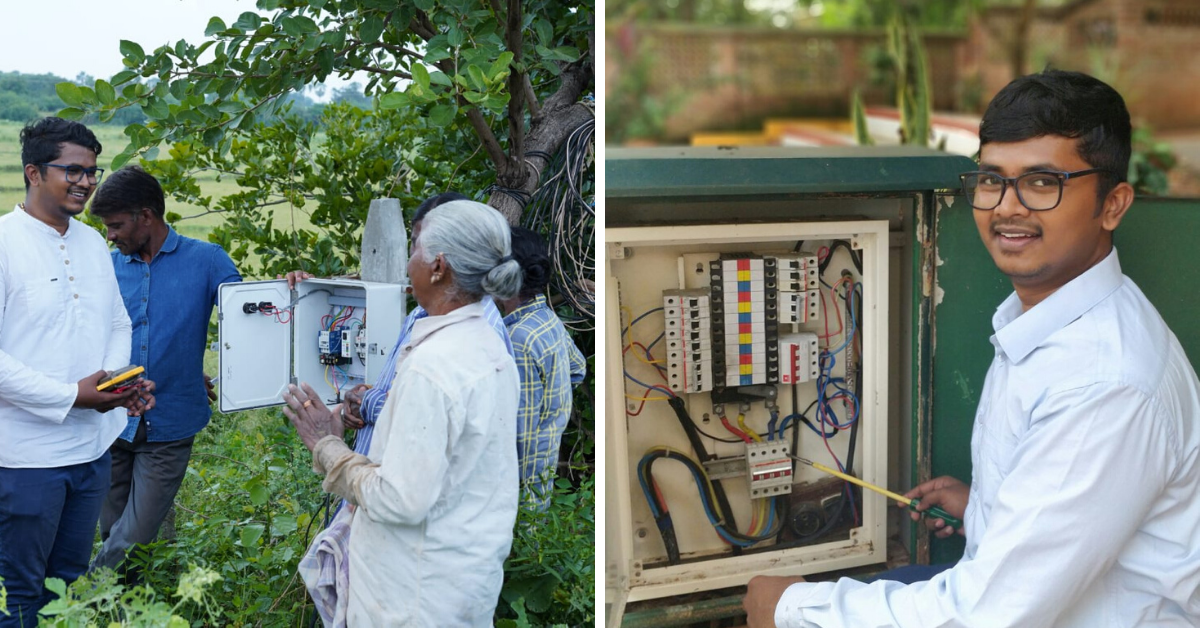 Cheap and easy to use, this innovation stops water pumps from electrocuting farmers – a deadly concern in rural life.

It was Makara Sankranti of 2003 and 6-year-old Satya was flying kites like every other child in the neighbourhood with his friend.

“I was on the terrace, and my friend was standing on the ground trying to catch the falling kites. Suddenly I heard a noise. When I looked down, I saw my friend lying still on the ground,” recalls Satya.

The little boy had been electrocuted after his kite got entangled in electric cables.

After the traumatic incident, Satya naturally took a long time to overcome his fear of electrical devices. Seventeen years down the line, Satya Illa, 23, is a young innovator constantly on the go to find solutions to reduce fatalities due to electrocution, primarily due to low maintenance of electric devices or lack of awareness. 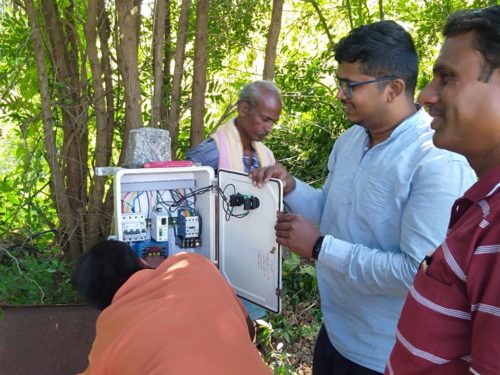 Satya spent years organising numerous awareness programs in rural villages and analysing the reason for the increasing number of deaths due to electrocution, especially among village farmers. Among the many reasons that he came across, he found that faulty motor pumps used in irrigating fields caused severe shocks and at times proved to be fatal.

Zeroing in on this point, he began researching on ways to offer a solution. Talking to farmers further helped him to create a shockproof three-phase electrical motor pump to prevent fatal accidents from happening. What’s more? His innovation comes at half the price as compared to the existing alternatives.

After completing his B.Tech in Electrical Engineering from the Bharat Institute of Engineering and Technology (BIET), Hyderabad, Satya wanted to further expand his understanding of the deaths due to electrocution and how to prevent them.

“While in college, I got the chance to work with the Institute of Electrical and Electronics Engineers (IEEE) in the city, which gave me practical exposure. I learned about the dangers of poorly maintained wires and electrical fatalities caused due to that. Later, I was involved in a project incubated by the Bala Vikasa International Centre, Hyderabad, where they helped me expand my research in the field,” Satya tells The Better India (TBI).

To expand his efforts, Satya also went to Thiruvananthapuram, Kerala and joined ‘Kanthari’, an institute for social change which equips young leaders with accounting, fundraising and project planning. The move helped him get in touch with different innovators from across the world and gave him more clarity on his goals.

During his research, Satya realised that a large number of farmers were affected every year due to poor quality electrical equipment, particularly in Telangana.

“The electrical devices that the farmers have are mostly old and not maintained regularly. This causes frequent cases of electrocution and fatalities,” Satya explains.

At this point in our conversation, Satya recalls an incident when a farmer, Radhika, from Kistapur village, received a massive electric shock while trying to switch off the borewell in her farm. Sadly, Radhika could not make it to the hospital and died on the way.

“See, what happens is, due to the affordability factor, many farmers avoid replacing their motor pumps while many others are unaware of the need of maintenance of these devices which adds to the rising number of deaths due to electrocution among farmers,” informs Satya.

As a solution, Satya decided to design a device that could eliminate this problem as a whole.

“Without Awareness, Innovation is Completely Useless”

In 2016, after creating four prototypes, he came up with a low budget, efficient solution. He designed an ‘Electrical Pump Motor Starter’ made of glass fibre material, which acts as an insulator. Along with this, the device has a single-phase preventer and safety equipment which protects the farmers.

“What makes it unique is the internal circuit, which was designed with the help of IEEE by keeping safety as the priority. We also considered the price factor and made it as affordable as possible without compensating on the quality,” shares Satya.

Satya’s device just costs Rs 7,000 compared to the alternatives in the market, which could cost upto Rs. 15,000.

The next and most challenging task was to convince farmers to try the new equipment. To this end, Satya also started spreading awareness about the issue of electrocution and organised camps across the different villages of Telangana.

“Without awareness, innovation is completely useless. As a social enterprise, I wanted my audience to be completely aware of why they should opt for my device, and I wanted them to be aware of these fatalities around them,” explains Satya.

Seeing the result of the awareness camps, Satya founded ‘Kaanthi’, an organisation which aims to promote electric safety and empower the family members of electrocution victims by training them in renewable energy technologies.

“I did everything I can to make sure that the message reached the farmers. Along with a few volunteers, I started contacting the heads of the community, educated them and took their help to reach out to the farmers,” says Satya.

“I can proudly say that today almost 500 farmers are using my device and the awareness programme has reached over 10,000 rural villagers,” he adds.

For his proactive bend of mind and practical innovations, the young innovator has won several awards including the ‘Youth Inspiration Award’ from BIET in 2018 and the ‘Youth Achievement Award’ for Excellence in Development Work’ from the Commonwealth, London in 2019 for his innovation.

Furthermore, for his efforts in the field, Satya also got the opportunity from Niti Ayog’s Atal Innovation Mission (AIM) to provide training in the field of innovation and leadership to the schools in Hyderabad.

“I wish to expand Kaanthi’s work to other states and hope to reach all the rural villages in India with my message. Only when the farmers have a clear idea about the functioning of devices and the safety guidelines can we say that we’ve made an impact,” Satya concludes.