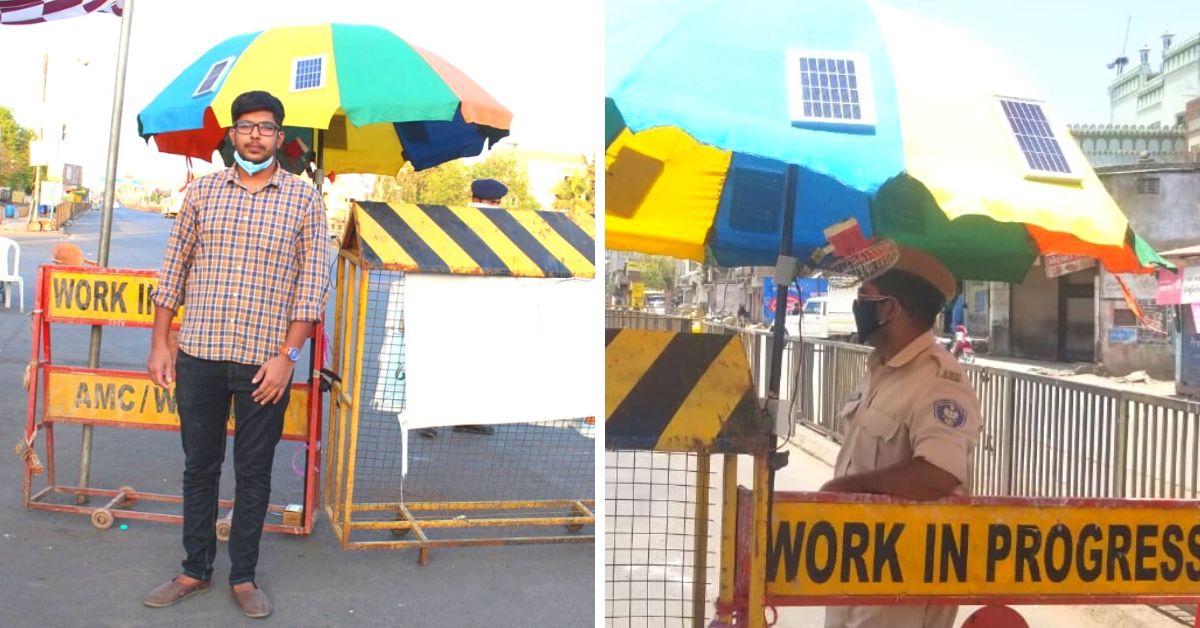 “They (police) are guarding and keeping all of us safe in such testing times while being away from their families. Heat is not just an inconvenience, it could kill and our city has proved that in the past. The lockdown has seen a united front put up by everyone by helping each other. As an engineering student, this is my contribution.”

The dreaded Amdavad summer has dawned upon its citizens. During this lockdown, the general public is at home, under their fans or comforted by air conditioning. And they use umbrellas when they step out for a short while during the day.

However, the crippling heatwave is not kind on frontline workers, especially the police, who are manning check posts on open roads to ensure the lockdown protocol is followed.

What makes the 2020 summer of Ahmedabad worse is that the city has a high number of coronavirus positive cases, thus demanding the entire police force to be more vigilant, with few breaks.

When Adeeb Mansuri, an engineering student saw cops patrolling his area with little protection from the scorching heat, he knew he had to put his skills and knowledge to use.

In a laudable move, Adeeb designed two umbrellas that not only provide shade but the sun, but also cool air. 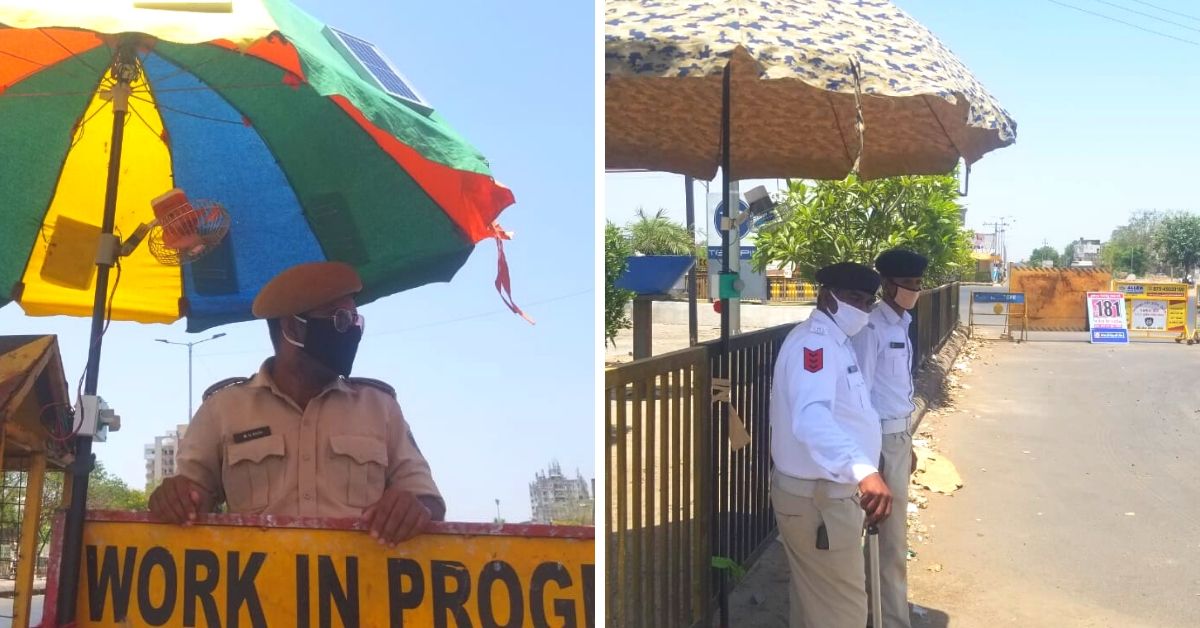 The one-of-its-kind umbrellas are in-built with a small fan, charging sockets and solar panels with a capacity to generate up to 20 watts. They also have a battery backup that can be used at night.

“They (police) are keeping all of us safe in such testing times while being away from their families. Heat is not just an inconvenience, it could kill. Our city has proved that in the past. The lockdown has seen a united front put up by everyone by helping each other. As an engineering student, this is my contribution,” the 23-year-old tells The Better India. 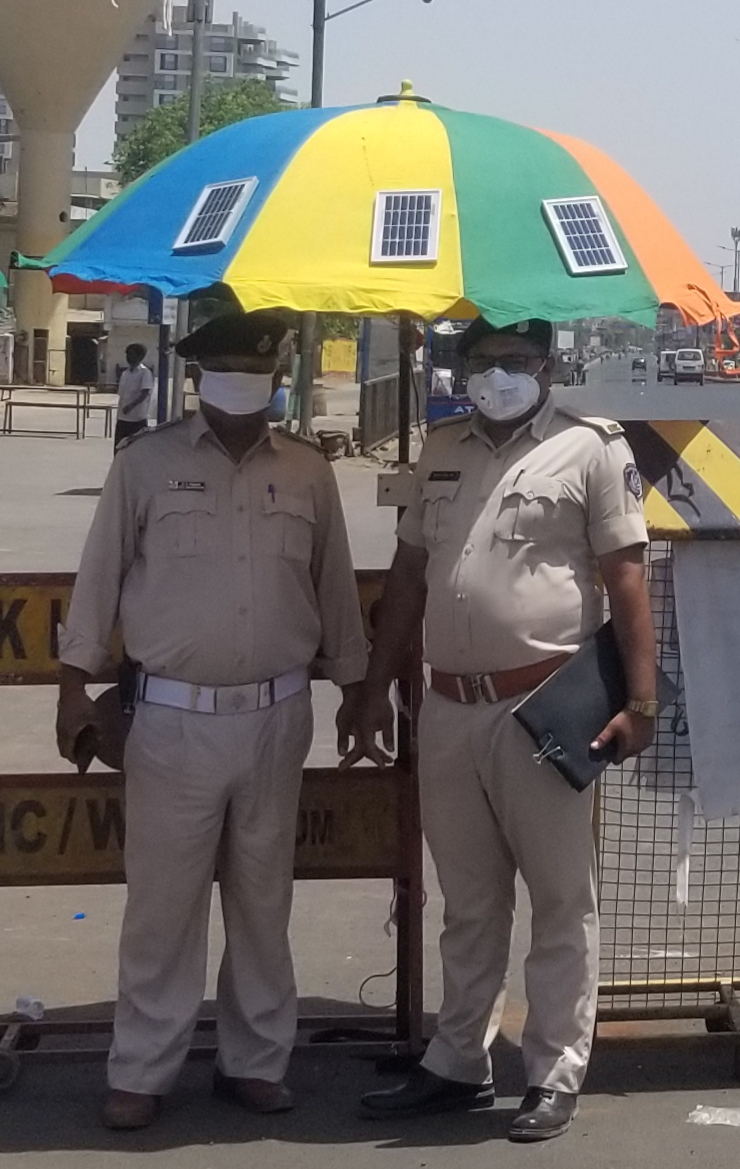 Adeeb has provided two umbrellas (each costing up to Rs 3,000) for free at different areas in the city. It has received positive responses from the force.

“They (police) really liked the umbrellas as the fan and charging point are very efficient. They have to stand every time a human or vehicle passes but in between they enjoy the air coming from the umbrella. They have given me an order to make five more such umbrellas. The college is helping me financially and in procuring the raw materials,” says Adeeb, who is in his final year of engineering at L.J. Institute of Engineering and Technology.

The idea of making such a sustainable innovation struck Adeeb in January this year after he came across solar-powered table fans. He instantly enrolled himself in the incubator centre of his college and started working on a prototype umbrella for the college’s security guard.

“The city-summers are extremely harsh between March and June. The vegetable, juice or coconut vendors often toil under the unrelenting sun for hours. As a child, I was impressed by their strength to work despite the heat but as an adult, I realised it was a necessity,” he says.

With financial help from college and guidance by the professors, Adeeb successfully built and tested an umbrella given to the security guard.

Now with encouragement and positive feedbacks from the city police, Adeeb hopes to make it commercially viable and eventually launch his product.