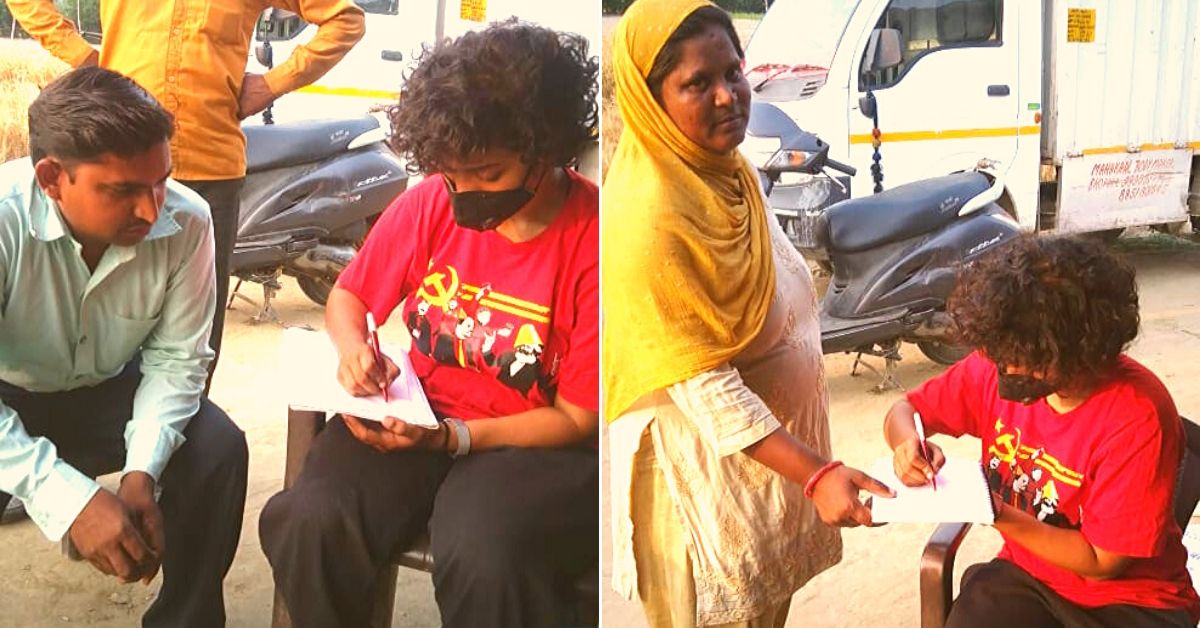 “Anushka, a 19-year-old student from Delhi University, has truly understood what it means to put humanity above all. Through her example, I hope many others step up.”

Life is harder than before for people dwelling in low-income neighbourhoods around the country. Courtesy lockdown. In Delhi, one can see them in the still-dark hours of the morning, lining up outside the schools run by the Municipal Corporation to get their share of food. Sometimes as early as 3 AM.

For 19-year-old Anushka Ganguli, a final year BA Physics (Honours) student from Delhi University, mornings have become early too. The teen sets out from her flat in the wee hours to distribute food, rations and medicines. She knows the people are desperate, waiting for some help so early in the morning. And she makes sure she is there on time.

Once Anushka has given the packages to the needy, she moves on to the next place to do the same.

“On most days, however, I begin my day around 7.30 AM. There is no fixed delivery schedule, and it depends on the day. There are two parts to what I do—scout for those who need essentials and the actual delivery itself,” she says, speaking to The Better India (TBI).

A large part of her scouting process is undertaken on a scooter, although she really can’t make the required percentage of deliveries on it. For most distributions, she moves around in a couple of tempos and cars carrying all the food packets and rations.

Anushka comes back to her residence, usually by 11.30 PM or midnight. Despite describing all of this in a rather matter of fact tone, what it cannot hide is her steely determination.

How Did The Volunteering Work Begin?

Unlike many of her college mates, the Bengaluru girl decided not to go home during the lockdown but stick around and help. And her involvement in relief work began with work in North East (NE) Delhi earlier this year following the communal riots.

One day, she received a distress call from a hospital in urgent need of medication, which she helped deliver. At the time, a relief organisation’s office was collecting medical supplies for hospitals and those affected by the riots. Many other organisations working on riot relief had used their office as a base for their efforts. It was at this office where Anushka and a couple of her friends got together to form a group and help with relief work.

“After riot relief, when the COVID-19 epidemic began, a couple of them went their own way. Those of us who stayed back continued working with COVID-19 relief. While you can apply for travel passes online, I got mine through a friend who went to the DCP’s office,” the young college student informs.

There are about three tempos Anushka, and her friends rent which carry supplies from Sarita Vihar to Scindia Farms. The fourth tempo, which is operated by a trade union member, helps Anushka deliver to the locations.

“For instance, on the way to Khajuri Khas, where I have to deliver to 100 families later today, I have to first verify whether our point-of-contact person in the area is legitimate, the identity of these families and are they really in need of essentials, etc. Once I am through this verification process, our team collects the packets, loads them in the tempo and distributes them either door-to-door or leave it with the contact person,” she says.

The logistics of distributing these essentials depends on the place. “We leave it either with the contact person in the area, hang around with the tempo and ask those families to collect it in a centrally located area without creating a crowd. But sometimes if there’s a chance of a mob gathering, then I go house to house on my scooty,” informs Anushka.

“Another friend of mine Avinash helps me coordinate with civil society organisations to obtain food packets and rations. Tying up with local NGOs, has made my work easier in the NE, thanks to my friend Nisha, who runs a foundation. She helps with the scouting and verification of those who need it,” she says.

If a donor has given bulk material, Anushka works alongside employed union labour and packs it at a sorting centre in Azadpur. Each ration kit includes 10 kg atta, 10 kg rice, 3 kg dal, salt, sugar, tea and everything.

“We also get packets from Goonj, a non-profit, which provides 10 kg atta, 10 kg rice, nutritional supplements for children, books, etc. We pick that up from Sarita Vihar and transport it to a holding area called Scindia Farms which a friend of ours offered, store it there and distribute to various parts of the city. Today, I have to deliver essentials to 18 labourers in Naraina. After this interview, I am heading towards Kashmiri Colony, following which I will go to Khajuri Khas. It’s going to be a very long day,” she says.

Sometimes, what her group also does is pay the ration shop owners through Google Pay and Paytm and allow families in need to collect their rations from them.

Isn’t she worried about her safety? She says her parents are “naturally concerned”. They ask her not to stay out late and sometimes think she is wasting her time delivering essentials to one family. “They are like, ‘it’s okay the family will manage without you’. But that’s alright since it’s natural for parents to worry. Of course, I am concerned about my safety, but there are lesser people on the street so that’s an advantage,” she adds.

Although Anushka carries a lot of responsibility in delivering relief material, she is adamant that none of this works without her comrades. This includes the likes of Sunil and Shiva, who drive the tempos, alongside Anil Singh, a union man and her contact in Azadpur. She also credits Vishwajeet, Richa and Subhag who have allowed her collective to use Scindia Farms.

Impact of Her Work

Rohit Kumar, a Delhi-based educator, tells TBI, “I needed someone to deliver some diabetes medication to a friend who wasn’t getting any in his neighbourhood. I requested Anushka to drop off the medication in the morning. By the same evening, she had done so much to my friend’s great relief. I actually met her for the first time a couple of weeks later when she swung by my place quite late in the evening to pick up cloth face masks to drop off at an NGO.”

Yet, Anushka feels not enough aid is reaching people.

She believes the government isn’t doing a stellar job of distributing relief material. The lack of clarity about the lockdown has compelled people to hoard essentials because they don’t know when it will end. This, she believes, has made her work harder. She accepts some amount of hoarding, but not by those who can survive five to six months. If one family gets an extra food packet or ration kit, it doesn’t matter as much unless others are getting them too.

“We need clearer directives from the government. The system is just not working as it should. Distribution of free wheat grain in place of flour through the PDS system just doesn’t make sense because now there are long lines outside chakkis (flour mills) to get that converted into atta. These chakkis are charging exorbitant prices to convert the wheat grain into flour,” she says.

Another concern is getting urgently required medication and treatment for those with other life-threatening conditions. “For instance, there is this woman in Shastri Park who has Leukaemia, who I was willing to take to a hospital. But when we reached there, the hospital had no blood to spare because nobody was donating because of the lockdown. Treatments are on hold, and people are being turned away,” she laments.

“Civil society does not know how long this lockdown will continue, and this is particularly problematic because of the shortage of funds. We really can’t help to the extent of fulfilling all their needs. We need the government to do a lot more. Many are scared, particularly those who don’t know where their next meal will come from. I know of people who are living on chai and water. If they get any food, it mainly goes to their children,” she argues.

“Anushka’s work is important because it exhibits two qualities—leadership and empathy—that are sorely lacking today. I define leadership as the ability to respond selflessly to a need which Anushka has truly done. She has truly understood what it means to put humanity above all. Through her example, I hope many others step up,” says Rohit.

(If you wish to assist the likes of Anushka, you can donate to this account:

If you are making any donation, Please inform on baligatrust83@gmail.com & avinash.sfd@gmail.com with the Sub: “Donation for COVID-19” so that we can provide the Donation receipt. For any query you can contact- +918010833325. For more information on our organization, please visit this link: http://baligatrust.org/lockdown-and-covid-19/)