Once popularly known as the urban heritage of Indore, the River Kahn and its tributary, Saraswati began choking on effluents with the rapid industrial boom in the 70s, rising population and mounting settlements near the riverfront. This resulted in the direct dumping of household waste and open defecation.

But due to the efforts of Indore Municipal Commissioner, Asheesh Singh and his team, a two-kilometre stretch of Sarswati river flowing through Indore has been made 100 per cent sewage free by treating inflow from 28 sewage lines through a fully functional Sewage Treatment Plant (STP)!

“What makes this river cleanup model unique is its capacity to recycle eight MLD (millions of litre per day) of sewage into clean water. We constructed the STP inside the city to make greywater our asset. Apart from environmental and health benefits, this project is also helping us conserve water. The recycled water is used to fill up other dry water bodies and water 250 gardens. Presence of fish inside Saraswati river is our validation for success,” Singh informs The Better India (TBI).

To achieve this feat, the IAS officer and Indore Municipal Corporation (IMC) adopted a slew of measures such as rigorous mapping of sewage outfalls, restricting encroachments, rehabilitation of houses on the river bank and around-the-clock civil construction activity.

The primary challenge IMC grappled with was the wear and tear of the three primary sewage pipeline lines that meet the STP located outside the city.

“The old primary lines were installed ten years ago that started degrading around two years ago. Due to this, sewage was being released directly into the river instead of entering the STP for its treatment. There were 24 such locations where the pipeline stopped working. The lines even choked causing a sewage overflow,” Singh explains.

A similar problem was observed with the Kahn river as well. So, the IAS came up with a plan in 2018 to restore both the rivers (a total of 23 kilometres stretch) by installing decentralised STPs.

The plan was to install six STPs with a cumulative capacity to treat 65 MLD of sewage from 434 locations across the city, “Majority of the civil construction work is completed. Of the six STPs, one is fully operational and others will be post the lockdown period.” 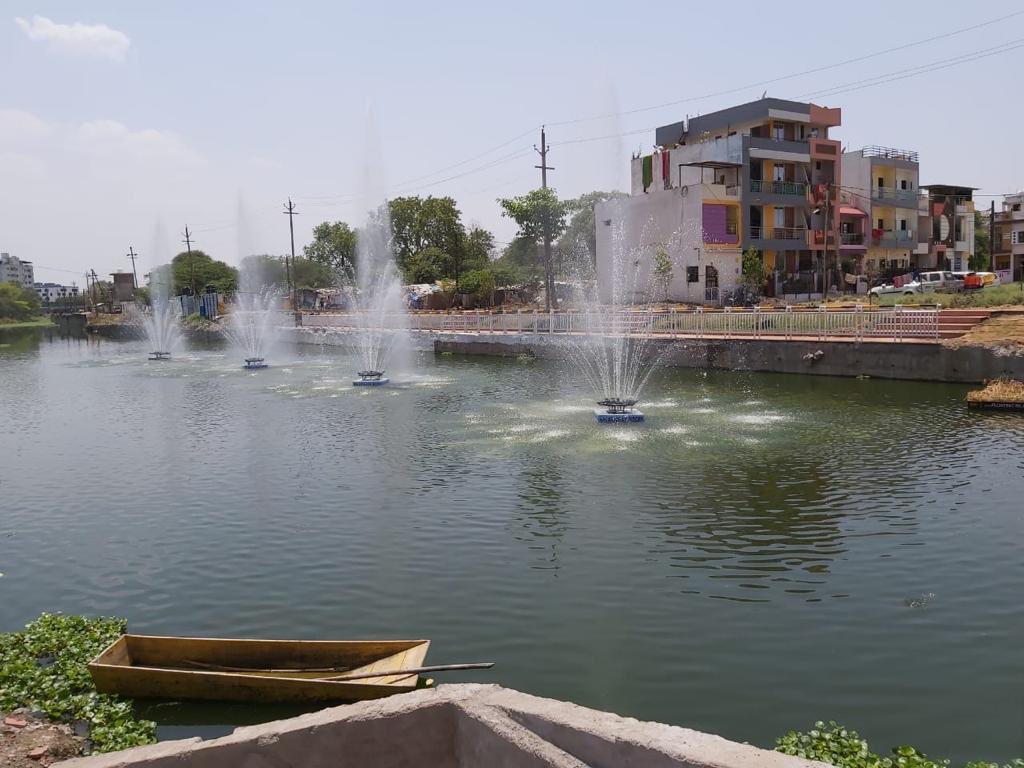 Ideally, the sewage enters an STP for treatment which is then directed into a river. This process prevents river pollution and groundwater contamination.

However, Saraswati was polluted due to damage or lack of sewage lines. So, mapping the sewage outfalls was the first step IMC took. Once, the spots were identified, they were geotagged to lay new pipelines and connect it to STP.

The next task was to find places to install the STPs inside the city, “We had to make some tough decisions including rehabilitating 250 households due to space crunch. The unequal ground level (slopes) made the installation process more difficult.”

Alongside tapping the outfalls, IMC worked in the rectification of primary lines and de-weeding the two rivers with the help of earth excavators. To maintain water quality, IMC also created artificial floating islands with the help of a private firm.

An artificial floating island is a soil less structure constructed with floating mats, floating aquatic plants, sediment-rooted emergent wetland plants that reduce algae by recycling phosphorus and nitrogen. The islands also improve the Biological Oxygen Demand (BOD) level of the water. BOD is the unit for testing the amount of oxygen in the water.

“The BOD level should be less than 10 ppm (parts per million). If the BOD level is high then the river is heavily polluted and as per our recent test, the Saraswati’s level is eight as against 70 or 80,” Singh proudly says.

The IMC has also constructed fountains in regular intervals across the 2 km stretch to beautify it further. The announcement of completion of Saraswati project (on 12 April) came when the entire country is under a lockdown.

But in these despairing times, such positive news is indeed welcome!

To start your journey towards building a sustainable life, explore and enroll yourself in courses by The Better Academy.

From Not Clearing 1st Attempt to Getting AIR 12: IAS Shares How She Cracked UPSC

How to Prepare Your Mind & Plan Your Timetable for UPSC CSE: Dr Tanu Jain Shares