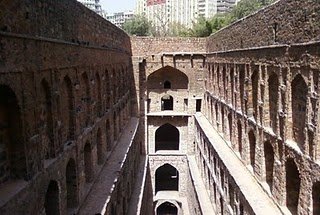 In the midst of the mundane city buildings that tower sinfully over the unnoticed slums and rural remains of an increasingly urban space, there is not much a tourist can

In the midst of the mundane city buildings that tower sinfully over the unnoticed slums and rural remains of an increasingly urban space, there is not much a tourist can expect. There is even less a local can hope to see. Yet, some wonders need no trumpet blows, no billboard signs. The right traveler finds his way to these silent standing monuments, set against a backdrop that is much more humongous and yet, fairly small.

In the heart of Central Delhi, where half the city rushes to work and the other half lazes around in Cafés or tea-bars, Agrasen ki Baoli (step well) comes as a sweet surprise on a hot summer afternoon. It is a perfect place to steal a quiet moment from your busy lives, to experience a moment’s stand still and catch a breath to just let the massiveness take you over in its stride. It is a juncture between the past and the future, a moment entirely yours, unadulterated by any influences, to truly define life just how it is. No exaggerations. No understatements.

Stepwell construction is known to have gone on from at least 600 AD. It is India’s unique architectural marvel.

Life in Delhi is incomplete without visiting these step wells, these humble structures built in magnificent glory by the successive rulers of Delhi. Carved profusely, Agrasen ki Baoli, a 60 meter long and 15 meter wide structure, has low chambers that provide the much needed respite from Delhi heat. To add to it, the flocks of lively pigeons taking flight are a remarkable sight in an otherwise stone structure. One can easily watch these birds all day long. They seem to be weaving a story of their own.

What is fascinating about step wells is how long they have existed. Stepwell construction is known to have gone on from at least 600 AD. It is India’s unique architectural marvel. In fact, India is also proud of being home to the world’s deepest step well, the 35 meter deep Chand Baori in Abhaneri near Jaipur in Rajasthan.

In ancient times, Baolis represented a feeling of community, of oneness especially for women, for whom fetching water would be the only activity they could independently pursue. For the women, the baolis offered an ephemeral sense of freedom. With the British rise to power in India in the early nineteenth century, the opposition to step wells became more pronounced. The installation of rural taps became a top priority of the Raj.

While finding step wells in an urban setting might have sparked an initial surprise, on second thoughts it is only logical. Managing and mediating water resources was critical even in ancient times, especially in the rapidly growing cities. Then again, climbing up and down the baoli steps offers health benefits of its own (especially for city dwellers)! The cities have much to derive from these monuments – A glorious past, a proud present and a sustainable future.