For Low Fees, This Ex-IAS Officer Has Helped Over 300 Students Become Officers 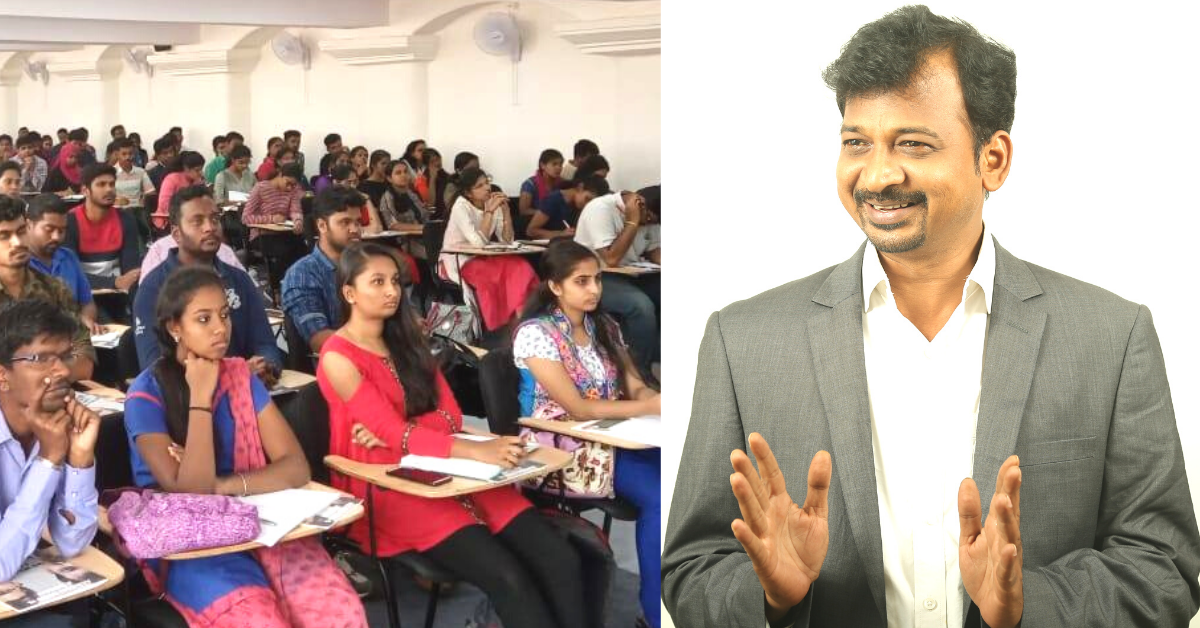 Officers IAS Academy in Chennai founded by Israel Jebasingh has mentored over 3000 plus CSE aspirants over the years. Of which 300 are officers today.

An erstwhile Indian Administrative Officer (IAS), Israel Jebasingh made the transition to becoming an educator in 2013, when he started the Officers IAS Academy in Chennai to train aspiring Civil Service Examination aspirants. Over the last eight years, the academy has trained more than 3,500 students for various competitive examinations.

In this exclusive interview with The Better India, Jebasingh speaks about his motivation to start the academy, the methodology adopted, and some of the students who have left an indelible mark on him.

On Why he Chose the Civil Service

“My dream was something else,” he begins. “I wanted to become a doctor, but my marks did not allow me to take it up. I remember my father consoling me saying that being a part of the civil services was also of great value and I could perhaps consider that.”

Jebasingh decided to pursue an engineering degree and recollects how even there he was just below average.

“I did not even make it through the campus selection since I had an arrear in my examinations. It was at this time that the thought of attempting the civil service examination struck me again,” he says.

He tells me how, other than his parents, no one around him seemed to have any confidence in him doing well in life.

“While I was not from IIT or a government engineering college and neither did I have the marks to back me up, there was something that pushed me to study for the CSE,” he says.

During the time Jebasingh was preparing for the examination, he took up his first job, which he remembers paid him Rs 2,750 a month.

It was the post of a lecturer in an engineering college.

During his first and second attempt, Jebasingh was unable to clear the Mains and it was in his third attempt in 2001 that he secured an All India Rank of 294.

All this while, he still held on to his teaching job. With this rank, he got placed with the Indian Railway Traffic Services (IRTS). Wanting to get through the Indian Administrative Service, Jebasingh attempted the exam once again and got an All India Rank of 59 in 2004.

His first posting was Assistant Collector in West Bengal’s Jalpaiguri district. During the course of his work, he was also awarded with the Best Sub-Collector award by the Lal Bahadur Shastri Training Academy, Mussorie.

Birth of the IAS Academy

It was the year 2009 that changed his career path.

“In 2009, my mother was in the final stage of cancer and I took one year leave without pay to be with her in Chennai.”

Being in Chennai and having considerable time on hand made Jebasingh think of starting something of his own.

“The first thought that struck me was to open a school. However the amount of investment it needed deterred me,” he says.

“My mother being a school teacher somewhere maybe played a role as well. I grew up seeing her work and that inspired me,” he says. “I felt most passionate about teaching, and I figured that there weren’t many UPSC coaching offering quality help in South India. Hence, I decided to start teaching UPSC aspirants,” says Jebasingh.

It took some time for him to gather conviction, and finally he submitted his resignation in 2011 and two years later launched his coaching centre in 2013.

He started in a small rented place, with seven students in the first batch. He goes on to say, “Teaching aspirants was the most natural thing for me to do given that I myself had gone through the rigors of studying and appearing for the examination.”

Given that a majority of the training academies are situated in the North of India, Jebasingh shares with us the challenges that he faced during the initial years.

“Initially, it was quite challenging as I had just seven students. I had to borrow money from my friends even for paying the monthly rent of Rs 50,000 for the academy. However, gradually as we started producing results, students started coming from different parts of the country.”

He laughs as he says, “When I started out, I was everything rolled into one – receptionist, counselor, trainer and manager of the place. The academy and I have come a long way since then.”

What Makes this Academy Stand Out?

In Jebasingh’s opinion, he feels that the individual attention and school-like environment that the academy has managed to set-up is what stands out. “Our fees is almost 50 to 60 per cent lesser when compared to the academies in the north.”

Speaking about the academy and how it functions, he says, “The study room in the academy opens at 4.30 every morning and our first batch begins class at 6.30 AM.”

What’s interesting is that Officers IAS Academy has tie-ups with over 25 hostels across the city where these aspirants can find lodging.

When asked how aspirants are selected, Jebasingh is quick to answer, “It is on first-come-first-serve basis. We do not want to have any screening process and select the students. The intent of the academy is to give everyone a fair chance. I truly believe that anyone can clear this competitive examination. All we look for is committed students who are willing to work hard to clear the exams.”

Having trained more than 3,500 aspirants till date, Jebasingh points to some of the common mistakes that are often made.

i) Instead of studying ten books at one go, it is better to study one good book ten times and have a better understanding.
ii) At least 25 per cent of the preparation time should be allocated for revision every day.
iii) One should choose the optional subject based on one’s own interest rather than going by any trend.
iv) One should always keep in mind that the UPSC Civil Services Examination toppers are also ordinary people, and the only thing that differentiates them from others is their extraordinary commitment.
v) One should compete with themselves and improve every day rather than competing with others.

Officers IAS Academy is now operational at two locations in Chennai, has one centre in Bengaluru and also has a robust online presence.

If you wish to enroll or get more details about this academy, you can click here.