The traditional folk music of Rajasthan which was once the highlight of every celebration has now been relegated to filler status in Bollywood or confined to elite art circles. The

The traditional folk music of Rajasthan which was once the highlight of every celebration has now been relegated to filler status in Bollywood or confined to elite art circles. The new generation is completely unaware of the mellifluous, ethereal rhythms of traditional Indian music. Our  folk artists are in a deplorable condition with no support from the government; they are left to forage work for themselves resulting in a slow death of this art form.

AMARRASS SOCIETY FOR PERFORMING ARTS is a music foundation with a goal to revive folk music. The society intends to achieve this by scouting for talented musicians, archiving and recording folk music, including traditional instrument makers in the fair trade model. The endeavour of the venture is to create awareness and sustainability around heritage music.

Amarrass records is a fair trade label put together by a group of experienced professionals committed to deliver an integrated music and cultural experience that is inclusive, highly accessible.

They are mentoring and promoting musical communities like The Manganiyars : a community belonging to the obscure villages around Jaisalmer , Jodhpur and Barmer in western Rajasthan. The Manganiyars were court musicians whose Royal Patrons vanished but their love for music lives on.

Their music is complex and secular, its roots spread wide, though chiefly in Hindustani classical music. But its delivery isn’t bound by the set rules of this tradition. The Manganiyar splits notes into improbable fractions, keeps beat with his eyes, shifts tempo as suddenly and effortlessly as a gust of desert wind moves a dune.

Here’s an insightful interview with one of the Amarrass team members :

Q: When did the idea of Amarrass records come about ? Who started it?

A: The idea has been brewing in our minds, separately for a number of years. If you are asking when it actually came together this was in mid-2008.

Who started it: four musketeers

Q: What is the current scenario of folk artists in the country? Do they get any support from the government ?
A: We’ll give you an example. The finest sarangi maker in Jaisalmer district goes off to Maharashtra as a migrant labourer, making furniture. In fact we had the same question as you when we started this, and this sarangi maker is an indicator of the current state of affairs.

Q: Today’s youth is not that interested in Cultural Music. How do you plan to change that?

A: We don’t agree. We believe there are enough people, including youth out there, that have an appreciation for good music. The response of the youth to our concert at Purana Qila and to the CD’s and LP’s we have released is proof. As for change, if and when it happens you can be sure that we will be at the forefront of it.

A: We believe in music without borders. So while we will be looking very closely at the scene in India, expect to see acts from around the world. 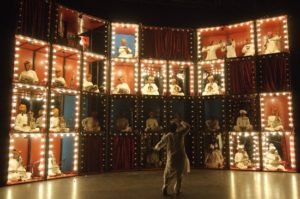 43 musicians are seated in 36 red-curtained cubicles arranged in four horizontal rows one on top of the other; and the concert begins when a single cubicle lights up and the first singer begins his song. Grab your passes now mail at passes@amarrass.com or call 011-46661200.