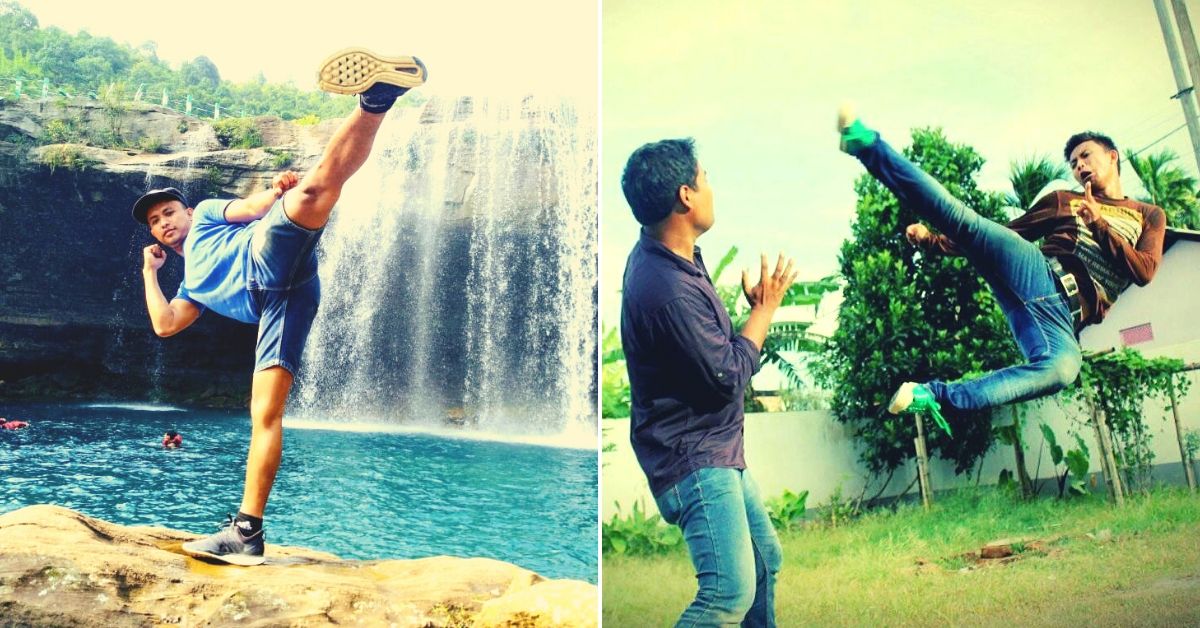 “There is no question Montu is a proper fighter. His talent is world class. He is as good as the famed Tony Jaa,” says Kenny Basumatary, the Assamese director and actor who has featured in films like Mary Kom.

Last month, a friend of mine from Assam who is a cinephile, shared an interesting video clip of a young man exhibiting an array of martial arts skills on the sets of the period drama ‘Tanhaji: The Unsung Warrior’ released earlier this year.

Playing star actor Saif Ali Khan’s stunt double in the film, the young man in question was flawless in his presentation. Further research revealed that he is Montu Deuri, a martial artist and actor from the Nam Deuri village in Assam’s Jorhat district.

Before a career in the film industry, however, Montu, who is Black Belt First Dan in Taekwondo, was a national-level fighter winning multiple gold medals in domestic tournaments. He is also a Red Mongkol in Muay Thai and expert practitioner of Kung Fu.

With not enough money in sports, he decided to take the plunge in Assamese cinema. But this choice wasn’t borne out of desperation. It came from a genuine love of action films.

“I never thought that one day I would work on a Bollywood set performing martial arts. Growing up, I loved watching action films like the cult hit ‘Tom Yum Goong’ starring the legendary Tony Jaa. Of course, Jackie Chan is another favourite, but Tony Jaa was the ultimate action hero for me,” says Montu, to The Better India.

Love for the game

Coming from a rural agrarian family living deep in the Brahmaputra Valley, his parents and relatives were initially dead against the idea of learning martial arts. But his determination to learn never wavered.

“My family only had a bicycle, which my father would use to transport crops to the local market. After school, I would cycle 20 km to Jorhat city, and travel back home for the same distance. My friends and I managed to keep this a secret from my family for months, but eventually, they found out. There were days when I would not get the cycle because of my father’s work, so I’d ask my uncles to lend their cycles to me. They would scold me, but eventually give in,” he recalls.

It was in Class 9 when he began learning Kung Fu under the tutelage of Abinash Baruah, an instructor at the local Manchuria Kung Fu Academy in Jorhat, who was kind enough to let Montu learn for free because he knew how long he had travelled and the effort it took.

After more than three years of learning Kung Fu, he transitioned to Taekwondo, where he earned his stripes as a (first dan) Black Belt certified by the Kukkiwon, which is also known as World Taekwondo Headquarters, in South Korea. He needed it to compete at the Nationals.

Winning medals at the Nationals brought him much fame back in his home village with his photograph appearing in the local newspaper, but no money. Calling it a “challenging time” in his life, he decided to pursue his passion for martial arts, learning Muay Thai from Rakesh Meitei, a Manipuri, who in 1999 became the sport’s first Indian instructor.

It has been nearly nine years since Montu first began learning martial arts. Despite participating in a few privately organised tournaments and earning anywhere between Rs 10,000-Rs 20,000 in each one, he admits to having taken a lot of beating.

But what attracts him to these combat disciplines despite the real threat of serious injury?

“What I love about martial arts is understanding the craft and technique behind the fighting. There is so much untapped knowledge in these disciplines. You not only learn about fighting, which I love but also about yourself. Moreover, a dedication to learning martial arts brings discipline to your life,” he says.

“I seriously began considering a career in films after the release of popular Assamese film ‘Local Kung Fu’ directed by Mumbai-based filmmaker Kenny Basumatary, which was released in September 2013. Seeing other actors from my home state performing fight sequences on screen, I thought ‘this is something I can do as well,’” recalls Montu.

Nearly a year later, his cousin, who lived 300 km away in Guwahati, called him for an informal gathering of martial arts enthusiasts and practitioners in the city. There, Montu found an opportunity to demonstrate his unique skill set, and present at this get together was Utkal Hazowary, an Assamese actor and professional martial artist who had acted in Local Kung Fu.

Suffice it to say; he was impressed by what he saw.

“He took my phone number and a demo video I had made showing my skills and forwarded it with my contact details to Kenny Sir. One evening at home, I received a call from him asking me to come to Guwahati and make a short fight video. I was so excited at the prospect of meeting him that I arrived in Guwahati three days before the scheduled meeting in October 2015 and stayed with a friend,” he says.

After they shot the video, Montu returned home again to further his training in Muay Thai. Nearly a year after that shot film, Kenny gave Montu his first big break with a role in ‘Local Kung Fu 2’, the sequel and an action adaptation of William Shakespeare’s Comedy of Errors.

The movie changed his life. Receiving a great response from cinema-goers all over the state, Montu had finally realised his dream of appearing on the silver screen.

“When I saw the demo clip, I understood he had some real fighting chops. When I met Montu in Guwahati, we shot a short fight video just to see how he would do. Initially, he was very stiff and shy. So, I called him again and reshot that video. When I came back and started working on my film Local Kung Fu 2, his confidence had dramatically increased. He was much better on the screen, so we cast him as one of the main villains in Local Kung Fu 2,” says Basumatary, to The Better India.

Since then, Montu has gone onto work with Kenny in the 2018 release Suspended Inspector Boro and has recently concluded shooting for Local Utpaat. “Kenny Sir has been a real mentor without whom I would have never found work in Assamese films, never come to Mumbai and do the things I love. He has played a massive role in shaping my career, offering me financial help and emotional support whenever I needed it,” remarks Montu.

Sometime in December 2017, a few months after the release of Local Kung Fu 2, Montu visited Mumbai for the first time with Kenny.

“I took him to Mumbai because for someone with his talent there are more opportunities there than in Assam,” says Kenny.

“But one day, I got a call from Kenny Sir’s assistant telling me about an audition for a movie called Mard Ko Dar Nahi Hota Hai. I auditioned and landed a small part in it as a fighter. It was my first screen appearance in a Bollywood film. Following this movie, I worked in Saaho again as a side fighter finding screen time and in Mardaani 2 before landing a role as Saif Ali Khan’s stunt body double in Tanhaji. But beyond playing his stunt double, I was also given work training the fighters in this film,” he says.

He even got a call to work in ‘Uri: The Surgical Strike’, but at the time his schedule was full working on Suspended Inspector Boro. Nonetheless, Montu admits that at no point in his life before leaving Assam did he ever think that one day he would play the stunt double of a popular Bollywood actor and even give him cues on set.

“There is no question Montu is a proper fighter. His talent is world-class. He is as good as the famed Tony Jaa. As a trained fighter, his body language is correct and perfect for fighting. I have learnt a lot from him also. After training with him, my footwork, overall body posture and movements have become much better,” says Kenny.

But screen fighting is very different from real-life fighting.

“On screen, you need to exaggerate your movements a little bit and do all your punches and kicks from a safe distance or in a controlled manner so that nobody gets hurt. Finally, your reactions to getting hit have to be very good. This is why even for small villain-type roles, we never take anybody off the cuff. We always audition them and check out their reactions. Only if their ‘getting hit’ reactions are good, we take them because it makes a massive difference to the scene,” argues Kenny.

“Montu has all these qualities. He is a real-life fighter, very good on screen, and his reactions have been very good since day one. He is the complete package. Besides, he is very creative when it comes to fight movements, fight choreography and shot taking. Often, he comes up with some brilliant ideas. He is made for this stuff,” he adds.

“Working on Tanhaji was an incredible experience. I learnt so much from those on set, particularly from the German technicians who choreographed some of the massive fight sequences with sword fighting in the climax. I picked up a few skills along the way about action choreography, filmmaking and directing. I also learnt so much from director Om Raut, who looked out for me. He helped me obtain a membership card from the Movie Stunt Artists Association, without which I couldn’t perform stunts on set,” he says.

Besides playing Saif’s body double, Montu would also walk him through some of the stunts he needed to do. However, the high-risk stunts or those Saif couldn’t do, were left to Montu.

For an eight-hour gig as a stunt double, he received around Rs 10,000 per day. As a martial arts trainer, he earned about Rs 1 lakh per month. The agreement Montu signed was for eight months. While he earned a decent sum working in the film, there remained a serious risk of injury with broken bones and fractures.

But on big-budget sets like Tanhaji, Montu claims that medical expenses borne out of any injury on set was handled by the production team.

“Besides injuries, there is always some tension about not getting regular work as well. But with my training and skill set, I am confident that it will not be a problem. Yes, I do hope that one day I land a lead role using my skills in martial arts. For the time being, such opportunities are hard to come by in this regard, but there is no harm in dreaming,” he says.

“He is definitely a leading man material. What we need to do is find someone with the right kind of finances to back a project worthy of his skill level. There is a Cambodian film called Jailbreak. That’s not a very high budget film, but from start to finish it is one fight sequence after another with a few breaks in between. That film is almost shot entirely in one location. If we could do something at that level here in India, Montu would be great at it,” he says.

Also Read: This Man’s Brilliant Stories Took Him from a Meghalaya Village to Cannes Film Festival!