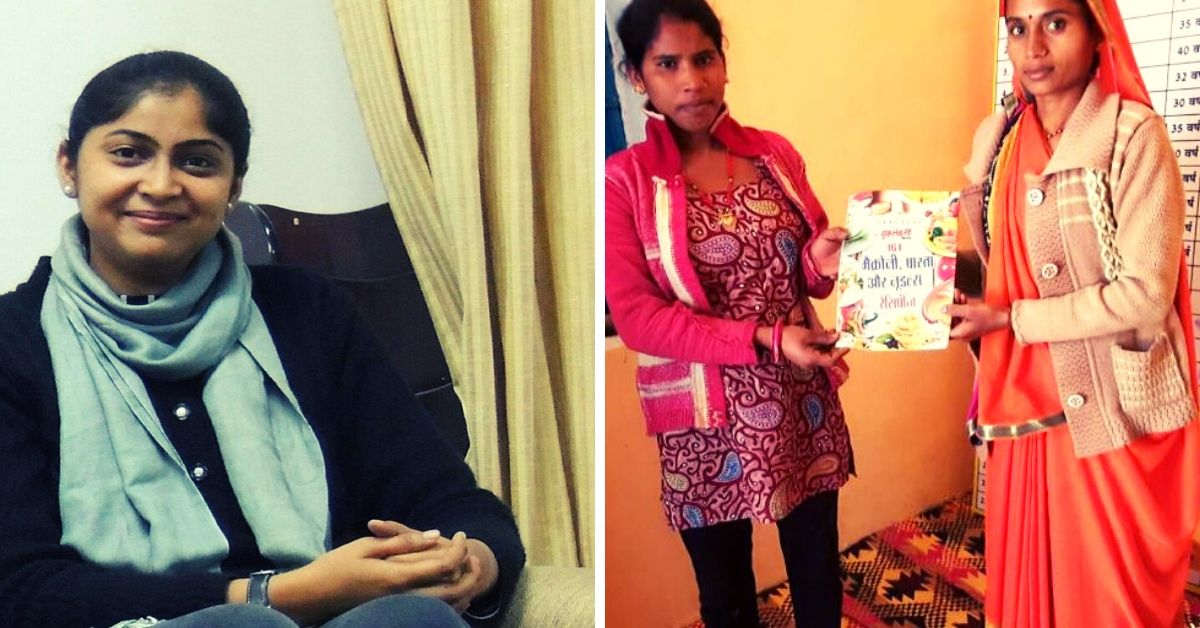 Women, who were once even scared to speak in the house, now step outside with a hope to learn something new every day in Tikamgarh district of Madhya Pradesh

As soon as Harshika Singh (IAS, 2012 Batch) was posted in Madhya Pradesh’s Tikamgarh district as a Collector last year, she took stock of the ground situation of the district under her vigil.

The results of her investigations were grim.

Besides the skewed sex ratio, the district was struggling with issues like high maternal mortality rate, lack of hygiene and literacy among women.

In fact, some of the Gram Panchayats (GPs) had positive-negative sex ratios (households that gave birth to 6-7 daughters with a desire to have a son).

“The cause of all the problems is the lack of education in the district. Due to the deep-rooted nature of patriarchy, women here who are older than 30 are not even allowed to speak, let alone go out of the house for schooling,” Singh tells The Better India.

Seeing women subjugated to unrealistic customs due to lack of education propelled Singh to launch a one-of-its-kind initiative earlier this year.

What makes these schools stand out is the fact that the majority of the teachers are daughters-in-law of women who are now students.

“The beauty of having local teachers is that they can constantly motivate their fellow villagers to continue schooling. In fact, a few of them have even brought back women who had left,” says Singh.

School is in Session

When Singh presented the proposal to every GP-level government committee, she was glad to receive massive support from other officers who wanted to join the initiative.

The IAS officer was adamant. And she was prepared to go to any lengths to get her sisters to schools. She even talked to and took permission from the male members of the families to send their womenfolk to her facility.

Amidst resistance and hesitations, she was heartened to come across fathers and husbands who encouraged their loved ones to be a part of this programme.

Singh also directed the village-level heads to allot one room in Gram Panchayat Bhawan to establish the classrooms.

“We were inflexible on our decision about getting classrooms away from homes as opposed to teaching at someone’s house. This way, the women step out of their homes and fully concentrate on learning.”

Meanwhile, several officers from across the district donated hundreds of school textbooks and stationery for these Mahila Gyanalayas.

Thankfully, Singh’s efforts did not go in vain as two months into the programme, there was an average of 20-30 women per school who religiously attend the one-hour classes 3-4 days in a week.

For the convenience of the students and to make sure of maximum attendance, these classes take place in the afternoon so that women can finish their household chores.

Singh has set up a very basic academic curriculum that focuses on lessons like writing names, learning how to sign, primary maths and general awareness on hygiene and sanitation.

Though the schools have not achieved 100 per cent success in terms of attendance, the start has been impactful.

Speaking to TBI, 40-year-old Gulab, a resident of Harpura Madia, shares how her desire to study re-ignited when she heard of the schools, “I always wanted to study, but due to customs I was married off very early. When an announcement was made about the school my family encouraged me to join. So far, I have learnt to write my name and do basic calculations.”

There are other stories of how women, who were once even scared to speak in the house, now step outside with a hope to learn something new every day, all due to the resilient IAS officer.

Like, Indrakumari of Harpura Madia, who is a BCom graduate and is currently pursuing MCom. She has around 20 students, most of whom are as old as Gulab.

For Indrakumari, empowerment is getting an opportunity to teach with the encouragement and blessings from her in-laws, “I had never imagined I would be making a difference in so many lives through education. These women are very intelligent and they easily grasp what I teach. Sometimes, they force me to give them homework,” she tells TBI.

The purpose of education is to light a spark. A spark to invoke a sense of self, a sense of purpose in life, a sense of being a part of the community, the society and the world. It lends us the confidence to stand and speak up.

On International Women’s Day, March 8, Singh is all set to scale up her initiative by opening such schools across all the 323 GPS of the district. The IAS officer is helping her sisterhood in Tikamgarh find their voice.

Also Read: Once He Wished To Be a Teacher. Today Rajasthan Cop Teaches 500 Slum Kids for Free!