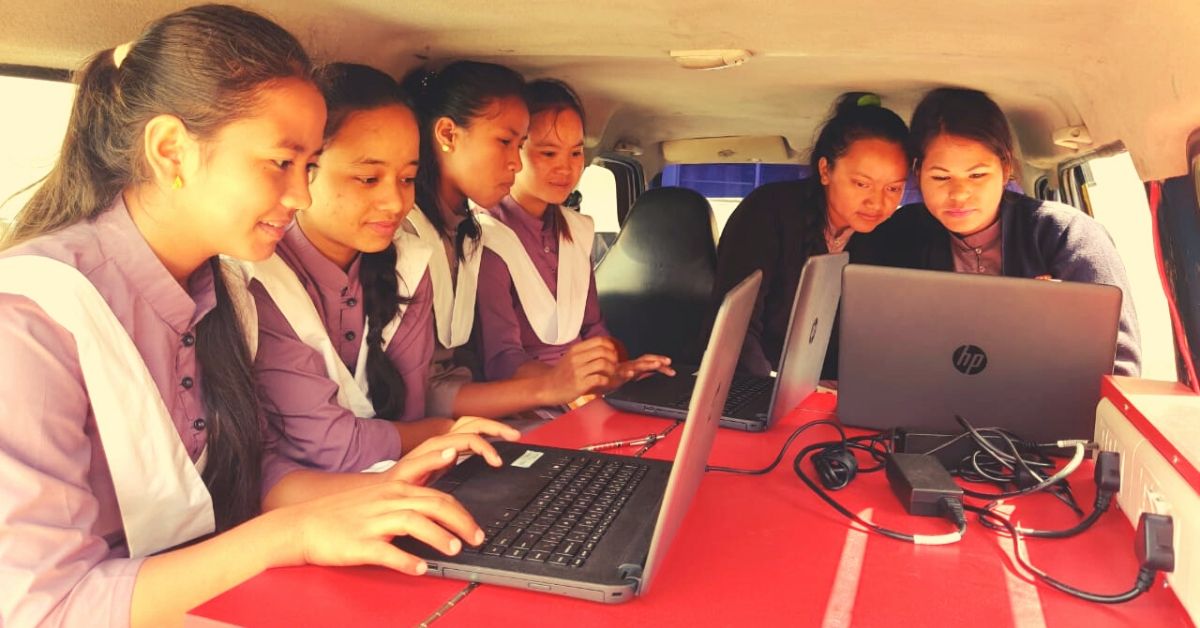 For years, lack of electricity and internet connectivity has hampered the dreams of India’s village kids. Not anymore, thanks to Project Surya Kiran! #Innovation #Education

Imagine living a day without using the internet, a smartphone or a computer. This is an era, where an increasing part of our daily lives—from buying groceries and medicines to depositing money into your bank account—is dependent on your levels of digital literacy.

Be it a simple phone call, sending a WhatsApp message, booking a cab, paying bills or booking a railway ticket, a person without the knowledge of the basics of digital literacy will find himself helpless.

Despite the urgent necessity of such literacy, what we find today is a digital divide in remote and rural India perpetuated by lack of physical access to ICT, low overall literacy levels, poor economic status and inadequate awareness.

Addressing this concern alongside the government is Edimpact, an ‘education empowerment’ organisation founded by entrepreneur Sanwill Srivastava, which formulates unique learning programs using the latest technology. With a presence in Delhi, Maharashtra, Tamil Nadu, Jharkhand and Bihar, the Edutech organisation’s objective is to make education accessible to all by delivering knowledge in a simple and affordable manner.

Rural India is deprived of digital literacy due to lack of trained professionals, unavailability of infrastructure, shoddy power supply coupled with tough terrain of interior villages. The digital divide is increasing due to lack of proper digital literacy training, which in turn results in improper and unproductive use of the internet. The concept of Project Surya Kiran (Ray of Sunlight) comes from the real issues of digital illiteracy afflicting Indian villages.

One way by which they are fulfilling their objective is by imparting information and communication technology (ICT) skills to underprivileged children in rural India through its Project Surya Kiran launched in September 2018 in Ranchi, Jharkhand, which has now expanded to other states including Bihar, Meghalaya and Karnataka.

How are they imparting ICT skills?

“We have devised a mobile computer lab which is powered by solar energy. Maruti EECO vans have been redesigned into a mobile computer lab, which can accommodate six to seven students, equipped with five laptops and a demo computer with Wi-Fi connectivity powered by 1KVA solar inverter. The system has a power backup of six to seven hours, when solar energy is not available,” says Subrata Mandal, Senior Operations Manager at Edimpact, in a conversation with The Better India, earlier this week.

Running these mobile labs are ‘facilitators’, engineering graduates, employed by Edimpact, who pre-assess knowledge of the students and based on it are taught across different levels. The content is developed in house by expert educators under the leadership of Manwill Srivastava, the Deputy Director of Content and Training. Lessons include learning the basics of operating a computer, working with Windows 10, Microsoft Office (Word, Excel, PowerPoint), internet browsing, emails, cashless transactions and cyber security, among other basic facets of digital literacy.

Thus far, the project has trained 4000+ students, while many schools and villages have benefited from it.

“Project Surya Kiran has played a vital role in our school by strengthening the basics of our students in computers and the internet through their mobile solar computer lab. First, the trainers assessed the computer knowledge of each student and prepared a syllabus. After dividing the students into two levels depending on their levels of digital literacy, they gave us a three-hour training session. Students learnt basic things like how to operate a computer, typing, file creation, internet browsing, use emails and cashless transactions, etc. We are very happy that they have completed training for 261 students from Class 8 to 10,” says Mr Ayappa, Headmaster of the Government High School in Wadgera village, Karnataka.

Of course, none of this happens without a partnership with the government and local communities.

“We consult social workers, community leaders and schools, brief them about our project and its benefits and they connect us to villages and schools. We also consult with the District Educational Officer (DEO), seeking their permission to impart our training exercise. Once it is approved, they give us a list of schools and help us get in touch with them, following which our mobile lab moves to the location with our expert Facilitators. Since the project is funded by CSR initiatives, we do not charge a single paisa from the school/community or students and in return we provide training sessions. This mobile facility is beneficial to the schools which lack infrastructure, trained facilitators and electricity,” says Subrata Mandal.

Most students trained under the Project Surya Kiran are first generation learners. They learn at their own pace like their counterparts in cities studying in better environments.

“We have come across schools where the school has the infrastructure but due to lack of awareness or apathy, their machines were not utilised. Educators are happy that they are empowered with ICT now, they know how to use it in their daily lessons,” he adds.

“The classes were conducted in a solar powered mobile computer lab. The lab itself was an attraction and the innovative way in which it was set up helped the school to function smoothly. There was no interference with the normal functioning of the school,” says Mr Josh Jose, Principal of the Khliehriat Higher Secondary School in the East Jaintia Hills district of Meghalaya. Edimpact conducted Project Surya Kiran sessions at the school from July 29 to October 11, 2019, for 800+ students from Class 9 to 12.

Speaking to The New Indian Express, Abhilash Abraham, a Training Manager at Edimpact who is overseeing the training of village school students in Yadgir district, Karnataka, says, “Nearly 90 per cent of the children in these areas do not even know about the uses of a computer, let alone how to operate one. When we told them about our programme, they were so happy. And not just students, in most of the places, we have educated youngsters as well so that they can think about starting their own business using various platforms.”

With greater access to learning comes better economic opportunities later in life. What the Project Surya Kiran is doing is offering children in rural India a chance at a better future.