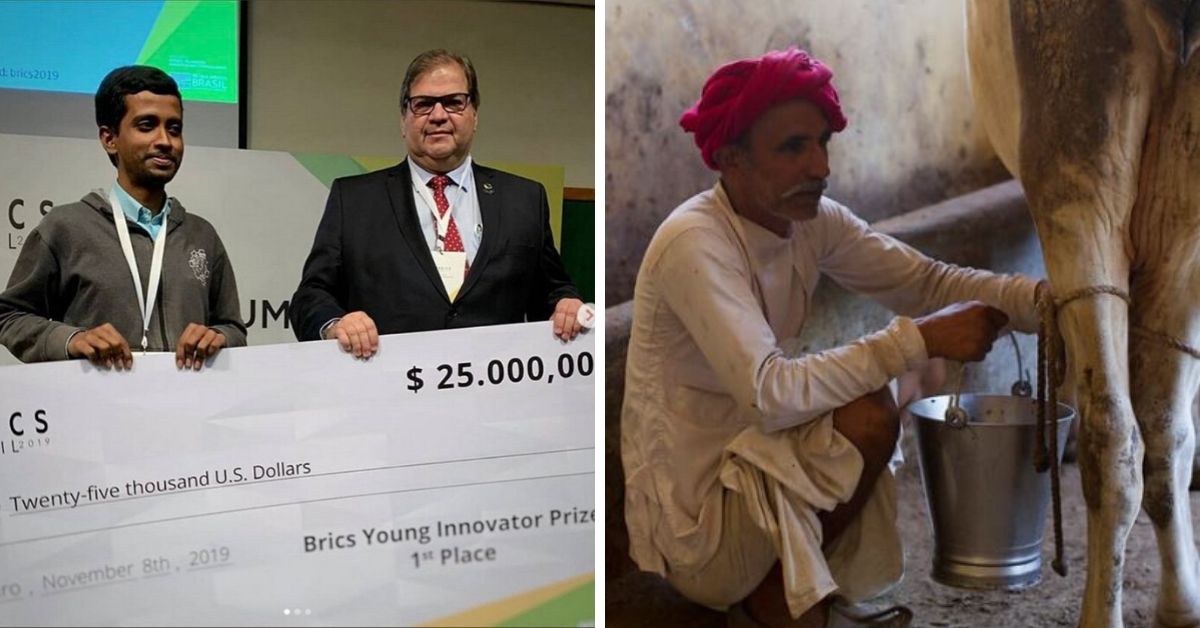 Ravi Prakash from Champaran has developed technology that can chill raw milk from 37° to 7° within 30 minutes and save milk from getting spoilt.

Though India is the world’s leading milk producer, millions of litres go to waste every year due to lack of refrigeration or feasible chilling facilities.

With an aim to solve this problem, Ravi Prakash from Bihar’s Champaran district has come up with an innovative solution for small and marginal dairy farmers.

Developed after three years of rigorous hard work, the 29-year-old has developed a nano fluid-based technology that can chill raw milk from 37° to 7° within 30 minutes.

Currently, at the prototype phase, his cooling pail device received the first prize worth $25,000 at the 4th BRICS Young Scientist Forum (YSF) held in November 2019 in Rio de Janeiro, Brazil.

Farmer’s Son Goes to the Root of the Problem

Ravi is a PhD scholar from ICAR-National Dairy Research Institute (NDRI), Bengaluru. He grew up in a small village called Harsari.

Being the son of a farmer, Ravi would often visit his green luscious fields before he moved to Karnala for his Bachelors in Technology.

“Farmers in our village, including my father, would often discuss their problems with each. Through such interactions, I learnt about the grim issue of milk spoilage. As a child, I failed to understand that the reason behind dairy farmers’ distress was something as simple as cooling milk. As I dug deep into the problem, I was motivated to find a solution,” Ravi tells The Better India.

After the fresh milk is taken from cattle, the farmers carry litres of milk to a collection centre in the village. From there, it is transported to a chilling centre.

This cycle is carried out twice a day as cattle are milked in the morning as well as evening.

High transportation costs and a rise in carbon footprints aside, this process is not viable because of the time it takes.

Milk remains fresh for around five hours, after which time it spoils, so it has be chilled in that window. The problem worsens in summers when the wastage is higher.

“Farmers who can afford cooling units are also victims, considering the irregular power cuts in the day. From all sides, farmers are the real losers with their incomes at risk. This adverse problem also affects our international trade and the health of consumers is compromised if the milk is even a bit spoilt,” he says.

How the Device Can Be A Game-Changer

With financial grants from NDRI, Ravi invested over Rs 10 lakh and innumerable hours to design a system that cools fresh raw milk from ambient temperature to below the critical limit.

Considering the gap between the demand and supply of electricity in rural areas, the pail is shaped like a steel container; it is accompanied by a charger to facilitate charging when there is power supply.

The charged pails can be used for milking along with cooling.

“The robust and durable pail is a one-time investment for dairy farmers. In terms of quality preservation and the time taken to cool milk, this pail is superior to other existing cooling systems,” adds Ravi.

The Indian Council of Agricultural Research-National, Dairy Research Institute (ICAR-NDRI), plan to collaborate with Ravi to take this technology to the grassroots. They aim to use his device on rotation, where it will be distributed to farmers on a return basis.

Presently, the pails are priced at Rs 10,000 and Ravi hopes to bring down the price further by working on different versions.