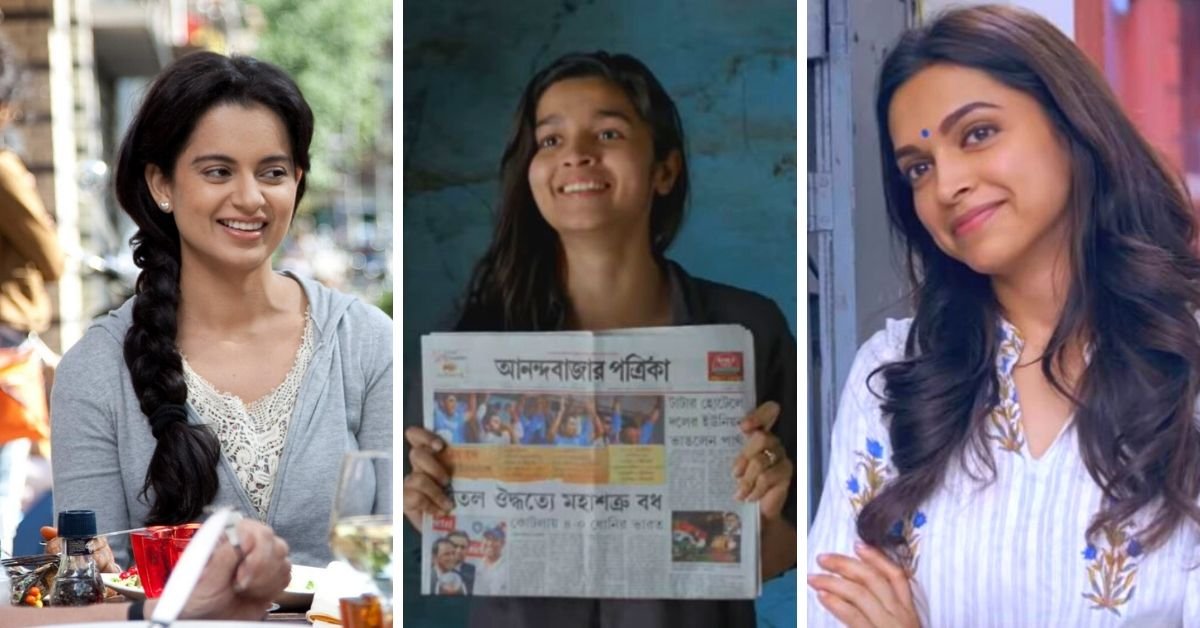 From the stunning girl with autism in 'Barfi' to normalising singlehood in 'Queen' to aggressively battling sexual harassment and horror in 'Highway', here are some exhilarating performances from the last decade.

A hero falls in love with the heroine. Since he crosses hurdles and challenges to ‘get’ her, her world revolves around him. In the end, he ‘rescues’ her from all worldly atrocities and they live happily ever after. Pick any film from Bollywood, decode the plot and you will see the ‘cinderella-isation.’

However, this is not to say that the glamorous industry has not witnessed path-breaking female-centric roles. There are but a few.

A paradigm shift was witnessed in the past decade, where filmmakers wrote meatier roles for women, celebrating womanhood. Actresses on their part also took ‘bold’ decisions (sans relying on exposing their figures) and believed that Indian audiences would accept this new wave of feminism.

Spoiler alert, here’s a look at seven such films that also went on to motivate writers to ideate and actresses to demand better roles.

Right from her entry, Vidya Balan gives you an impression of just another pregnant lady who is very careful while sitting on a chair and entering a taxi.

What one also sees is her determination to find her missing husband even if it means hacking a computer system or breaking into an old government office. It is only towards the end that the audience sees that it was she who was driving the entire narrative of the film.

As we worry about her safety from the spectacled man with a creepy smile, Mr Khan who wants to use her as a scapegoat and the serial killer on the loose, she turns out to be an agent who is out to kill the killer.

Balan’s character, the breathtaking climax and emotional ride is something that will forever be etched in Bollywood’s cinematic history.

Playing an autistic girl without being the butt of jokes and proving that a disabled character is not someone who only shouts like a ‘retard’, Priyanka Chopra Jonas delivered one her finest works in Anurag Basu’s Barfi.

The film came at a time when the industry was still male-dominant, and heroines were eager to be a part of the Rs 100-crore club. Though there are no dialogues for the then 30-year-old Priyanka in this film, her adorable yet determined expressions do the work.

Be it her love for Nanu (maternal grandfather), her affection and possessiveness towards Barfi (Ranbir Kapoor), her disgust for muck on shoes, Jhilmil comes out as a courageous figure who is ready to take on life as it comes.

Hats off to Priyanka for venturing into unknown territory with so much grace and conviction.

Rajouri-based, (a residential neighbourhood in Delhi) Rani cannot contain her excitement to get married to her love-interest Vijay (Rajkummar Rao) in the opening scene of superhit film, Queen. But little does the young bride know that her dream of being his wife will come crashing down only because Vijay thinks she is naive and uncool.

After being distressed for a couple of days, Rani (Kangana Ranaut) decides to go on her honeymoon to Europe, alone. Rani’s transformative journey on the trip is gradual but steady. Her self-confidence restores with her postponing her return ticket.

What follows is Rani dancing her heart out in a club, burping loudly, driving a car, showing her cooking skills, kissing a stranger, living with four men and finally dumping her fiance because compromising on her individuality is no more acceptable to her.

Kangana Ranaut’s character did not have to fight evils of society, go against her parents or rebel without a cause to discover her true self and shatter patriarchal norms that slide in subtly every once in a while. It was like she found her new self while retaining who she was, and this, in my opinion, is an example of brilliant character development.

Shivani is a fearless cop who is out to bust the trafficking racket and rescue girls, one of whom happens to be her daughter’s friend. Besides being mentally strong, she is also physically fit, a trait that is very rare to find in a female character. She keeps her emotions aside when necessary and fights nasty goons.

It is amazing to see Rani in a new avatar with her no make-up look. It was indeed a bold move on her part to shed her ‘heroine’ image and carry the film on her shoulders.

Though the film leaves you with a heavy heart, it also establishes faith towards the police department and respect for female cops.

Calling out your relative for sexual harassment is never easy. So it is no wonder that many such cases of abuse and assault go unreported, all to retain the family’s prestige. Director Imtiaz Ali addressed this topic in Highway, starring then-newcomer Alia Bhatt.

After playing the glamorous student, Shanaya in Student of the Year (2012), Alia shocked everyone, including the critics, with her character Veera, in Highway. Who can forget her powerful monologue where she lets out years of suppression in front of her family!

She breaks free from the conditioning to be poised and graceful in public, and like Rani in Queen, discovers herself and feels liberated even though she is in captivity.

It is very rare to see a raging character like Veera in Indian film cinema, an industry where girls and women are all about sanskar and traditions.

This excerpt from Piku‘s title track sums up Deepika Padukone’s character in the Shoojit Sircar directorial.

An architect by profession, the C R Park resident is fierce, unapologetic, ambitious, caring, and independent. Piku may not be the definition of an ideal Indian daughter but she is certainly a daughter every father wants.

Not conforming to the principles set by others, Piku does not marry, and one of the reasons is her ‘Baba’ (played by Amitabh Bachchan). She breaks the stereotype that only a son can take care of his parents and normalises singlehood.

From praying in front of her mother’s frame every time she leaves the house to making firm decisions in her personal and professional lives, she is the perfect amalgamation of modern and traditional.

The father-daughter road trip from Delhi to Kolkata surely touched the chords of our hearts.

The film revolves around Akash (Ayushmann Khurrana) who wants to build his name as a pianist by moving out of India and playing blind. A victim of unfavourable circumstances, he comes in contact with Simi, a housewife of a yesteryear superstar.

In the turn of events, you see Tabu, a step-mother, being an accomplice to the murder of her own husband. In the next scene, she effortlessly throws her old neighbour from the building to erase suspicions. Simi then falls into a trap and is blackmailed for money by Akash, who has seen her commit the heinous crimes.

Mind you, at no point in the film, does Simi feel victimised, guilty or vulnerable.

Tabu’s flawed yet honest character is strong or at least pretends to be. With no insight into her past, one can only guess the reasons behind her not-a-single-flinch expression while killing the poor lady.

Though as an audience, we can differentiate between right and wrong, accepting Simi as the film’s antagonist is challenging. Personally, this is one Bollywood ‘villain’ that I rooted for. Writing strong and honest female characters is not a difficult task if actresses are courageous enough to play flawed characters. It is no wonder that director Sriram Raghavan kept Tabu in mind while writing the script.

So, who is your favourite female character?