Serenity & Ceramics: How Auroville’s Potters Come up With Their World-Famous Art 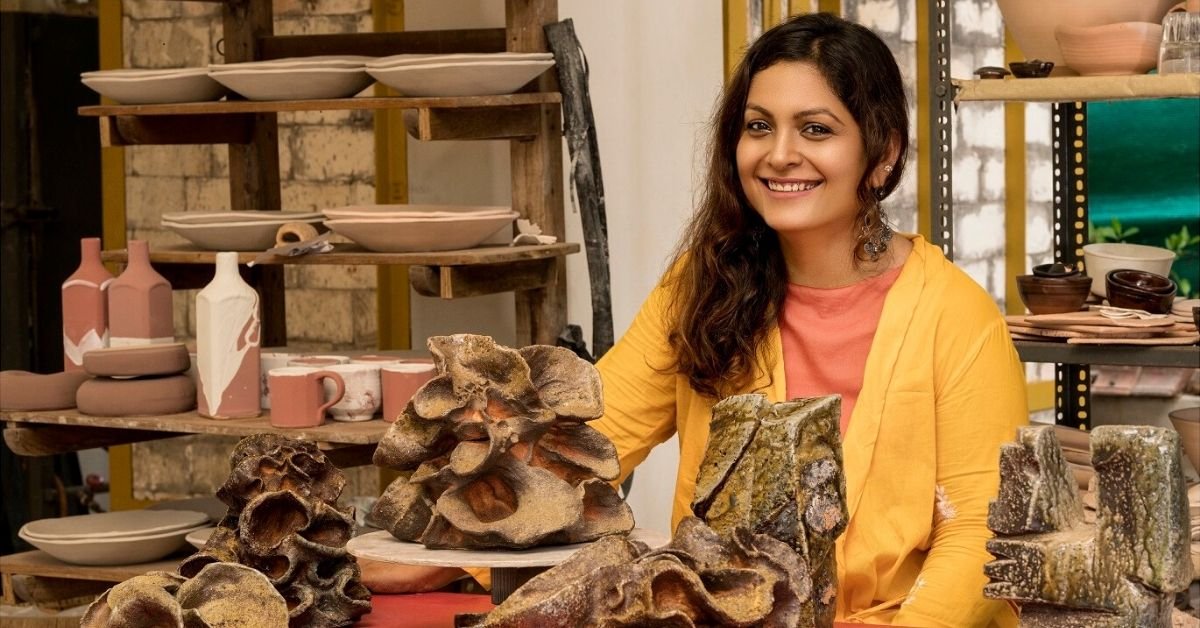 When we think of good ceramics, the image that comes to mind is of simple earth or ash-coloured handmade elite tableware. They all come from the Union Territory of Puducherry and its neighbouring town, Auroville. It’s their simplicity which has got them a worldwide market. In fact, outside of this region, they are sold only in boutiques or high-end shops.

For many of us, ceramic means tableware like cups, saucers, bowls, vases, or plates. One peep into potters’ bhattis (kilns) in and around Auroville and Puducherry will change this misconception.

Are you always looking for unique ceramics to add to your collection? Check out these beautiful pieces that will elevate your home’s elegance, while also supporting traditional artisans.

You will be blown away by the experimentation and the utter uniqueness of each creation coming out of these kilns. If you aren’t told that they are glazed ceramic or stoneware products, you will certainly mistake them for modern art, sculptures, or some other unique pieces.

Master potter Sandeep Manchekar of Anvi Pottery near Mumbai, explains, “Puducherry is the Kashi of ceramic pottery. Nearly five decades ago, the modern world of pottery or stoneware began there, later spreading to different parts of India.”

In fact, when we think of good ceramics, the image that comes to mind is of simple earth or ash-coloured handmade elite tableware. They are so stylish that every city dweller with money in their kitty aspires to own at least a couple of such coffee mugs if not the entire array of such handmade tableware. They all come from the Union Territory of Puducherry and its neighbouring town, Auroville. It’s their simplicity which has got them a worldwide market.

In fact, outside of this region, they are sold only in boutiques or high-end shops.

Puducherry now has a parallel niche of studio potters, who of course, still make the usual tableware “for sustenance” as they laughingly admit, but they have stepped out of their comfort zones to indulge their creative sides.

Not only do they try different shapes and sizes, but they also experiment with textures, colours and firing techniques to come up with unique pieces. The final product looks like abstract art that sometimes makes a social or political statement but majorly helps to enhance interiors.

In India, there are only a couple of pottery hubs famous for their distinctive pottery. From the South, the century-old red clay terracotta products range from small household items to the large Iyengar horses; in Rajasthan, the Jaipur pottery is famous for its blue decorative vases, jars, wall plates; and then there is the ornamentally painted tableware from Banaras.

Besides these main pottery hubs, there is also a small hub of potters in the north-east state of Manipur. These products are different from the rest of India. They are black and make for amazing tableware.

The domination of Puducherry and Auroville pottery has an interesting story. It began somewhere in the early 1970s with Deborah Smith, a graduate in the Japanese language, who studied pottery in the US.

Later, while in Japan to enhance her craft, she pursued pottery for more than two years. She was an ardent follower of spiritual guru Sri Aurobindo and his disciple, Mirra Alfassa. When Deborah followed Mirra to India, she was asked to start a craft which would involve the local people of Puducherry and give them a decent livelihood.

Deborah thought of pottery as the locals were skilled in traditional terracotta. So, in 1971, along with Ray Meeker, another American ceramic potter, she set up Golden Bridge Pottery (GBP) in Puducherry.

GBP changed the pottery scene in India. It was from here that the journey of many present-day potters began. For the first time, Indian potters understood high-temperature firing, gas firing, soda firing, besides the traditional wood firing kilns and glazing.

“I can safely say that if Ray and Deborah hadn’t planted their roots in Puducherry with GBP, the thriving scene of studio ceramics and functional stoneware wouldn’t be around,” declares Auroville-based Adil Writer of Mandala Studio.

A former architect and interior designer from Mumbai, Adil decided to add pottery to his skills and joined a seven-month course at GBP in 1998. Since then, the potter’s clay has him hooked. Working, learning, experimenting at this studio for three more years, he decided to join Mandala Pottery in Auroville, creating more magic with clay.

No more a professional architect, Adil’s creations still have an architectural touch to them. But his latest series of baby-faced figurines titled ‘Sweet Dreams’ is more of a sculpture, where ceramic dolls are created in different poses and grouped with several objects. Though he doesn’t like to admit it, many of his creations make strong social observations and statements.

In fact, just as every artist has a signature line identifying their works, even studio potters have a mark of their own. Like Rakhee Kane of Aavartan Studio Pottery in Auroville. If you see ceramic pottery with a marbled texture or a glazed product with small painted motifs, you can be sure the pottery has come from her.

An alumna of Industrial Ceramics at National Institute of Design, Ahmedabad, Rakhee brings to her works her training as a painter. She is very interested in the pottery made and used in rural India, especially the architecture and landscape of Rajasthan. Her ceramic plaques are really big and resemble the large brass plates from the desert state, used either as table or wall decorations. She admits she loves to paint and makes different surfaces on her pottery.

Her recent work, titled ‘Shifting Identities’, has been highly appreciated. It has three-dimensional ceramic walls in raw multi-coloured clay.

After NID and a few years of work, Rakhee too entered GBP in 2005, to enhance her ceramic pottery skills. Laughingly, she admits that nearly every studio potter in and around Auroville is a product of GBP. “We come to learn from GBP and get so enchanted by the pottery and the conducive atmosphere that we stay put there.”

“And why not?” asks Sandeep. “More than 100 potters get a chance to stay close to each other, exchange ideas and interact with visiting potters, both Indian and foreign. Naturally, Auroville has become a great place for studio potters and a training centre for many.”

To this, Rakhee adds that people trained in Aavartan and Auroville have started their own studios. Even if they are not highly creative, they make good utilitarian products, which are in demand. Adil says that it contributes to a vast and healthy expanse of ceramic work.

“Another important reason for potters to stay put in this region is the easy availability of all raw materials (clay, wood), along with a ready-made market. Puducherry and Auroville are famous for pottery, so buyers from all over come seeking us and our products. We rarely need to go out,” says Indrani Singh Cassime of Phoenix Potteries and Studio.

A Visual Art Graduate, this Delhite was wooed to Puducherry by her then-boyfriend and now husband. She is another brilliant product of GBP who specialises in murals, utility, and lighting products. Indrani is an independent studio potter and isn’t connected with Auroville, although her studio is located close by.

In her Anagama kiln, she fires bigger pottery items resembling centuries-old stone relics found in archaeological sites. Her chirpy self finds resemblance in her ceramic lamps which are delicate, look ethereal and are highly decorative. In her studio, she holds residencies for potters from all over.

Also Read: End Of An Era: Music Legends On What Working With The Amazing Khayyam Was Like

One can be envious of these studio potters who lead a very contented life—they have large spaces for their studios, where three or four kilns can be easily installed, with clay being sourced from the nearby large Ousteri Lake (800 hectares shared by both Tamil Nadu and Puducherry). The wood to fire comes from Casuarina trees which are grown as cash crops in and around this Union Territory.

Plus, they have an added advantage of the ready-made market for the sale of their products. What more can any studio potter or artist ask for?