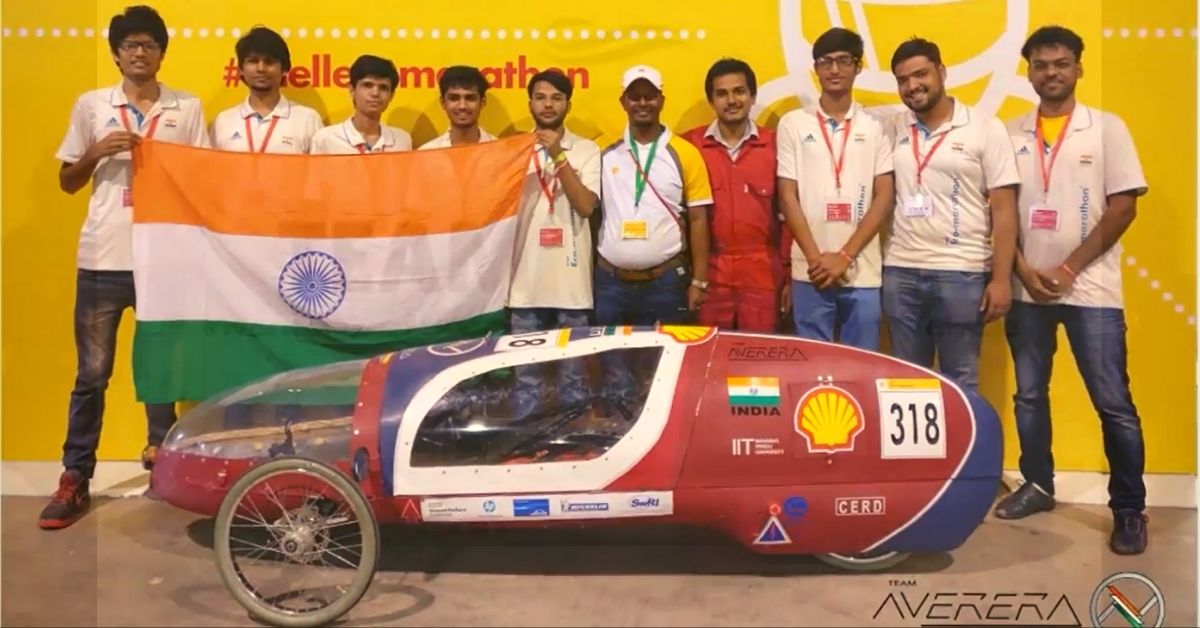 “More than 75% of electricity production takes place by burning fossil fuels. The best green solution is to increase the efficiency of electric vehicles.” #ShellEcoMarathon #MakeTheFuture

This article has been sponsored by Shell

Failures are nothing more than stepping stones that lead to big success – this is what generations of engineering students at Team AVERERA, IIT (BHU) Varanasi, have been teaching each other.

From every puncture to every breakdown and motor blow-outs, this team of 24 has stuck together to build four such vehicles that can be called the models of efficiency in the automobile sector.

The team, in 2018, built a unique electric three-wheeler – Alterno – weighing not more than 40 kgs. Alterno helped them achieve a staggering efficiency of 349.6 km/kWh at last year’s Shell Eco-marathon (SEMS) in Chennai. They won the title of the 3rd most fuel-efficient electric vehicle in Asia and the 1st in India.

Later, in the Shell Eco-marathon held in Malaysia in 2019, the team bagged the second position in the battery-electric prototype category.

But, like most inspiring journeys, Averera’s was also paved with a number of difficulties.

“While the team was established in 2013, we began participating in SEMS in 2015. With each year, our growth has been exponential. In 2015, we were one of the few teams to represent India at SEMS but could not clear the technical inspection round due to lack of experience. In 2016, we cleared that round and just before hitting the track for the run, our motor controller blew as it was not able to cope up with humid conditions at the event site in the Philippines,” says 21-year-old Himanshu, a 4th year Mechanical Engineering student.

According to Himanshu, the team hopes to create Asia’s most fuel-efficient vehicle and bring laurels to the country. For that, Alterno has undergone a number of modifications, like carbon fibre monocoque chassis, tear-drop aerodynamic shape implementation of neural networks for efficiency optimisation, and weight control to under 40 kg.

“Also, the drag coefficient of the prototype is lower than most on-road cars, at 0.097. We have also designed a special brushless DC motor (BLDC) motor controller which is specifically optimised for achieving efficiency according to the track conditions,” he says.

Owing to many such modifications, in the latest competition, Alterno 4.1 managed an efficiency of 462.5 km/kWh. The next step is to increase the mileage by a few points up to 550 km/kWh, shares Himanshu.

Himanshu adds that the main objective behind creating such a vehicle was to tackle environmental issues.

“More than 75 per cent of electricity production takes place by burning fossil fuels, so the use of only electric vehicles is not enough to make India green. It will create the same amount of pollution as a normal I.C. engine car does. The best solution is to increase the efficiency of electric vehicles. The Shell Eco-marathon provides us with the best platform as we can constantly keep ourselves up to the standards of the best in the world,” he says.

“Doing a project like this helps us explore various aspects of practical, academic and financial knowledge. And, one of the most important lessons here is of leadership. Each and every member is crucial to AVERERA and is truly a leader in their own right,”

After numerous failures, the Team has finally created a model they are truly proud of.

“I cannot put into words how happy we were when the car ran successfully for the first time. And, when all that hard work was finally recognised and appreciated we all were overwhelmed. It was a magical moment of joy!” he concludes.

Also Read: 129 Km in Just 1 Litre Petrol: VIT Students May Just Have Built the Car of the Future!